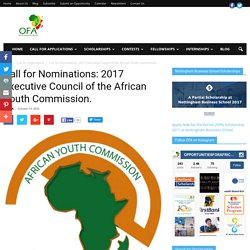 The African Youth Commission is the pan African youth version of the African Union Commission, representing the voice of youth and regional youth organizations across the African continent and Diaspora. It’s the unique platform for young people from 55 African countries (including the Kingdom of Morocco). To fit the criteria for nomination, candidates: Read the present constitution, including expected roles and responsibilities of executive council officials.

The following positions are available and will be served for a two-year term: The first Executive Council elections would be conducted on transparent and democratic process of one vote per active member at the General Assembly plenary session in Addis Ababa, January 2017 and then, on the same timeframe, of every third year thereafter. Women Techmakers Scholars Program 2017/18 - North America, Middle East, Europ... Deadline: December 1, 2016 Applications are invited for the Women Techmakers Scholars Program- formerly known as Google Anita Borg Memorial Scholarship Program. 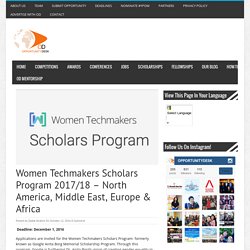 Through this program, Google is furthering Dr. Anita Borg’s vision of creating gender equality in the field of computer science by encouraging women to excel in computing and technology and become active leaders and role models in the field. Scholars Components The Scholars program includes the following: An academic scholarship, awarded based on academic performance, leadership, and impact on the community of women in tech.An opportunity to connect with fellow scholars and Google mentors, while participating in professional and personal development trainings and workshops.An online network with fellow scholars program participants designed to share resources, support the global community of women in tech and collaborate on projects to make continued impact. 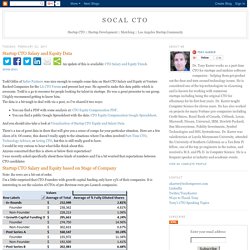 He agreed to make this data public which is awesome. Todd is a go to resource for people looking for talent in startups. He was a great presenter to our group. I highly recommend getting to know him. There's a ton of great data in there that will give you a sense of comps for your particular situation. Startup CTO Salary and Equity based on Stage of Company Note: the rows are a bit out of order.

Total Funding Revenue. Bluemix - Getting started. ‫هنساعدك تبدأ. Flipboard. مبادرة نزاع عابر. Team. Apply for Oxford-Weidenfeld and Hoffmann Scholarships and Leadership Programm... Bachelor 24.09.2016 Deadline: 6 or 20 January 2017Open to: Applicants who are applying to start a new graduate course at OxfordScholarship: 100% of University and college fees and a grant for living costs (at least £14,296) Description The Oxford-Weidenfeld and Hoffmann Scholarships and Leadership Programme was established in 2015 thanks to generous donations from multiple donors to mark the 95th birthday of Lord Weidenfeld. 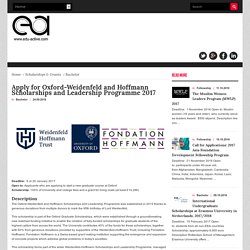 This scholarship is part of the Oxford Graduate Scholarships, which were established through a groundbreaking new matched funding initiative to enable the creation of fully-funded scholarships for graduate students of the highest calibre from across the world. The University contributes 40% of the funds for these scholarships, together with 60% from generous donations provided by supporters of the Weidenfeld-Hoffmann Trust, including Fondation Hoffmann. Scholarships are tenable in following subjects: Eligibility Scholarship Application The official web-page. Al-Nayzak. The Only 10 Slides You Need in Your Pitch. 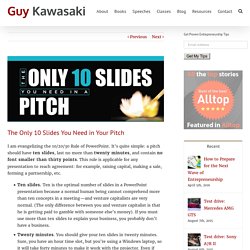 It’s quite simple: a pitch should have ten slides, last no more than twenty minutes, and contain no font smaller than thirty points. This rule is applicable for any presentation to reach agreement: for example, raising capital, making a sale, forming a partnership, etc. Ten slides. Ten is the optimal number of slides in a PowerPoint presentation because a normal human being cannot comprehend more than ten concepts in a meeting—and venture capitalists are very normal. (The only difference between you and venture capitalist is that he is getting paid to gamble with someone else’s money). The infographic created in collaboration with my friends at Visually will help you fine tune what to put on your ten slides. Share This Story, Choose Your Platform!

Guy Kawasaki is the chief evangelist of Canva, an online graphic design tool.