Khabess Affairs keeps you in touch with current happening arround the world.Here you can find all about your interest with the elements of fun,entertainment and commedy. Along with fun national and international matters are also elaborated here.Our news are based on concreteness in a concise manner.We aware our viewers about latest oppertunities,technology usage and development in he world. For more information and details please visit our website. 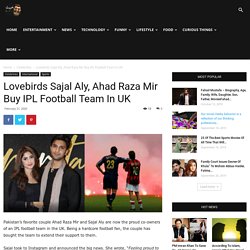 Being a hardcore football fan, the couple has bought the team to extend their support to them. Sajal took to Instagram and announced the big news. She wrote, “Feeling proud to announce Derby Crusaders – the fourth and final IPLSOCCER team with Ahad Raza Mir, and Noreen Khan named as my co-owners.” “I’ve always been wanting to promote and support sports for girls in Pakistan. This is my step in doing so,” she further added. Ahad also shared his excitement to be part of the event through Instagram.

“The Derby Crusaders! IPL Soccer is a competitive seven-a-side indoor football competition in the UK. The tournament aims to provide the opportunity to Asians living in the UK to showcase their talents on a bigger platform. The tournament is scheduled to start in June 2020. Google completes first drone delivery in the US. Alphabet (Google) subsidiary Wing has become the first company in the United States to deliver packages by drone. 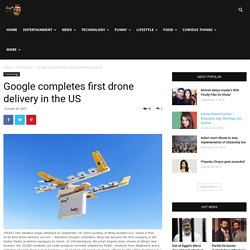 In Christiansburg, the small Virginia town chosen as Wing’s test location, the 22,000 residents can order products normally shipped by FedEx, medicine from Walgreens and a selection of candy from a local business — all of which will arrive via drone. Wing, which already operates in two Australian cities as well as Helsinki, announced in a statement that the first drone-powered deliveries had taken place Friday afternoon in Christiansburg, “paving the way for the most advanced drone delivery service in the nation”.

One family used the Wing app to order Tylenol, cough drops, Vitamin C tablets, bottled water and tissues, the statement said. An older resident ordered a birthday present for his wife. Although the majority of the delivery was done by a FedEx truck, the last mile was completed by drone. Once they have arrived at their destination, the drones don’t land. Facebook and Twitter are not 'neutral bulletin boards' FACEBOOK and Twitter are not the neutral bulletin boards they claim to be, but are instead carefully created hierarchies of intervention made by those who run these tech giants, said Senator Sherry Rehman during a panel discussion at the London edition of the Lahore Literature Festival (LLF) this weekend. 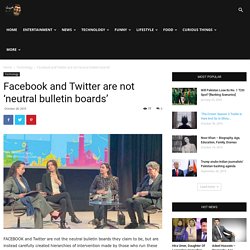 The session, which discussed the dark side of social platforms such as Twitter and Facebook, also featured as panelists the popular Turkish author Elif Shafak as well as the illustrious Alan Rusbridger, a former editor of the Guardian who is now the principal of Lady Margaret Hall at Oxford University. The talk was moderated by BBC journalist Yalda Hakim. The theme, “Negotiating the imperative of liberty”, touched on an assessment of whether and how citizens and journalists can defend civil liberties in a new world order of fake news and information overload.

“It’s hard to understand if you are from the previous era.” They cannot just get away with saying we are just publishing. TikTok Beats Facebook To Become 2nd Most Downloaded App. The craziest thing about technology is that it never seems to simmer down. 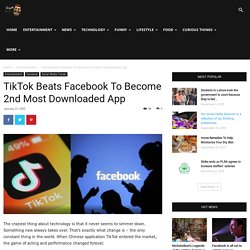 Something new always takes over. That’s exactly what change is – the only constant thing in the world. When Chinese application TikTok entered the market, the game of acting and performance changed forever. Similarly, when Facebook hit its peak, people thought there would be nothing more addictive. Enter TikTok. Tik-Tok now only stands behind a firm WhatsApp (which too is a Facebook product) on the number of unique downloads.