Video and Voice Calls in Your Browser, No Plugins. Until now, video calling from your computer has required dedicated apps such as Skype or browser plugins like Flash that power the likes of Vox.io.

However, the similarly-named Voxeo Labs has been cooking up something impressive; plugin-free video and voice calls in a browser. Using its own Phono SDK, Voxeo Labs has demoed a way of making calls using the WebRTC technology included in the Canary build of Google’s Chrome browser. Backed by Google, Mozilla and Opera, WebRTC is an open source project that allows developers to create real-time communications apps for the Web via Javascript APIs and HTML5. The Phono SDK also allows for real-time presence and chat capabilities, meaning that developers should be able to create Google Talk or Skype-like services with ease. The technology even supports standard phones, so you could call a friend’s browser from your landline, for example. 8 tools to make your website for free. It’s the truth that sometimes we have to and want to produce web sites on a budget. 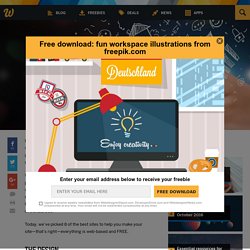 It’s also true that sometimes we may just want to put up and create some sites for fun, so we don’t want to spend a ton of money on them. Well fortunately, that’s where the web comes in. There are so many great technological advances that allow us to create and put up websites, not just on a budget but for free. From web design to development, there are all-free services that allow us to create PROFESSIONAL web sites, not just template-based sites reminiscent of the late 90s. Today, we’ve picked 8 of the best sites to help you make your site—that’s right—everything is web-based and FREE. The design For many of us who are designers, we may start out with the design of the web site. Phoenix by Aviary What the developers say: 20 Social Media Tips for your Blog. Flexible Working: 8 Top Tips.

Stunning Research Projects Realize Holographic 3-D Display and See Through Monitor [VIDEO] These prototypes may never become consumer products, but they integrate popular functions and help develop other uses and ideas that will show up in gadgets. 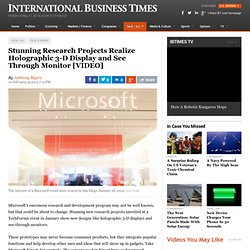 Take Microsoft Kinect, for example. The sensors used in Kinect have so far proved extremely capable, to the point that people keep hacking new uses out of them. It should come as no surprise then that Microsoft engineers are also using Kinect-like powers to create something called the Holoreflector. It's a kind of augmented reality display using a giant mirror and giant LCD panel. It even uses what Microsoft is calling sensor fusion to combine the sensor uses on the Kinect and on a Windows Phone. Next is the 3-D desktop with interactive display and see-through OLED monitor.

Finally, there is the Illumishare remote shared-space device. Tell us in the comments if your mind is as blown as ours! Orange and Visa Bring Enhanced Mobile Payments to MENA. France Telecom-Orange has announced a new partnership with Visa, enhancing its current mobile payment option, Orange Money, available to its customers in the Middle East and Africa (MENA). 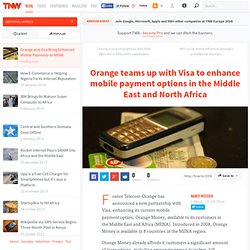 Introduced in 2008, Orange Money is available in 8 countries in the MENA region. Orange Money already affords it customers a significant amount of transactions, including person-to-person transfers, bill payments, and loading or withdrawing funds. With the introduction of Visa Mobile Prepaid in select markets by the end of the year, Orange customers will also be able to make person-to-person payments, retail and e-commerce purchases and withdraw cash at Visa ATMs. The option to use Visa Mobile Prepaid accounts, together with their Orange Money accounts gives customers access to 30 million merchants and 1.9 million ATMs worldwide. Orange already provides payment options to 3.5 million unbanked mobile subscribers in Africa. 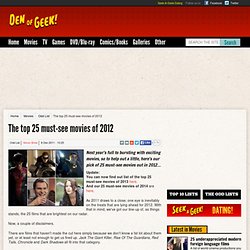 As 2011 draws to a close, one eye is inevitably on the treats that are lying ahead for 2012. With that in mind, we've got our line-up of, as things stands, the 25 films that are brightest on our radar. Now, a couple of disclaimers. There are films that haven't made the cut here simply because we don't know a fat lot about them yet, or at least not enough to get us fired up. Jack The Giant Killer, Rise Of The Guardians, Red Tails, Chronicle and Dark Shadows all fit into that category. Plus there are the films that we suspect will turn out strongly, but what we've seen of them so far hasn't blown us away (Brave, Skyfall). We've also had to exclude films that have already had a release in either the UK or the US. However, that's still left us with a lot of tasty cinema. American Pie: The Reunion, though, is looking more promising. It’s got promise, this one.