Need for Emergency Evacuation and Medical Coverage in Canada. You're probably asking yourself “Why do I need international travel medical insurance? 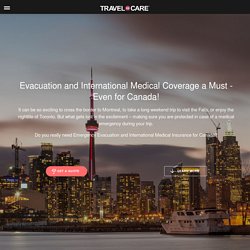 I'm just going to Canada for the weekend, and I have great coverage through my U.S. health insurance plan!” Well, U.S. health insurance is not the same as Emergency Evacuation and International Medical Insurance. It is easy to forget that U.S. based health plans generally provide no coverage for hospital stays or other medical bills when traveling abroad, just as it is easy to forget that Canada is abroad! Climb Every Mountain Until the Altitude Sickness Kicks In. You ignore these symptoms, telling yourself that you are out of shape and needed to prepare more for these athletic endeavors. 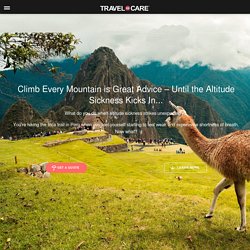 You resolve to go to the gym more when you get back home, never mind the fact that you regularly run 5Ks and participate in various group sporting events. So you continue on your trek, but after a few more minutes you start to get dizzy, and feel nauseous. Shaking, you realize something is really wrong. You try to call to your guide, but find that it is too much effort. You pass out, and find yourself awoken by the smell of a noxious tonic that the local healer swears will cure your altitude sickness – but not for a few days while your body adjusts to the heightened altitude. All you wanted to do was eat tons of the freshest ceviche you will ever find, drink your weight in pisco sours, pet an alpaca, taste cuy al horno (roasted guinea pig – how adventurous of you!) Need for Emergency Evacuation and Medical Coverage in Vietnam. It's your first trip overseas, and you are in Vietnam and feel so free. 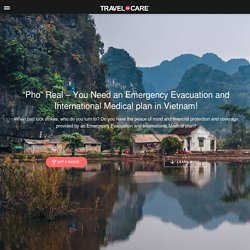 You rented a motorcycle for ease of travel, and have been having a merry old time hiking along rice paddies, crawling through the Cu Chi Tunnels in Ho Chi Minh City, swimming in the crystal-clear waters of Nha Trang, Mui Ne, and Phu Quoc, and eating your weight in pho and spring and steamed rolls from street-side eateries. However, two weeks into your month-long trip, you crash your motorcycle! You don’t get badly hurt, but you sustain a broken leg, scrapes and burns, but between the medical bills and trying to find the right doctor in a land where you don’t speak the language, it is both stressful and complicated especially when ill or injured. Beyond the mental stress, the endeavor could seriously set you back financially. Travel Medicine Software for Medical Professionals. International Emergency Evacuation, Travel Medical Insurance. 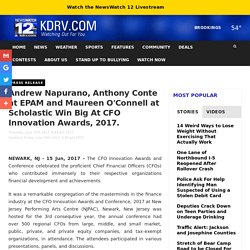 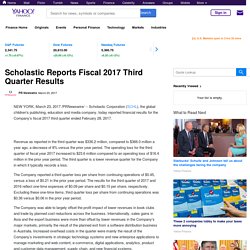 The Company distributed $5.2 million in dividends during the third quarter. One-Time Items. Maureen O'Connell. Why CFOs Need to Collaborate with CIOs. 6-things-you-didn-t-know-about-scholastic-the. Hearing the name Scholastic brings me back to elementary school days when the teacher would hand out catalogs filled with children's books for us to flip through before the upcoming book fair. 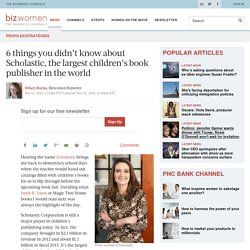 Deciding what Junie B. Jones or Magic Tree House books I would read next was always the highlight of the day. Scholastic Corporation is still a major player in children's publishing today. In fact, the company brought in $2.1 billion in revenue in 2012 and about $1.7 billion in fiscal 2013. It's the largest children's book publisher in the world, famous for titles such as "The Hunger Games" and "Clifford the Big Red Dog. " I talked recently with several top female executives at Scholastic (and there are a lot) about how exactly the company has stayed so strong, despite massive changes that have challenged many established names in the publishing industry. Here are six things you probably didn't know about Scholastic, from its storied (pun intended) past to its successful present:

Maureen O’Connell. Why CFOs Need To Be Chief Future Officers.