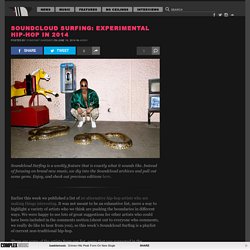 Instead of focusing on brand new music, we dig into the Soundcloud archives and pull out some gems. Enjoy, and check out previous editions here. Midnight-Galactic (M83 vs Beastie Boys) Kid Cudi 'Make Her Say' Free hip hop and rap music playlist. StumbleUpon. The Notorious B.I.G. f/ Method Man "The What" (1994) - The 50 Best Notorious B.I.G. Songs. XXL Freshman Class 2014 Review. Every year, XXL releases its "Freshman Class" to much scrutiny and this year is no different. 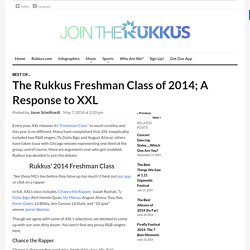 Many have complained that XXL inexplicably included two R&B singers (Ty Dolla $ign and August Alsina), others have taken issue with Chicago emcees representing one third of the group, and of course, there are arguments over who got snubbed. Rukkus has decided to join the debate. *See these MCs live before they blow up too much! Check out our app or click on a rapper. In full, XXL's class includes: Chance the Rapper, Isaiah Rashah, Ty Dolla $ign, Rich Homie Quan, Vic Mensa, August Alsina, Troy Ave, Kevin Gates, Lil Bibby, Jon Connor, Lil Durk, and "10 spot" winner Jarren Benton. 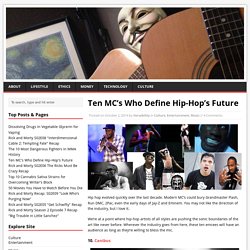 Modern MC’s could bury Grandmaster Flash, Run DMC, 2Pac, even the early days of Jay-Z and Eminem. You may not like the direction of the industry, but I love it. We’re at a point where hip-hop artists of all styles are pushing the sonic boundaries of the art like never before. Wherever the industry goes from here, these ten emcees will have an audience as long as they’re willing to bless the mic. 10. Having dominated battle rap longer than Slim Shady hated him, Canibus made a name for himself in the underground beef circles. Solo albums recently include Lyrical Law (2011) and Fait Accompli (2014), along with HRSMN and other collab projects remove old school rappers Bus rips jackers. Canibus spits a non-stop arsenal of lyrics, spanning a breath of subject matter and philosophies you can’t help but enjoy. Check out Canibus on Amazon to support this blog 9. British MC and bassline junkie Dizzee Rascal has been on the block for a few years now. 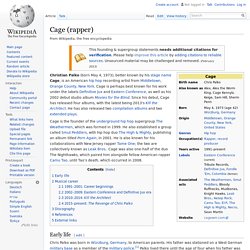 Cage is perhaps best known for his work under the labels Definitive Jux and Eastern Conference, as well as his 2002 debut studio album Movies for the Blind. Since his debut, Cage has released four albums, with the latest being 2013's Kill the Architect. He has also released two compilation albums and two extended plays. Because Palko felt that he should no longer play a character, he began to take on a more open writing style,[3] and signed with Definitive Jux, where he released his second studio album Hell's Winter, on September 20, 2005. Cannibal Ox. Cannibal Ox is an American underground hip hop duo from Harlem, New York, United States. 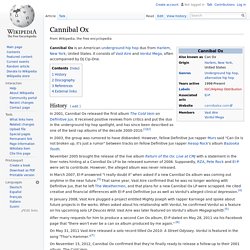 It consists of Vast Aire and Vordul Mega, often accompanied by DJ Cip-One. History[edit] In 2001, Cannibal Ox released the first album The Cold Vein on Definitive Jux. Take These Words Home & Think It Through (10 songs) StumbleUpon. 13 Rap Songs Covered as Awesome Instrumentals - Photo. Jeff "Chairman" Mao, a co-founder of Ego Trip and a member of the Red Bull Music Academy team, has put together a playlist of 13 rap songs covered as instrumentals. 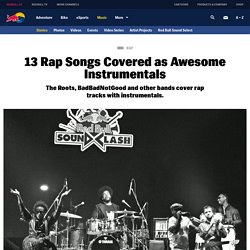 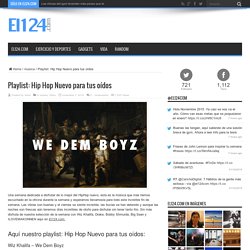 20 Hip Hop Albums You Must Hear Before You Die - Page 15. LPs that will change your life. 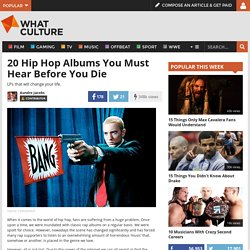 When it comes to the world of hip hop, fans are suffering from a huge problem. Once upon a time, we were inundated with classic rap albums on a regular basis. We were spoilt for choice. However, nowadays the scene has changed significantly and has forced many rap supporters to listen to an overwhelming amount of horrendous ‘music’ that, somehow or another, is placed in the genre we love. However, all is not lost. From Kanye West to Killer Mike, this article looks at the lowdown on the best of the best to ever come from the scene to not only restore your faith in hip hop, but possibly even get you to throw on your Timbaland boots, baggy jeans and an oversized basketball jersey again for the first time in 20 years. 15 Of The Greatest Stoner Songs Of All Time. Rocking to music while you are blowed is as natural to weed smokers as their regular trips to the refrigerator. 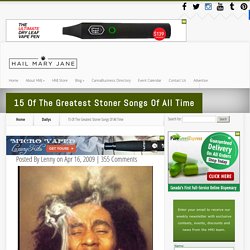 There is something about zoning out, listening to your favorite kind of music and drifting off into it that is just so lovely. Music sounds way better while high and I have personally found some of my all time favorite songs while under the influence. The 50 Greatest Hip Hop Albums of All Time. Written by Ben Pogany The Notorious BIG- Ready to Die -(1994) Around the years '87-'88, a young crack dealer named Christopher Wallace began entertaining local passersby by rapping into a beat-up amp on the street corners around Bedford-Stuyvesant, Brooklyn. 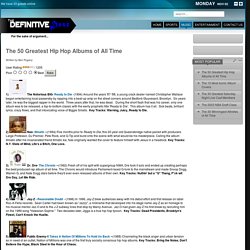 The 50 Best Hip-Hop Songs of 2011 (#50-1) Everything the White Girl Mob learned, they learned from the above commercial. This is no time for circumlocution. There are songs to argue about. Everything is explained below. Some guys got it, some guys don’t. Related — Passion of the Weiss Top Hip Hop Songs List: 2010, 2009, 2008, 2007 50. Some free underground hip hop albums. Top Rap Songs of All Time. Rap has always been a hit with Afro-Americans. Now, with names as diverse as Eminem, Fort Minor, Ludacris and 50 Cent giving some really great rap songs for all music lovers to listen to, rap music has cut across this barrier of race and is a very popular music genre among millions of people worldwide.

Initially considered as just a fad, rap music has come a long way since the 1970s, the time when these songs became popular for the first time. Some of the best rappers have given such great music that they really deserve a place in the list of the greatest rap musicians. However, considering the quality of songs that have been produced by the rap music industry, to come up with top 10 songs can be quite a task. Nevertheless, given below is a carefully selected list of rap songs. Free hip hop and rap music playlist. Kendrick Lamar: ‘I am Trayvon Martin. I’m all of these kids’ Last year, the director of the US Centers for Disease Control and Prevention presented research demonstrating that “youth living in inner cities show a higher prevalence of post-traumatic stress disorder than soldiers”.

The report estimates that 30% of young people in urban “combat zones” suffer from some form of PTSD. When I mention this to Kendrick Lamar, he nods and says: “That’s real.” Recently, he was making the video for his new single, Alright, when he was startled by a loud bang. In a split second the successful 28-year-old rapper disappeared and the wary teenager from the streets of Compton, California resurfaced. Kendrick Lamar - King Kunta. Free rap & hip hop and hip hop music playlist. Kanye West, Travis Scott Get Creepy in 'Piss on Your Grave' Video. Travis Scott and Kanye West recently teamed for "Piss on Your Grave," an off-kilter, hallucinatory track from Scott's debut LP, Rodeo. Now the G.O.O.D. Music duo have united for the song's brooding music video, which features the rappers hanging out in an evil, foggy forest.

The clip, directed by Nabil, finds the duo delivering their bizarre urination boats ("I use your face as a urinal / then do the same at your funeral," West rhymes) between shots of muddy skeletons and masked men. The track, which echoes the confrontational style of West's 2013 LP, Yeezus, follows a disjointed path through sludgy, psychedelic guitar riffs and lumbering, flanged drums.

In an interview with Zane Lowe on Beats 1, Scott told the video's backstory while in the middle of boarding a plane. After describing the process of filming the new video, Scott offered a preview of West's highly-anticipated Yeezus follow-up Swish. "Piss on Your Grave" has an intriguing, though confusing, backstory. Action Bronson - Actin Crazy. RARE! Young Notorious BIG Freestyle.

Tags. ▶ Mujeres & Mashups Tirando Bombas by Homegrown MX. PLOP RADIO. Prince Ea - BACKWARDS RAPPERS. Best Indie Rock Albums of All Time - Music. Inicio – Rdio. This song is sick. Category: Chill Posted in Chill, Premieres by Bryan | Tags: Deep House, Free Download, jackLNDN, Premiere I couldn't be more excited to deliver the latest side of the deep stuff from emerging UK producer JackLNDN who follows up his previous amazing original "Drop Out" as well as remixes of Clean Bandits "Rather Be" and Cordashian "Questions" with a brand new release.

Today we have "Play It Back" the first single off a brand new Summer Never Ends EP set to release soon. He's laid down a vibe filled deep-house foundation with some sexy live saxophone samples to come together for a blissful journey. We will be bringing you more info on the upcoming EP as it becomes available, but for now listen to the premiere below and grab an exclusive free download thanks to Jack.