Bonobo / Artist / Ninja Tune. Simon Green, AKA Bonobo, is an artist very much at the peak of his powers. 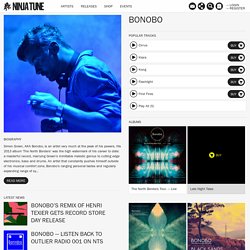 His 2013 album ‘The North Borders’ was the high watermark of his career to date: a masterful record, marrying Green's inimitable melodic genius to cutting edge electronics, bass and drums. An artist that constantly pushes himself outside of his musical comfort zone, Bonobo’s ranging personal tastes and regularly expanding range of synthesizers and instruments continue to take his productions to new levels. This outlook has earned him a reputation as one of the most pioneering figures in electronic music, in both his solo DJ sets and 12-piece live band shows. All this comes as the result of over ten years hard work, and five albums that have honed Green's skills. Barcelona Street Art - Graffiti. Graffiti Generator @ Calderdale Online. Streetwear, Skate Clothing, Footwear, Accessories - MOOSE Limited. 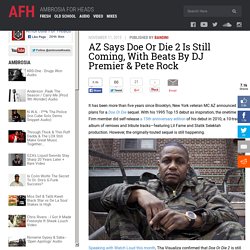 With his 1995 Top 15 debut as inspiration, the onetime Firm member did self-release a 15th anniversary edition of his debut in 2010, a 10-track album of remixes and tribute tracks—featuring Lil Fame and Statik Selektah production. However, the originally-touted sequel is still happening. Speaking with Watch Loud this month, Tha Visualiza confirmed that Doe Or Die 2 is still very much on the books. “Yo no estuve aquí”, Cortometraje Mexicano Experimental de Graffiti by Carlos Yamil. Is Damian Marley Illuminati? As a primarily reggae website, 18 Karat Reggae, catches a lot of flak whenever it discusses a topic having to do with Rap and/or Hip Hop. 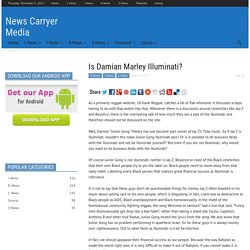 Whenever there is a discussion around celebrities like Jay-Z and Beyonce, there is the everlasting talk of how much they are a part of the Illuminati and therefore should not be discussed on the site. The SICKEST beatboxer in the world!!!!!!!! Kanye Vs. Jay Z: 2 Rappers, 2 Riders ... Who's The Bigger Diva? Kanye and Jay Z are arguably two of the most talented rappers in the game ... but they're also the neediest -- at least, according to the laundry list of their hotel concert demands. 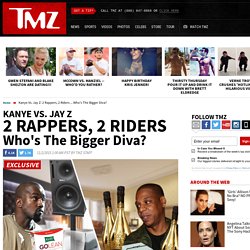 Freestylers humillados golpean a sus oponentes - Rap Battle Fails. Breakdance Cat Attack. 22 Examples Of The Most Gangsta Sh*t That Has Ever Happened. Cool Rap Battle Video. Viral Video Legends Compilation - 100 Greatest Internet Videos In 3 Minutes. Darrelle Revis Helped Him Get Popping - 25 Things You Didn't Know About Mac Miller. This feature is a part of Complex's "Man of Next Year" Week. 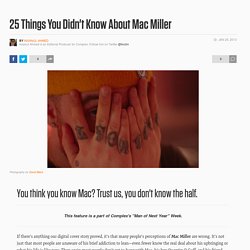 If there's anything our digital cover story proved, it's that many people's perceptions of Mac Miller are wrong. It's not just that most people are unaware of his brief addiction to lean—even fewer know the real deal about his upbringing or what his life is like now. Then again most people don't get to hang with Mac, his boy Quentin Q Cuff, and his friend Jimmy Murton to get the scoop on the Most Dope general. Although our Man of Next Year profile captured the real Malcolm James McCormick, there's still a ton of stuff that went unreported.

Article on Graffiti. Redman - Pancake & Syrup (Mixtape) Eminem Westwood Freestyle. He starts going off at about 2:15 [Eminem] Yo blast me off, Tim, blast me off, son Blastin’ off right now son I wasn’t born mean, I was pushed to treachery I walk the streets looking for some puss to fetch me I’m like a veggie, brain is turned to mush, I’m edgy Edgy enough to give Reggie Bush a wedgie If he don’t gimme Kim, things could get messy So pass that ass to me let me squish the left cheek And press against the right one till it’s smushed against me And leave a dead body in the woods, the MC With the Christopher Reeve beef, we started out on the wrong foot Or should I say fake leg made outta wood I shouldn’t, yes I should Riding through the hood, I’m chillin’ with Westwood I’m quite mellow, a white fellow My pee is bright yellow, I like Jello I’m like hello to a cute little dyke on the mic I’m kinda like [Mr. 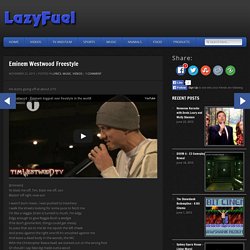 12 Things You Never Knew About Eminem. Mr. Invisible - Bring It On (Justin Aswell MPC Solo) Digital Graffiti Wall - Stencils Feature. Who is bigger diva, Jay Z or Kanye West? Find out here. Jay Z and Kanye West – YouTube screenshot Every music star has a rider list for things they want behind the scenes when they go on tour. 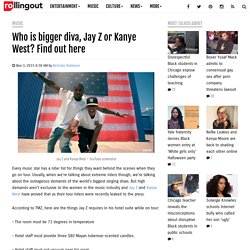 Usually, when we’re talking about extreme riders though, we’re talking about the outrageous demands of the world’s biggest singing divas. But high demands aren’t exclusive to the women in the music industry and Jay Z and Kanye West have proved that as their tour riders were recently leaked to the press. Music Archives. Ambrosiaforheads. October 13, 2015|Published By Bandini It has been almost five years since Redman released an album. 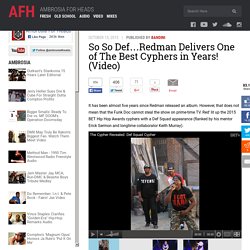 However, that does not mean that the Funk Doc cannot steal the show on prime-time TV. Red’ lit up the 2015 BET Hip Hop Awards cyphers with a Def Squad appearance (flanked by his mentor Erick Sermon and longtime collaborator Keith Murray). With EPMD turntablist/producer DJ Scratch behind them, the Def Squad finds themselves in “full cooperation” during the second cypher of the show. E-Double opens things up, kicking bars over an ageless Beanie Sigel beat about his longevity, a $1.7 million Def Jam Records contract in the ’90s, and hits in more than three decades.

Purple drank. A spoonful of promethazine/​codeine syrup showing the characteristic purple color Purple drank is a slang term for a concoction which includes a prescription-strength cough syrup as a recreational drug. 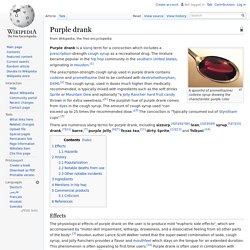 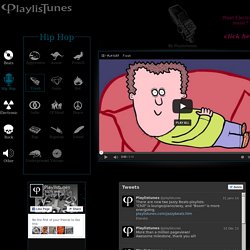 Kendrick Lamar & ScHoolboy Q - Spiteful Chant (Live) Ice Cube's Good Day Visualised. Website Under Maintenance. Dr. Dre - The Next Episode (San Holo Remix) feat. Marquese. Best Rap Lyrics - HipHopComeup. Hip Hop is filled with many great lyrics that leave you wondering how these rappers came up with them, but which ones are the best rap lyrics? I guess it’s hard to say because everyone can argue about what a good rap lyric should contain. This is true but I also believe that most people can recognize good lyrics when they hear them. The best rap lyrics should be clever and filled with rhymes that leave your ears tingling.

5,000 Free Loops ( Free Drum Loops & Producer Loops ) Here are over 3 gigabytes of free loops of drum samples, guitar loops, Dubstep loops, bass loops, Hip Hop loops, and many more free loops. Please share this post and follow us to show support. New free downloads added weekly. Get our free newsletter. P.S. Finally, the Hip Hop Kids Are Taking Acid. The Flatbush Zombies: Meechy Darko (left) and Zombie Juice (right). Photo by Conor Lamb. The Flatbush Zombies' whole crew is sleeping the day away when I enter their crash pad somewhere in Brooklyn. It’s the midafternoon and four dudes are still sprawled out over two oversized mismatched couches under a haze of last night’s stale reefer smoke. From hung-over murmurs, I gather that there are acid tabs in the refrigerator and treasure troves of sour diesel weed hidden like stinky Easter eggs all over the apartment. Zombie Juice and Meechy Darko, the MC duo that make up the Flatbush Zombies, are in the flophouse’s only bedroom.