Native vs Hybrid - Demystifying the Technology Dilemma. While working with many different clients - from start-ups to corporate businesses, I have learnt that choosing between a hybrid and a native app is very often not an easy task. 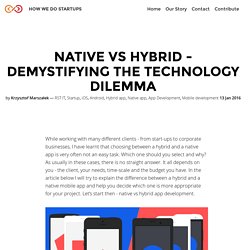 Which one should you select and why? As usually in these cases, there is no straight answer. It all depends on you - the client, your needs, time-scale and the budget you have. In the article below I will try to explain the difference between a hybrid and a native mobile app and help you decide which one is more appropriate for your project. Let’s start then - native vs hybrid app development. The Introduction First of all some stats: 79,4% of all mobile devices use Android 16,4% of all mobile devices use iOS Source - Forbes.com Therefore, those are the technologies I will focus on. Furthermore, as we explained in one of our previous articles mobile is already starting to dominate desktop. Hybrid vs Native Mobile Apps - The Answer is Clear. As you read this document, understand that user experience trumps everything else when it comes to mobile. 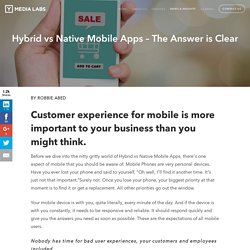 It’s a known fact that hybrid apps don’t perform as well as native apps, so if you’re going to choose a hybrid, make sure you’re aware that your users’ experiences will likely suffer. While there are a lot of advantages to using hybrid, customer experience for mobile should be a primary consideration. It can make or break the success of the app. Eight years after the release of the first iPhone we simply cannot imagine a world without smartphones and their companion mobile applications. Native, HTML5, or Hybrid: Understanding Your Mobile Application Development Options. Navigation: Developer Force | Salesforce Mobile Services | Native, HTML5 or Hybrid Screens are small, apps are big, and life as we know it is on its head again. 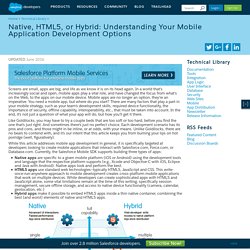 In a world that's increasingly social and open, mobile apps play a vital role, and have changed the focus from what's on the Web, to the apps on our mobile device. Mobile apps are no longer an option, they're an imperative. You need a mobile app, but where do you start? Hybrid vs Native Mobile App Development. Decide in 5 minutes! I’ve stumbled upon a lot of curious and confused entrepreneurs who go crazy trying to decide on how to approach their Mobile App. 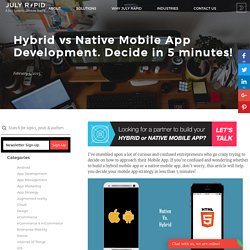 If you’re confused and wondering whether to build a hybrid mobile app or a native mobile app, don’t worry, this article will help you decide your mobile app strategy in less than 5 minutes! Quick one-liners on Hybrid Apps and Native Apps before we get started: Hybrid App: Developer augments web code with native SDK. Can be easily deployed across multiple platform and is usually the cheaper and faster solution Native App: This is platform (iOS, Android etc.) specific and requires unique expertise. 5 Questions to ask before you decide The answers to most of the questions that I have pointed here might be interrelated.

Do you want to use native features in the Mobile App? If your app is heavy on native phone capability and this is your primary USP, then native app development will work best. How quickly do you want to take it to the market? Applications natives, web ou hybrides : que choisir ? Quelles sont les différences entre ces trois types d’applications ? 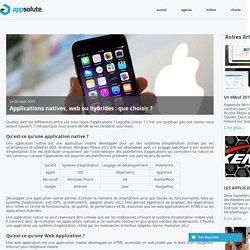 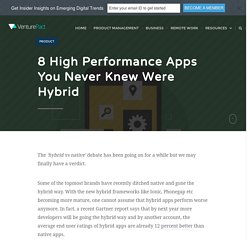 Some of the topmost brands have recently ditched native and gone the hybrid way. With the new hybrid frameworks like Ionic, Phonegap etc becoming more mature, one cannot assume that hybrid apps perform worse anymore. In fact, a recent Gartner report says that by next year more developers will be going the hybrid way and by another account, the average end user ratings of hybrid apps are already 12 percent better than native apps.

So where are all the hybrid apps? You use them a lot, probably without even realizing that you’re actually on “the web”. Here are 8 very popular hybrid apps that you could never have imagined to be, hybrid: Amazon Appstore For Ethan Evans, VP of the Amazon Appstore, the most compelling reason to incorporate HTML5 in the appstore was not interoperability, but agility to update the app without requiring an update. Evernote Twitter Apple App store Gmail Khan Academy Uber Instagram.