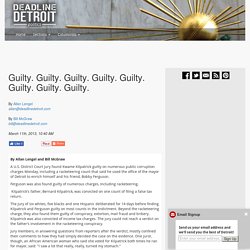 District Court jury found Kwame Kilpatrick guilty on numerous public corruption charges Monday, including a racketeering count that said he used the office of the mayor of Detroit to enrich himself and his friend, Bobby Ferguson. Ferguson was also found guilty of numerous charges, including racketeering. Kilpatrick's father, Bernard Kilpatrick, was convicted on one count of filing a false tax return. Detroit dire, but private groups, citizens keep the Motor City running. Detroit's fiscal condition has become so dire that private citizens are stepping up to provide basic services, and some experts say the volunteers and entrepreneurs are the Motor City's best hope. 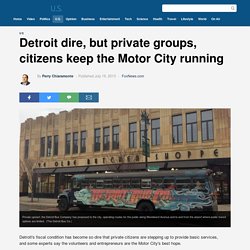 Nearly $2.5 billion in debt after decades of mismanagement, the city is now being run by an independent emergency manager in a last-ditch effort to avoid bankruptcy. Just last month that city stopped payment on unsecured debt in an attempt to “conserve cash” for the police and fire departments and other city services. But the city's collision course with insolvency has created business opportunities for some and spurred a sense of civic pride for others. “Bankrupt: How Cronyism and Corruption Brought Down Detroit”

By Todd Zywicki By Todd Zywicki February 10, 2014 A couple of weeks ago I attended the premiere of the new movie “Bankrupt: How Cronyism and Corruption Brought Down Detroit.” 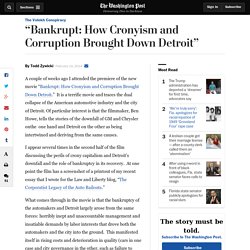 It is a terrific movie and traces the dual collapse of the American automotive industry and the city of Detroit. Of particular interest is that the filmmaker, Ben Howe, tells the stories of the downfall of GM and Chrysler onthe one hand and Detroit on the other as being intertwined and deriving from the same causes. I appear several times in the second half of the film discussing the perils of crony capitalism and Detroit’s downfall and the role of bankruptcy in its recovery. At one point the film has a screenshot of a printout of my recent essay that I wrote for the Law and Liberty blog, “The Corporatist Legacy of the Auto Bailouts.” How corrupt is Detroit? Last week the federal government announced that it would stop sending a $50 million annual grant to the Detroit Human Services Department due to nepotism, reckless spending and corruption. 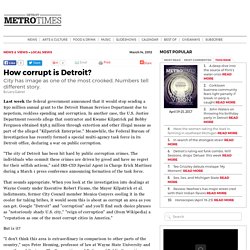 In another case, the U.S. Justice Department records allege that contractor and Kwame Kilpatrick pal Bobby Ferguson obtained $58.5 million through extortion and other illegal means as part of the alleged "Kilpatrick Enterprise. " Meanwhile, the Federal Bureau of Investigation has recently formed a special multi-agency task force in its Detroit office, declaring a war on public corruption. "The city of Detroit has been hit hard by public corruption crimes. The individuals who commit these crimes are driven by greed and have no regret for their selfish actions," said IRS-CID Special Agent in Charge Erick Martinez during a March 1 press conference announcing formation of the task force. How corruption deepened Detroit's crisis.