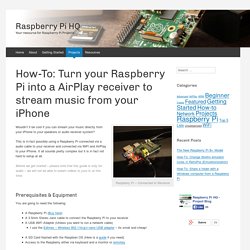 This is in-fact possible using a Raspberry Pi connected via a audio cable to your receiver and connected via WiFi and AirPlay to your iPhone. It all sounds pretty complex but it is in fact not hard to setup at all. Before we get started – please note that this guide is only for audio – we will not be able to steam videos to your tv at this time. Prerequisites & Equipment You are going to need the following: A Raspberry Pi (Buy here)A 3.5mm Stereo Jack cable to connect the Raspberry Pi to your receiverA USB WiFi Adapter (Unless you want to run a network cable) I use the Edimax – Wireless 802.11b/g/n nano USB adapter – its small and cheap!

If you need any help connecting your Raspberry Pi to your WiFi network you can use the guide here. Step 1 – Making sure the audio output work alsamixer Next we can test the output by running: . sudo make install. Raspberry Pi Customization: Shairport Raspberry pi. Raspbian: Shairport doesn't work. I was just trying to figure this out myself and found the solution after thumbing through what some ubuntu meta-packages include, which aren't necessarily in the raspbian repository. 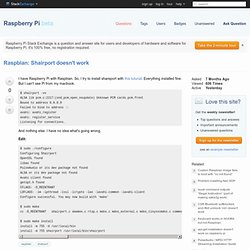 The package you want is libasound2-dev. Install it first: sudo apt-get install libasound2-dev Then, run . /configure and you'll notice ALSA is detected. pi@raspberrypi ~/shairport $ . If you'd also like PulseAudio support for shairport, install libpulse-dev, then rerun . sudo apt-get install libpulse-dev Afterwards, make and sudo make install and you're good to go. For reference, the complete apt-get list of packages to install for all capabilities prior to installing shairport is: Pitft-28-inch-resistive-touchscreen-display-raspberry-pi. Installing OS. Once you have received your Raspberry Pi and unpacked the mini-computer it is time to fire it up and see what its all about. 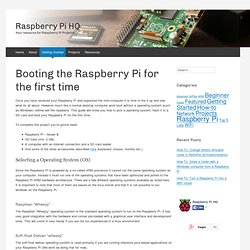 However much like a normal desktop computer wont boot without a operating system (such as Windows) neither will the raspberry. This guide will show you how to pick a operating system, flash it to a SD card and boot your Raspberry Pi for the first time. To complete this project you’re gonna need: Raspberry Pi – Model BSD Card (min. 2 GB)A computer with an internet connection and a SD card readerAnd some of the other accessories described here (keyboard, mouse, monitor etc.)