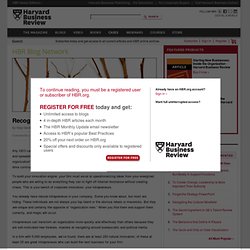 The real issue is selecting and spreading the best ideas, testing quickly, and executing flawlessly. An “innovation engine” is an organization’s capability to think and invest in long-term opportunities along with the competence to drive continuous innovations for top-line growth each year. To build your innovation engine, your firm must excel at operationalizing ideas from your energized people who are willing to do everything they can to fight off internal resistance without creating chaos.

Articles/unlocking-the-passion-of-the-explorer/.Uj8ep04Deug.twitter. Www.rotman.utoronto.ca/-/media/Files/Programs-and-Areas/behavioural-economics/Nudging Around The World_Sep2013.pdf. The Highest-Performing Operation in Government - Fedblog - News - GovExec.com. Some years ago, I wrote a rather churlish column for Government Executive on my experiences with the State Department's passport processing operation. 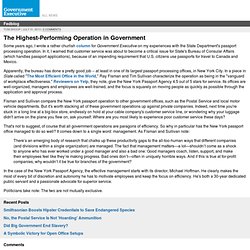 In it, I warned that customer service was about to become a critical issue for State's Bureau of Consular Affairs (which handles passport applications), because of an impending requirement that U.S. citizens use passports for travel to Canada and Mexico. Apparently, the bureau has done a pretty good job -- at least in one of its largest passport processing offices, in New York City. Cpd.org.au/wp-content/uploads/2013/08/CPD_OP30_Death-by-1000-cuts.pdf?utm_source=buffer&utm_campaign=Buffer&utm_content=buffer6e819&utm_medium=twitter. How the Best Places to Work are Nailing Employee Engagement. Public Policies, Made to Fit People. A Lot of Civic Leaders Need to Listen to This Painfully Obvious Advice - Sommer Mathis. In their new book, The Metropolitan Revolution, Bruce Katz and Jennifer Bradley of the Brookings Institution's Metropolitan Policy Program make the case that real power in the U.S. is shifting from the federal government to cities and metropolitan areas. 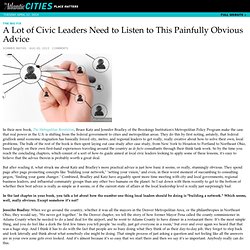 They do this by first noting, astutely, that federal gridlock amid economic stagnation has basically forced city, metro, and regional leaders to get really, really creative about how to solve their own, local problems. The bulk of the rest of the book is then spent laying out case study after case study, from New York to Houston to Portland to Northeast Ohio, based largely on their own first-hand experiences traveling around the country as de facto consultants through their think tank work. So by the time you reach the concluding chapters, which consist of a sort of how-to guide aimed at local civic leaders looking to apply some of these lessons, it's easy to believe that the advice therein is probably worth a great deal. Gallup's Workplace Jedi On How To Fix Our Employee Engagement Problem. The way we lead people in America is failing. 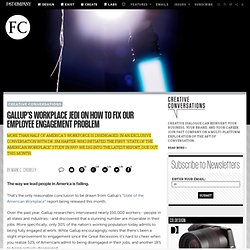 That’s the only reasonable conclusion to be drawn from Gallup’s “State of the American Workplace” report being released this month. Over the past year, Gallup researchers interviewed nearly 150,000 workers--people in all states and industries--and discovered that a stunning number are miserable in their jobs. Why is Medicare shutting down one of the most effective health-care experiments in the country? — Health.

When Ken Coburn has visitors to the cramped offices of Health Quality Partners in Doylestown, Pa., he likes to show them a graph. 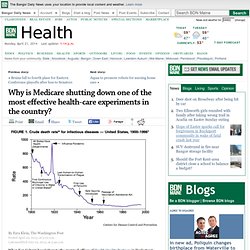 Three Reasons Performance Management will Change in 2013. What If Everything Ran Like the Internet? When the Internet was first starting to catch on in the 1980s, I was invited, as a representative of a large business consulting organization, to a day-long seminar explaining what this new phenomenon was and how businesses should be responding to it. 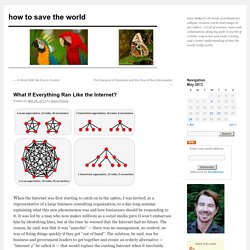 It was led by a man who now makes millions as a social media guru (I won’t embarrass him by identifying him), but at the time he warned that the Internet had no future. The reason, he said, was that it was “anarchic” — there was no management, no control, no way of fixing things quickly if they got “out of hand”. The solution, he said, was for business and government leaders to get together and create an orderly alternative — “Internet 2” he called it — that would replace the existing Internet when it inevitably imploded. Of course, he couldn’t have been more wrong. The Internet represents a different way of ‘organizing’ (though that word doesn’t quite fit) a huge system. 5 reasons introverts make great community managers.

The Ripple Effects You Create as a Manager - Monique Valcour. By Monique Valcour | 8:00 AM May 7, 2013 Each one of us holds a set of beliefs and attitudes — a mindset — that determines how we interpret and respond to situations. 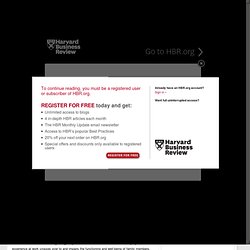 That mindset shapes how we interact with others, and therefore it also affects the people we work with — in ways both subtle and profound.