Welcome to the K-12 Game-a-thon. ​How Game-Based Learning Encourages Growth Mindset. In the gaming world, perseverance, problem solving, and creativity are the keys to success. 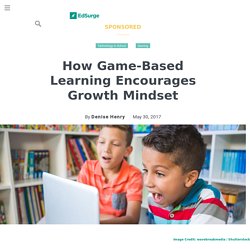 Gamification: How to Use Game-Based Learning in the Classroom. Video game developers have become very effective over the years at getting players addicted to their products, much like gambling gets its hooks into people. 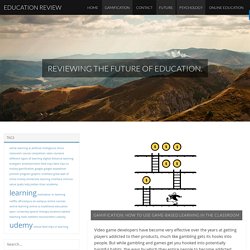 But while gambling and games get you hooked into potentially harmful habits, the ways by which they entice people to become addicted have the possibility to be extremely helpful in a positive and productive way when used in the right setting and with the right purpose. In the following article, we’ll explore how games are able to be so addictive, how gamifying learning can be effective for teaching, and how you can use reward based systems in the classroom. Games use a reward feedback system to encourage continual play. A sense of progress and growth keeps people coming back because they feel good when they accomplish something. How Games Can Hook Students With Short Attention Spans - The Tech Edvocate.

Gamifying Your Class to Meet the Needs of All Learners. Playing games is fun. Some people pour hours into games without complaint, whether it’s shooting 200 free throws or completing a guild raid in World of Warcraft over several hours. You can tap into that kind of engagement through gamification—applying game elements to non-game environments to encourage higher participation and motivation. A simple example is a hotel chain, airline, or credit card reward system, where points earned offer customers perks like free rooms, flights, or upgrades, or other amenities. What if you could do something similar in a learning curriculum? What if each student could choose to do additional skill tasks, readings, and experiments? 1. Create a leveling chart that shows students the amount of experience points needed for each level.

Do not include experience points as part of students’ course grade—doing so can inflate grades. How Digital Games Have Changed the Shape of Learning. A Seven-Part Series | Part Seven Learning is most often viewed as a linear process. 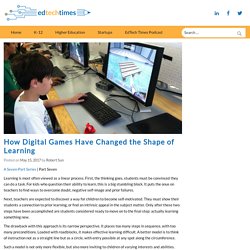 First, the thinking goes, students must be convinced they can do a task. For kids who question their ability to learn, this is a big stumbling block. It puts the onus on teachers to find ways to overcome doubt, negative self-image and prior failures. Next, teachers are expected to discover a way for children to become self-motivated.

Hacking Children's Learning: Why Gamification Technology Has The Answer. Game Thinking For Learning And Development: Are We Asking The Right Questions? - eLearning Industry. Gamify your classroom with Google Forms. Games or Worksheets: Is there really a question about the choice? I work part time with gifted elementary students at two Title 1 schools where most of the students qualify for free or reduced lunches; and where they and/or their parents are learning English as a second language. 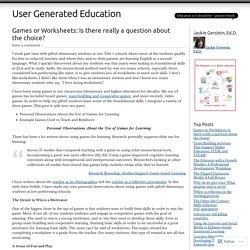 What I quickly discovered about my students was that many were lacking in foundational skills in ELA and in math. Sadly, the instructional method used by way too many schools, especially those considered low performing like mine, is to give students lots of worksheets to teach such skills. I don’t like worksheets. Edutopia. Video games can engage players with more than just action.

Impactful games are about serious topics and can create conditions for deeper learning. Like a good novel or cinematic experience, these types of games often have a strong narrative thread, appropriate for English Language Arts (ELA) classrooms. Consider having students play one of the games below, and then, to measure learning outcomes, use traditional assessment strategies like matching claims to evidence. 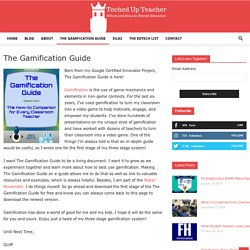 5 Ways To Create Simulation Games: The ITyStudio Case - ITyStudio. Even with new technologies, creating simulation games can remain a hustle sometimes: Between costs, technical skills required, and ROI expected, we do not always reach the expected results. 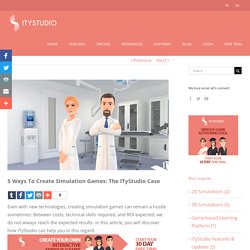 4 Ways That Gamification Can Change Your Life. One commonality that binds us all is our endless pursuit of happiness. 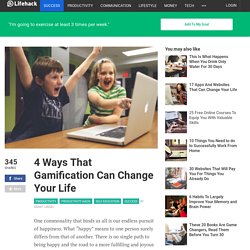 What Video Games Like Doom Teach Us About Learning, According to GBL Guru James Paul Gee. James Paul Gee is living many a teenager’s dream. (Or mine, at least.) The Mary Lou Fulton Presidential Professor of Literacy Studies at Arizona State University has been playing video games for four hours every day since 2003, solving puzzles and battling bosses in games such as Doom, Darksiders 2 and Uncharted 4. 8 Principles Of Gamified Learning - 8 Principles Of Gamified Learning by Jonathan Cassie As our society continues to evolve in response to the rapid changes brought on by universally accessible mass technology, the act of teaching (and the experience of learning) has been under significant pressure to adapt. 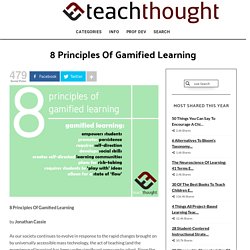 Since the turn of the century, a number of approaches have been offered by scholars and practitioners to answer this challenge. One of them that I feel strongly is an essential part of the educator’s toolbox is gamified instruction. Simply put, Industrial-age instructional techniques leave many Information-age students in the dust. In my book, Level Up Your Classroom, I develop eight research-informed principles that support gamified instruction as an approach to teaching and learning. 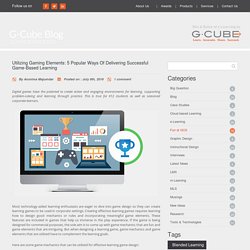 This is true for K12 students as well as seasoned corporate learners. Most technology-aided learning enthusiasts are eager to dive into game design so they can create learning games to be used in corporate settings. Creating effective learning games requires learning how to design good mechanics or rules and incorporating meaningful game elements. These features are included in games that help us immerse in the play experience. If the game is being designed for commercial purposes, the sole aim is to come up with game mechanics that are fun and game elements that are intriguing. 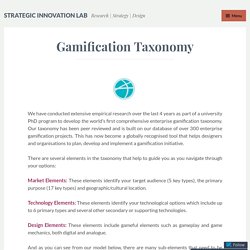 Our taxonomy has been peer reviewed and is built on our database of over 300 enterprise gamification projects. This has now become a globally recognised tool that helps designers and organisations to plan, develop and implement a gamification initiative. There are several elements in the taxonomy that help to guide you as you navigate through your options: Market Elements: These elements identify your target audience (5 key types), the primary purpose (17 key types) and geographic/cultural location.

Technology Elements: These elements identify your technological options which include up to 6 primary types and several other secondary or supporting technologies. Design Elements: These elements include gameful elements such as gameplay and game mechanics, both digital and analogue. Math. Science. Recess. Minecraft? Twitch club brings gaming to school. Seventh-grader Brayden Foxhoven hurries to finish his chicken fingers.

He has bases to capture. Gems to collect. Viewers to entertain. And he knows better than to break the cardinal rule of playing video games at middle school: Don’t spill your lunch on the keyboard. Foxhoven and his Viewpoint School classmates are getting an education in Twitch, the app that lets anyone stream their game play for the world to watch. This school year, the private school in Calabasas formed a Twitch club -- a weekly gathering that has quickly become as popular as established clubs for Spanish speakers and “Harry Potter” fanatics. Where students who toiled on computers during lunch were once the audiovisual club nerds, Foxhoven and his dark blue Twitch hoodie are among the cool on campus.

Why Curriculum Should Function More Like A Game. In 2013, sandbox video games have changed gaming more than a little. Players can now define their own terms for success, and the evolution of certain gamification elements makes this more than a fantasy in the minds of the players. 11 Lessons About Game-based Learning and STEM Education. MIND's third annual K-12 Game-a-thon is now well underway, challenging students from across the country to design, build and share their own math games. Edutopia. Child psychologist Lev Vygotsky famously wrote, "In play, a child always behaves beyond his average age, above his daily behavior. In play, it is as though he were a head taller than himself. " Cities: Skylines Versus Real-Life Urban Planning. Like most city lovers of a certain age, I spent many hours as a kid playing SimCity.

For readers who are tragically uninitiated, SimCity is one of the iconic computer games of the 1990s, though new versions have been released as recently as 2013. Playing as mayor (or, really, dictator, but more on that later), you shepherded the growth of a city from its very first streets to towering skyscrapers—assuming you weren’t wiped out by tornados, fires, or aliens. By making thousands and thousands of people plan commercial, industrial, and residential districts for their virtual towns, the creators of SimCity have probably done more than anyone in the history of the world to introduce basic principles of zoning to the public.

What’s More Effective: Gamification or Game-based Learning? The world of learning and development is changing dramatically and at long last, learning managers are discovering where the real key to success lies. Classroom Gaming: What It Isn't, What It Is, and How to Do It Right. In his TED Talk exactly six years ago, American video game designer Jesse Schell predicted a future in which games would rule everyday life. The government would hand out experience points—aka tax relief—for making “right” decisions, such as paying off your credit card bill or saving more in your retirement fund. A Third Grader’s Plea For More Game-Based Learning.