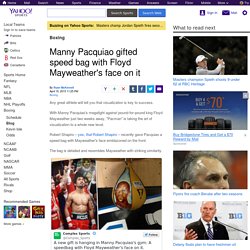 With Manny Pacquiao's megafight against pound-for-pound king Floyd Mayweather just two weeks away, "Pacman" is taking the art of visualization to a whole new level. Robert Shapiro – yes, that Robert Shapiro – recently gave Pacquiao a speed bag with Mayweather's face emblazoned on the front. The bag is detailed and resembles Mayweather with striking similarity. No word on where Shapiro got the bag, or who made it, but it is hanging inside Freddie Roach's Wild Card Gym in Hollywood. The gift was on display for Wednesday's media day as Pacquiao continues preparing for the May 2 showdown in Las Vegas. Shapiro or Team Pacquiao should look into mass-producing that. Sports & RecreationBoxingManny PacquiaoFloyd Mayweather. San Diego Chargers tight end Antonio Gates doubles as boxing promoter.

The Promoter: Antonio Gates sits ringside Veteran Chargers tight end Antonio Gates takes his knowledge of the professional sports grind back to his Detroit home and into a second career as a boxing promoter. 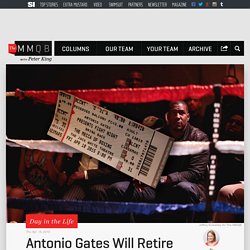 DETROIT — Last Friday was fight night in the Motor City, and the crowd of nearly 500 rumbled alive nine minutes past midnight as Ronnie “Teflon Ron” Austion sauntered into the dimly lit arena. A 20-year-old welterweight and hometown favorite, Teflon Ron wore a red satin cape trimmed with white fur—a flair he dreamed up around Christmastime—and strode down the aisle flanked by a 17-member entourage that included a teenager rapping on a wireless microphone and a few children who got caught up in the whirlwind. “I don’t even know who half those people were,” he’d later say. • Also on The MMQB: After a turbulent final act with the Jets, Rex Ryan is starting fresh in Buffalo After eight rounds, Ronnie Austion (l.) won an unanimous decision over Dedrick Bell of Memphis. “How you feeling?” Manny Pacquiao and Floyd Mayweather show off their ripped bodies. Conor McGregor: I would beat Floyd Mayweather in less than 30 seconds.

You can say a lot of things about boxing’s pound-for-pound king Floyd Mayweather. 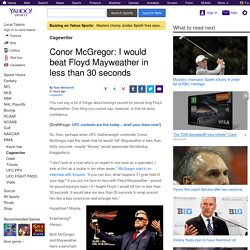 One thing you cannot say, however, is that he lacks confidence. [DraftKings: UFC contests are live today – draft your team now!] So, then, perhaps when UFC featherweight contender Conor McGregor said this week that he would “kill” Mayweather in less than thirty seconds, maybe “Money” would appreciate the blinding braggadocio. “I don’t look at a man who’s an expert in one area as a specialist. Floyd Mayweather, Manny Pacquiao weigh-in tickets will cost $10 each. Dan Rafael, Boxing Close2013 BWAA Nat Fleischer Award winner for excellence in boxing journalism ESPN.com boxing writer since 2005 Five years at USA Today One of the most anticipated moments of any fight week is the weigh-in, especially in Las Vegas, where fans often jam the MGM Grand Garden Arena to cheer, chant and get a look at the boxers in one more faceoff the day before they fight. 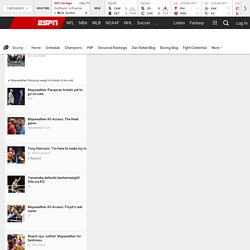 In recent years, weigh-ins for fights involving Floyd Mayweather and Manny Pacquiao have been nearly as electric as the arena on some fight nights. And the beauty of it for fight fans is that by state law in Nevada, weigh-ins are free public events in the same category as a Nevada State Athletic Commission meeting.

"All of the money that is generated from the weigh-in, every dollar, is going to charity," Brad Jacobs, the executive event producer for Top Rank, Pacquiao's promoter, told ESPN.com on Thursday. Jacobs said the reason for the nominal charge is to help with crowd control. The Logistics Behind Mayweather and Pacquiao’s 60-40 Split. Photo LOS ANGELES — No matter who wins the richest boxing match in history on May 2, will receive part of his payday the next business day from his promoter, Bob Arum. 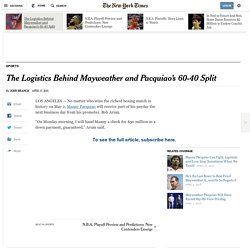 “On Monday morning, I will hand Manny a check for $50 million as a down payment, guaranteed,” Arum said. It is a bit more complicated than that — it is a wire transfer, actually, and 30 percent of it will be shaved off for the Internal Revenue Service, Arum said. But the bottom line is that the long-anticipated championship welterweight match between Pacquiao and will earn hundreds of millions of dollars, mostly for the fighters.

Mayweather will receive a substantial portion of his earnings immediately after the fight, said Leonard Ellerbe, chief executive of Mayweather Promotions. “I will tell you this,” Ellerbe said. The contract calls for Mayweather to receive 60 percent of the revenues. “We’re both bigger names than we were five, six years ago,” Mayweather said at his gym in Las Vegas on Tuesday.