Intel Launches New CPU for Ultra-Thin Laptops. Intel has just announced a new line of processors dedicated to the ultra-thin market. This consists in 6 processors (CPUs) from low-end with the Celeron U3400 to the high-end Core i7-660UM. Because all these processors are ultra-low voltage, or ULV as Intel call it. According to Intel, All processors and accompanying chips (graphics, IO…) should be capable of handling media, even the low-end ones. The Core ix Series still feature Turbo Boost, Intel’s automatic overclocking capabilities that increases the frequency of the CPU when needed. Overall, Intel announces performance improvements between 35% and 100% over previous CPUs for ultra-thin computers (depending on the task). Can Intel prime the ultra-thin laptop pump? Intel's move to extend its Core processor family more into ultra-thin laptops is likely to bring more of those devices to market at lower prices. 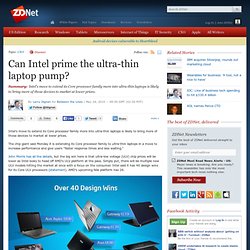 The chip giant said Monday it is extending its Core processor family to ultra-thin laptops in a move to increase performance and give users "faster response times and less waiting. " John Morris has all the details, but the big win here is that ultra-low voltage (ULV) chip prices will be lower as Intel looks to head off AMD's ULV platform at the pass. Simply put, there will be multiple new ULV models hitting the market at once with a focus on the consumer. Intel said it has 40 design wins for its Core ULV processors (statement). AMD's upcoming Nile platform has 26. 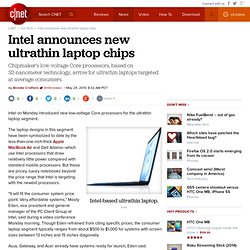 The laptop designs in this segment have been symbolized to date by the less-than-one-inch-thick Apple MacBook Air and Dell Adamo--which use Intel processors that draw relatively little power compared with standard mobile processors. But those are pricey, luxury notebooks beyond the price range that Intel is targeting with the newest processors. "It will fit the consumer system price point. Very affordable systems," Mooly Eden, vice president and general manager of the PC Client Group at Intel, said during a video conference Monday morning. Though Eden refrained from citing specific prices, the consumer laptop segment typically ranges from about $500 to $1,000 for systems with screen sizes between 13 inches and 15 inches diagonally. 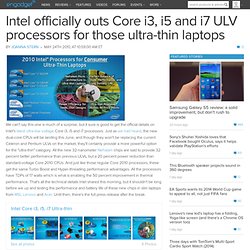