How to Use Confidence to Book the Role. 4 Practical On-Camera Tips That Make Directors Want To Hire You. By Brian O'Neil | Posted July 17, 2013, 2 p.m. 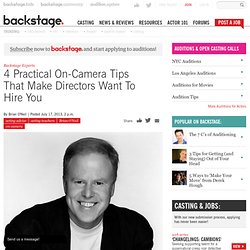 Besides the obvious traits of professionalism—such as personal deportment, promptness, cooperation, taking direction well—here are practical and technical on-camera tips to help make you a real pro on the set. 5 Tips for Nailing Your Self-Submission. Photo Source: Steve Weigl Right now, I’m covering a high-end Internet project where the initial round of auditions involves actors putting themselves on tape. 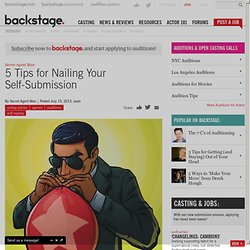 Once that phase is done, casting will review the submissions and decide who gets to come in and meet the producers face to face.I cringed when the casting director explained this to me. My first impulse was to call her lazy. After all, it’s her job to read actors in person. That allows her to give notes and direction that could make a huge difference in the performance. 5 Traps To Avoid When Submitting Video Auditions. By Brad Holbrook | Posted April 24, 2013, 3 p.m. 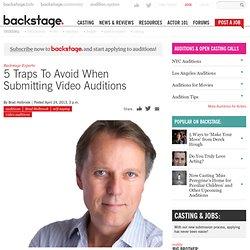 Actors have been “putting themselves on tape” for years. Born out of necessity when a casting office couldn’t get a known actor in house to see the producers, grainy, hollow-sounding video could still be procured and overnighted on a disk. 7 Elements Of A Great Monologue. For ten years as an agent and personal manager, I watched monologues – hundreds, maybe even thousands of them. 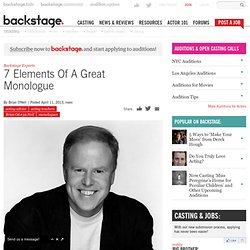 For the past fifteen years, I’ve been coaching monologues. Much of my coaching is based on what I discovered worked for actors and what did not. Certainly there are no rules, but there are some reasonable guidelines. Although my work includes coaching monologues for all kinds of situations, for our purposes today, I’m going to talk about the nature of the material that shows your personality. 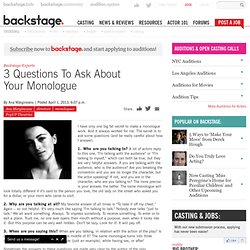 I have only one big fat secret to make a monologue work. And it always worked for me. The secret is to ask some questions (and be really careful about how I answer). Why Your Shoes Are Important In an Audition. By Marci Liroff | Posted April 4, 2013, 4 p.m. 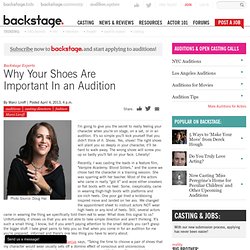 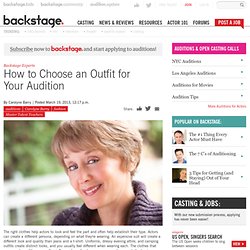 The right clothes help actors to look and feel the part and often help establish their type. Actors can create a different persona, depending on what they're wearing. An expensive suit will create a different look and quality than jeans and a t-shirt. Uniforms, dressy evening attire, and camping outfits create distinct looks, and you usually feel different when wearing each.

The clothes that you wear to auditions can often influence how directors, agency executives, and clients view you, and they can also be a subliminal callback and booking factor. The Top 5 Mistakes Actors Make In Auditions. Don’t Get Placed in the ‘Why?’ Pile. By Craig Wallace | Posted March 18, 2013, 5 p.m. 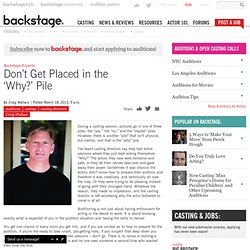 During a casting session, pictures go in one of three piles: the “yes,” the “no,” and the “maybe” piles. However, there is another “pile” that isn’t physical, but mental, and that is the “why” pile. I’ve heard casting directors say they had entire sessions where they just kept asking themselves “Why?” The actors they saw were tentative and safe, or they let their nerves take over and gave away their power. Sometimes it was obvious the actors didn’t know how to prepare their audition and therefore it was creatively and technically all over the map. Auditioning is not just about having enthusiasm for acting or the desire to work. 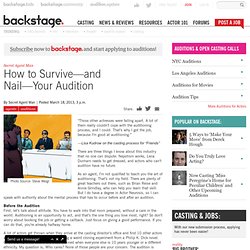 Photo Source: Steve Weigl “Those other actresses were falling apart. A lot of them really couldn’t cope with the auditioning process, and I could. That’s why I got the job, because I’m good at auditioning.” —Lisa Kudrow on the casting process for “Friends” There are three things I know about this industry that no one can dispute: Nepotism works, Lena Dunham needs to get dressed, and actors who can’t audition have no future. 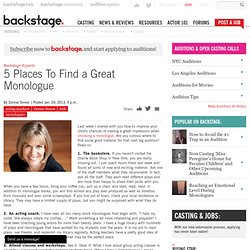 Last week I shared with you how to improve your child’s chances of making a great impression when choosing a monologue. Are you curious where to find some good material for that next big audition? Read on. 1. 3 Ways to Find Original Monologues. By Sean Kane | Posted Oct. 30, 2012, 10:37 a.m. Photo Source: Gotta Kid To Feed Productions One of the hardest parts of sending out audition materials is making yourself stand out amidst the sea of resumes, headshots, and reels. Often, it doesn't matter how inspired your performance is; if your materials don't stand out, they'll get lost in a stack of papers and DVDs. How to Handle a Casting Director’s Bad Line Readings. By Michael Kostroff | Posted Feb. 22, 2013, 11:09 a.m. Photo Source: Thomas Pitilli A few weeks ago, I answered a letter from “Partner Problems,” who’d been paired up at an audition with a completely unprepared actor who couldn’t even deliver the lines.

My suggestion that such an extreme case would justify an insistence on reading with a different actor prompted many worthy responses, some in agreement and some in disagreement. One poster posed a secondary question: What if you’re reading with the casting director, rather than another actor, and his or her reading is terrible? 8 Tips For Submitting Video Auditions. By Jackie Reid | Posted Feb. 22, 2013, 12:02 p.m.

We are deep in the middle of pilot season! Many of you who do not live in Los Angeles are getting notices to submit video auditions. This allows casting directors in Los Angeles and other major markets to initially audition you without you having to travel anywhere. 9 Elements That Make a Great Monologue. By Gwyn Gilliss | Posted Feb. 19, 2013, 12:11 p.m. Actors audition for a new play with a “script," for a new series with a “side,” and for a new commercial with “copy.” Sometimes if the script isn’t finished or the director requests it they’ll do an improv for a role in a new film as did Daniel Day Lewis and Sally Field for their roles in “Lincoln.

" How To Slate For The Best First Impression. 2 Callback Traps To Avoid. How to Survive Your First Cold Read. 8 Ways To Survive the Dreaded Waiting Room. The Color You Should Wear for On-Camera Auditions. You Never Know Where An Audition Will Lead. How to Handle an Unprofessional Scene Partner During an Audition. Look Inward, Not Outward, in Auditions. Why 'Acting Naturally' May Land You the Role.

Why Not To Get Attached to Audition Outcomes. Make Choices in the Audition Room. 6 Steps To Putting Yourself On Tape. 26 Reasons Why You Didn’t Get The Part. Give Yourself Permission To Be Present in Auditions. Don’t Show Your Underwear At An Audition. How To Transition From Stage Auditions to On-Camera Auditions. How To Keep Your Balance in the Audition Room. 12 Steps to Success When Auditioning for Commercials. 6 Real Auditions Gone Horribly Wrong. 4 Hot Tips For Being Off-Book. How To Audition Internationally. Why Auditioning Is Not Acting.

3 Common Audition Attitudes and How To Change Them. Why the Audition Is the Job. 6 Tips for a Successful Self-Taped Audition. 10 Things You Wish The Casting Director Had Told You Sooner. How to Ace an Audition.