Facebook. So You're Tired of Hearing About "Rape Culture"? - 26 years after Polytechnique massacre left 14 women dead, a survivor remembers. A memorial set up in Vancouver consisting of several hundred pairs of shoes in memory of all missing and murdered women in Canada, is displayed annually on the anniversary of the Montreal Ecole Polytechnique massacre that took place in 1989. 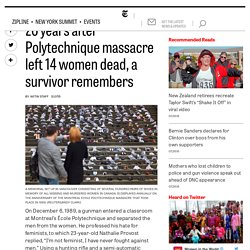 (REUTERS/Andy Clark) On December 6, 1989, a gunman entered a classroom at Montreal’s École Polytechnique and separated the men from the women. He professed his hate for feminists, to which 23-year-old Nathalie Provost replied, “I’m not feminist, I have never fought against men.” Using a hunting rifle and a semi-automatic carbine, he still shot her and the others with her before moving to the college cafeteria and another classroom, targeting women in his path.

Twenty-seven people were shot and 14 women were left dead, as was the gunman, who killed himself. Provost, who was shot four times, survived after nine days in the hospital. What can the church do about domestic violence? Linah Keza, left, pictured with Vicky Walker. 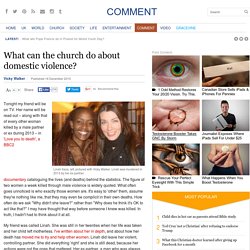 Linah was murdered in 2013 by her ex-partner. Tonight my friend will be on TV. Her name will be read out – along with that of every other woman killed by a male partner or ex during 2013 – in 'Love you to death', a BBC2 documentary cataloguing the lives (and deaths) behind the statistics. The figure of two women a week killed through male violence is widely quoted. Lisa Wilkinson delivers impassioned speech at Allison Baden-Clay rally calling for domestic violence reform. December 18, 2015: Lisa Wilkinson has read out a touching tribute to Allison Baden-Clay, showing her support for more to be done to stop violence against women. 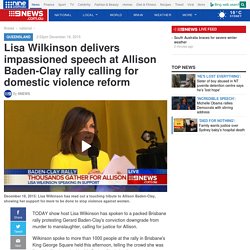 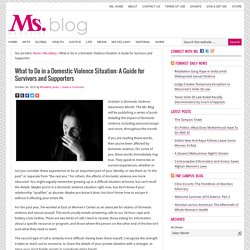 The Ms. Blog will be publishing a series of posts detailing the impact of domestic violence, including personal essays and more, throughout the month. If you are reading these words, then you’ve been affected by domestic violence. For some of you, these words immediately ring true. Charlie Pickering wants to talk about our priorities. I want to have a chat about priorities. 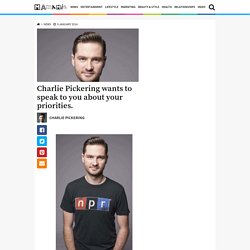 While most Australians have been on holiday over summer, I’ve been working. I worked Christmas Eve, Christmas Day, New Years Eve, New Years Day, the whole Megillah. So for the last four weeks I’ve been consuming more news than most people would recommend. And over that time I’ve noticed something about what we pay attention to and how we respond. How Gaslighting Is Abuse That Stays with You Like a Terrifying Hurricane. 34 Things Women Do To Stay Safe Show The Burden Of 'Being Careful' “But it is the men who are attacking the women. 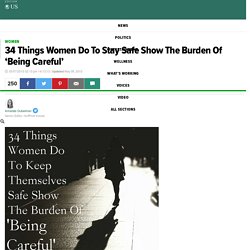 If there is to be a curfew, let the men stay at home.” So responded Israeli Prime Minister Golda Meier to a 1950s suggestion that fewer women would be assaulted if all were asked to stay inside. While few would suggest confining women to their homes after dusk in 2015, the burden placed on women to protect themselves from potential harm is nonetheless heavy still. Nocookies. Facebook App: Open links in External Browser There is a specific issue with the Facebook in-app browser intermittently making requests to websites without cookies that had previously been set.

This appears to be a defect in the browser which should be addressed soon. The simplest approach to avoid this problem is to continue to use the Facebook app but not use the in-app browser. This can be done through the following steps: Open the settings menu by clicking the hamburger menu in the top rightChoose “App Settings” from the menuTurn on the option “Links Open Externally” (This will use the device’s default browser) Windows Enabling Cookies in Internet Explorer 9 Open the Internet BrowserClick Tools (or “gear” icon at top right hand corner) > Internet Options > Privacy > AdvancedCheck Override automatic cookie handlingFor First-party Cookies and Third-party Cookies click AcceptClick OK and OK Enabling Cookies in Internet Explorer 10, 11 Enabling Cookies in Firefox. 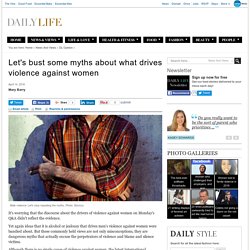 Photo: Stocksy It's worrying that the discourse about the drivers of violence against women on Monday's Q&A didn't reflect the evidence. Yet again ideas that it is alcohol or jealousy that drives men's violence against women were bandied about. But these commonly held views are not only misconceptions, they are dangerous myths that actually excuse the perpetrators of violence and blame and silence victims. Although there is no single cause of violence against women, the latest international evidence shows there are certain factors that consistently predict - or drive - higher levels of such violence.

These include beliefs and behaviours reflecting disrespect for women, low support for gender equality, and adherence to rigid or stereotypical gender roles, relations and identities. Advertisement Misrepresenting the drivers of violence against women not only ignores the evidence, it can be dangerous. Respectful relationships curriculum aims to change a generation. The Danger of the Monster Myth. Tom Meagher One of the most disturbing moments of the past eighteen months of my life was hearing my wife’s killer form a coherent sentence in court. 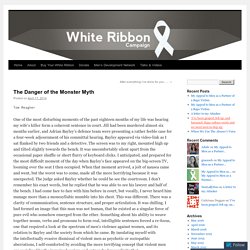 Jill had been murdered almost six months earlier, and Adrian Bayley’s defence team were presenting a rather feeble case for a four-week adjournment of his committal hearing. Bayley appeared via video-link as I sat flanked by two friends and a detective. College Acceptance Letters Get Seriously Dark, Beginning With One in the Harvard Crimson. The college acceptance letter, that iconic feel-good document that every university-bound student cherishes, gets a disturbing makeover in a campaign from Goodby Silverstein & Partners and production company Prettybird that broke Saturday with a print ad in the Harvard Crimson. 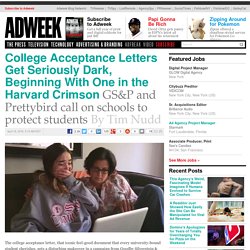 The point of the campaign is to raise awareness of sexual assault on campus, and pressure schools to protect students better. The creative approach: Mock up an acceptance letter that takes a dark turn halfway through, in which the admissions director apologizes in advance for the accepted student eventually getting raped on campus—and for not doing enough to protect her. RayRaf - Magician Convinces Woman To Believe They... Boys Will Be the Boys We Teach Them to Be. Editor’s note: This is the second in a four-part series about teens, sex, and social media. 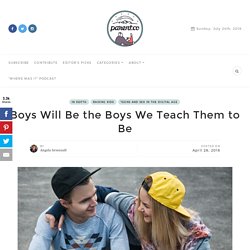 The first post is here. CBC News - Journal. Wondering why we need Rekiah's Law? Here's why. Domestic violence victim Rekiah O’Donnell was killed by her partner. But Rekiah’s family believe the perpetrator “got away with murder” because of a troubling legal loophole. Warning: this item deals with domestic violence and may be distressing for some readers.