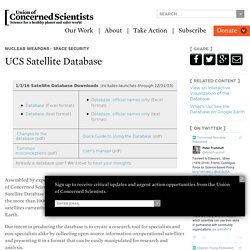 Our intent in producing the database is to create a research tool for specialists and non-specialists alike by collecting open-source information on operational satellites and presenting it in a format that can be easily manipulated for research and analysis. It is available as both a downloadable Excel file and in a tab-delimited text format. A version is also provided in which the "Name" column contains only the official name of the satellite in the case of government and military satellites, and the most commonly used name in the case of commercial and civil satellites. 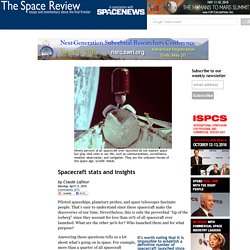 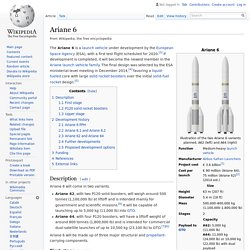 Ariane 62, with two P120 solid boosters, will weigh around 500 tonnes (1,100,000 lb) at liftoff and is intended mainly for government and scientific missions.[6] It will be capable of launching up to 5,000 kg (11,000 lb) into GTO.Ariane 64, with four P120 boosters, will have a liftoff weight of around 800 tonnes (1,800,000 lb) and is intended for commercial dual-satellite launches of up to 10,500 kg (23,100 lb) to GTO.[7][6] Ariane 6 will be made up of three major structural and propellant-carrying components. First stage[edit] P120 solid rocket boosters[edit] Delta II. The Industry Workhorse Since its introduction in 1989, Delta II has become the industry standard for reliability, on-time delivery of payloads to orbit, and customer satisfaction. 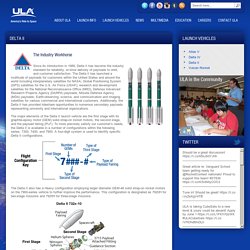 The Delta II has launched a multitude of payloads for customers within the United States and around the world including interplanetary satellites for NASA; Global Positioning System (GPS) satellites for the U.S. Air Force (USAF); research and development satellites for the National Reconnaissance Office (NRO), Defense Advanced Research Projects Agency (DARPA) payloads; Missile Defense Agency (MDA) payloads; Earth-observing, science, and communication and imaging satellites for various commercial and international customers. 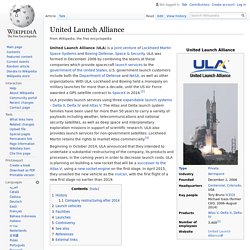 ULA was formed in December 2006 by combining the teams at these companies which provide spacecraft launch services to the government of the United States. U.S. government launch customers include both the Department of Defense and NASA, as well as other organizations. Launch discounts likely from SpaceX. By Chris Forrester January 20, 2016 Last weekend, a SpaceX launch rocket failed to correctly return to Earth after launching a satellite. However, in truth the rocket correctly landed almost exactly on target (on a floating barge), upright and sufficiently softly, but then a leg strut gave way and the landed rocket fell over and exploded. SpaceX founder Elon Musk posted an immediate Tweet that said at least this failure left larger rocket debris that could be examined! This is the third-time unlucky for a SpaceX barge landing, but was undoubtedly the most successful in that landing speed was correct, and the rocket arrived on target and stayed upright for those few seconds. 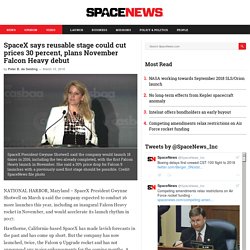 Hawthorne, California-based SpaceX has made lavish forecasts in the past and has come up short. But the company has now launched, twice, the Falcon 9 Upgrade rocket and has not announced any major enhancements for the coming months. A stable product line makes it easier to accelerate launch cadence. Boeing Head: SpaceX Making Company a Better Competitor.

WASHINGTON — The head of Boeing said Jan. 28 that SpaceX’s growing presence in the space industry will force his company to be more competitive in some segments of the market, but that Boeing would retain its edge in more advanced segments. 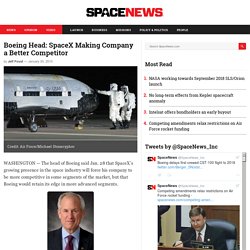 During a conference call with financial analysts and media after the release of the company’s 2014 financial report, Boeing Chairman and Chief Executive Jim McNerney addressed the competition Boeing, a partner with Lockheed Martin in the United Launch Alliance joint venture, faced from SpaceX. “I have respect for SpaceX,” McNerney said when asked about SpaceX’s effects on the market. SpaceX Says Falcon 9 To Compete For EELV This Year. In the next 10 years, Elon Musk wants to send people to Mars. 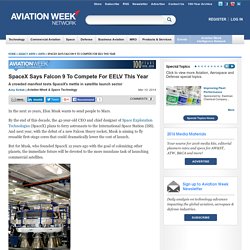 By the end of this decade, the 42-year-old CEO and chief designer of Space Exploration Technologies (SpaceX) plans to ferry astronauts to the International Space Station (ISS). And next year, with the debut of a new Falcon Heavy rocket, Musk is aiming to fly reusable first-stage cores that could dramatically lower the cost of launch. But for Musk, who founded SpaceX 12 years ago with the goal of colonizing other planets, the immediate future will be devoted to the more mundane task of launching commercial satellites.

SpaceX builds 70% of the Falcon 9 rocket at its headquarters in Hawthorne, Calif. NBN launcher Arianespace to cut jobs and costs to fight SpaceX. The European Ariane-5 rocket blasts off from French Guiana and launches a satellite to provide high-speed internet access to remote parts of Canada, late July 17, 2004. 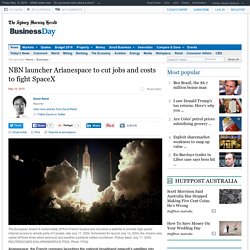 Forbes Welcome. Arianespace, SpaceX Virtually Tied on 2014 Launch Contracts. SpaceX's biggest competitor is a company you've never heard of. (Flickr/Alexander Stirn)An Ariane 5 rocket.SpaceX's biggest competitor isn't in the US, which is probably why you've never heard of them. They're a French-based company called Arianespace. They specialize in the production, operation, and sale of rockets, like their Ariane 5 rocket — their most powerful launch vehicle — shown in the image to the right. Even though you might be unfamiliar with this space company, they have been launching rockets into space for over 30 years — long before Elon Musk founded his private space company SpaceX in 2002.

When it was founded in 1980 (when Musk was just 9 years old), Arianespace became the world's first commercial provider of launch vehicles to help boost satellites into orbit. Arianespace has dominated the market for launch vehicles until only recently. Battle of the Heavyweight Rockets – SLS could face Exploration Class rival. August 29, 2014 by Chris Bergin With the recent announcement the Space Launch System (SLS) has become challenged by her schedule, the NASA rocket may soon find herself in a battle with a commercial “alternative”. Shotwell: Reusable Falcon 9 Would Cost $5 to $7 Million Per Launch at Parabolic Arc. CNES Begins Work on Reusable Rocket Stage. PARIS — The French space agency, CNES, on Jan. 5 said it has begun a small technology research program with Germany and other governments to develop a future liquid oxygen/methane-powered rocket stage that would be reusable.

Speaking the day before U.S. rocket maker SpaceX was scheduled to attempt to recover the first stage of its Falcon 9 rocket following the launch of a cargo freighter to the international space station, CNES officials said they have not abandoned reusability a decade after starting a joint project with Russia. The SpaceX launch has since been postponed to no earlier than Jan. 9. That project, called Baikal, has since been shelved as CNES officials concluded that a rocket system with a reusable first stage would need to launch some 40 times a year to make the effort worthwhile. Space launch market competition. In the early 2010s, a new phase of space launch market competition emerged in the space launch services market. History[edit] In the early decades of the Space Age—1950s–2000s—the government space agencies of the Soviet Union and United States pioneered space technology augmented by collaboration with affiliated design bureaus in the USSR and contracts with commercial companies in the US.

All rocket designs were built explicitly for government purposes. The European Space Agency was formed in 1975, largely following the same model of space technology development, and other national space agencies followed suit. Increased competition will challenge ESA’s space authority. By Clemens RumpfMonday, February 2, 2015 Who should be in charge of European space activities, the European Space Agency (ESA) or the European Union (EU)? The question is not new. With the Galileo program, the EU became the single biggest contributor to ESA’s budget. As such, the EU has tried to gain more power over ESA. Both ESA and the EU are European organizations with space authority, so why should the responsibility for space activities be divided between two institutions? SpaceX may upset firm&apos;s monopoly in launching Air Force satellites. Entrepreneur Elon Musk and his upstart company SpaceX are on the verge of upsetting a cozy and pricey military deal that for years has given two aerospace giants the exclusive right to launch the Air Force's most crucial satellites into orbit.

Lockheed-Boeing rocket venture needs commercial orders to survive. European satellite chief says industry faces challenges. China to Hold Long March Pricing Steady at Parabolic Arc. Space News reports on pricing for the Long March, a family of boosters that has racked up an impressive series of launch successes: The company selling Chinese Long March rockets on the commercial market said Sept. 24 that it is maintaining prices for telecommunications satellite missions at about $70 million, a price it says is backed by a 96 percent success record over 181 flights as of Sept. 23.In a series of presentations here, officials from Chinese government agencies and China Great Wall Industry Corp. Arianespace To ESA: We Need Help. A combination of new competition from U.S. SpaceX Challenge Has Arianespace Rethinking Pricing Policies. UPDATED Nov. 26, 4:39 p.m. SpaceX launches SES commercial TV satellite for Asia. Is SpaceX Changing the Rocket Equation? Arianespace Surpassed SpaceX in Commercial Launch Orders in 2015.