What Is Personal Identity? - Definition, Philosophy & Development. This lesson explores philosophies of personal identity and digs into several key theories on this topic. 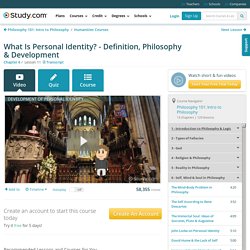 You will think about questions of human existence that have been debated throughout history and are still debated today. Explore our library of over 30,000 lessons Click "next lesson" whenever you finish a lesson and quiz. Got It You now have full access to our lessons and courses. You're 25% of the way through this course! Way to go! Congratulations on earning a badge for watching 10 videos but you've only scratched the surface. You've just earned a badge for watching 50 different lessons. Personal Identity. 1. 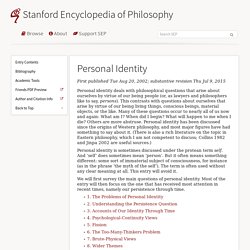 The Problems of Personal Identity There is no single problem of personal identity, but rather a wide range of questions that are at best loosely connected. Here are the most familiar: Who am I? Outside of philosophy, ‘personal identity’ usually refers to certain properties to which a person feels a special sense of attachment or ownership. Personhood. Persistence. Historically this question often arises out of the hope (or fear) that we might continue to exist after we die (as in Plato's Phaedo). Evidence. The evidence question dominated the literature on personal identity from the 1950s to the 1970s (good examples include Shoemaker 1963, 1970 and Penelhum 1967, 1970).

Population. You may think the number of people at any given time is simply the number of human organisms there are then (perhaps discounting those in a defective state that don't count as people, and ignoring nonhuman people if there are any). Project newspaper articles - strip to identity. The Importance of Personal Identity. This column is the first in a series of three designed to assist you in discovering and strengthening your own personal and more accurate self-concept. 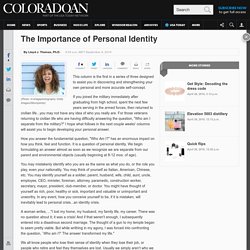 If you joined the military immediately after graduating from high school, spent the next few years serving in the armed forces, then returned to civilian life...you may not have any idea of who you really are. For those veterans returning to civilian life who are having difficulty answering the question, "Who am I separate from the military? " I hope what follows in the next couple weeks' columns will assist you to begin developing your personal answer. How you answer the fundamental question, "Who Am I? " has an enormous impact on how you think, feel and function. You may mistakenly identify who you are as the same as what you do, or the role you play, even your nationality.

A woman writes, ... " Film: Identity. Where Does Identity Come From? Imagine we rewound the tape of your life. 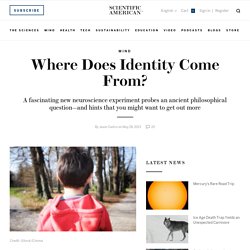 Your diplomas are pulled off of walls, unframed, and returned. Your children grow smaller, and then vanish. Soon, you too become smaller. Your adult teeth retract, your baby teeth return, and your traits and foibles start to slip away. Once language goes, you are not so much you as potential you. The question, of course, is what happens when we press “play” again. In the absence of a time rewinder, the next best experiment is to do what Julia Freund and her colleagues did in a simple, yet remarkable recent study.

In their experiment, Freund and her colleagues housed 40 genetically identical mice in a so-called “enriched” environment, and monitored their behavior over a period of three months (about 10 to 15 percent of their lifespan) during their early life. What made this study different from, say, a study of human twins is that the subjects’ movements could be tracked in extraordinary detail over a significant portion of their lifespan. Book: Identity Economics. Personal Identity. By Karl Perera – the owner and author of this website. 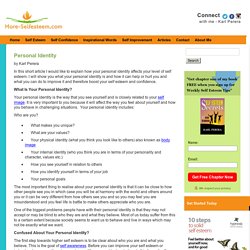 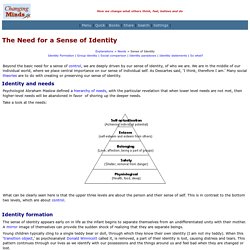 Beyond the basic need for a sense of control, we are deeply driven by our sense of identity, of who we are. We are in the middle of our individual world, where we place central importance on our sense of individual self. As Descartes said, ‘I think, therefore I am.’ Many social theories are to do with creating or preserving our sense of identity. Identity and needs Psychologist Abraham Maslow defined a hierarchy of needs, with the particular revelation that when lower level needs are not met, then higher-level needs will be abandoned in favor of shoring up the deeper needs. Take a look at the needs: What can be clearly seen here is that the upper three levels are about the person and their sense of self.