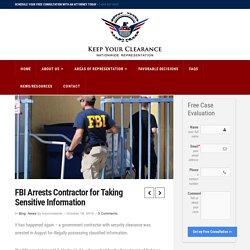 The FBI arrested Harold T. Martin III, 51, who worked for the Department of Defense, according to the New York Times. Authorities unsealed the Criminal Complaint against him on Oct. 5. Investigators discovered “thousands of pages of documents and dozens of computers or other electronic devices at his home and in his car, a large amount of it classified.” Martin, who had a top secret security clearance, eventually admitted taking documents and digital files he knew were classified, according to the FBI Criminal Complaint.

They also discovered evidence that Martin had posted classified documents and computer code online, the Times article stated. Martin was an employee of Booz Allen Hamilton, the consulting firm and NSA contractor that Edward Snowden worked for. Security Clearance Lawyer Shares News of the New NBIB. The Office of Personnel Management launched a new background investigation service Oct. 1 in an effort to address shortcomings and cyber vulnerabilities after the 2015 hack that exposed the personal information of 21.5 million people. 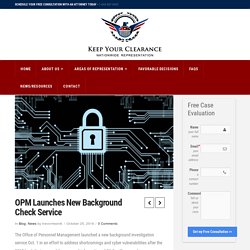 Charles Phalen Jr., a former CIA director of security, serves as director of the newly created National Background Investigations Bureau, according to Signal Magazine. The bureau “is designed with an enhanced focus on national security, customer service, and continuous process improvement to meet this critical government-wide need now and in the future,” according to the OPM website. The Defense Information Systems Agency will establish a National Background Investigative System for OPM that “guarantees the confidentiality and integrity of Americans’ sensitive, personally identifiable information,” said Christopher Catlin, NBIS program manager, in a recent presentation.

Additional improvements the bureau is tasked with include: CA Security Clearance Attorney Explains Approval Process. The security clearance approval process has been thrust into the national spotlight now that there is a newly elected president. 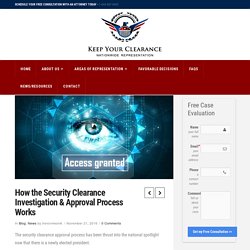 It’s a good time to provide a refresher on the clearance process and how it works, since it’s likely to be a discussion topic well into January when Trump is inaugurated. As far as Trump’s cabinet goes, Trump nominates members who are then presented to the Senate. Learn More. Security Clearance Breaches, Management Style Draw Critics. Defense Secretary Ash Carter and Director of National Intelligence James Clapper have called for President Barack Obama to remove National Security Agency Director Adm. 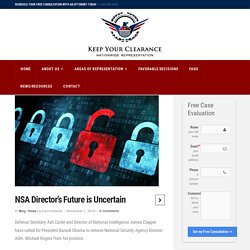 Michael Rogers from his position. Part of the reason revolves around Rogers’ job performance, according to the Chicago Tribune. Which Firm to Choose In Order To Get Your Security Clearance? Need To Understand the Security Clearance Review Process, Hire the Security Clearance Law Group. The US government has officially released a determination for its citizen by using which they can access the classified and sensitive information after a background verification in depth, this is called Security clearance. 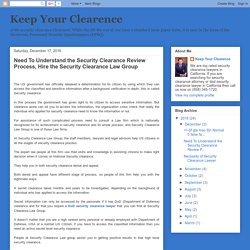 In this process the government has given right to its citizen to access sensitive information. But clearance alone can let you to access the information, the organization cross check that really the individual who applied for security clearance need to know the information or not. Necessity of Security Clearance Lawyer. Nowadays, people should have clearance to secret, classified and top secret information to apply for careers and jobs in a country. 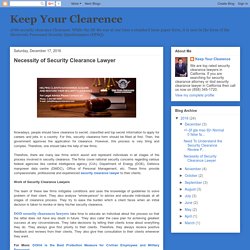 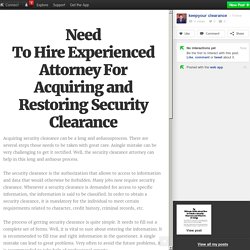 There are several steps those needs to be taken with great care. Asingle mistake can be very challenging to get it rectified. Groundwork Required to Plea a Safety Clearance Refutation. Summary If you experience you might have a difficulty from your past that might cause you complexity in getting permission, then checking with safety permission legal representative could stop a refutation. 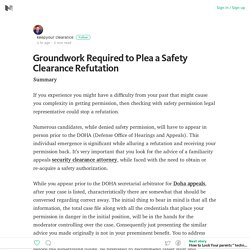 Numerous candidates, while denied safety permission, will have to appear in person prior to the DOHA (Defense Office of Hearings and Appeals). This individual emergence is significant while alluring a refutation and receiving your permission back. Preparation Required for Appealing a Security Clearance Denial. In case you are among applicants who have been denied security clearance, it is recommended to appear in person before defense office of hearings and appeals. 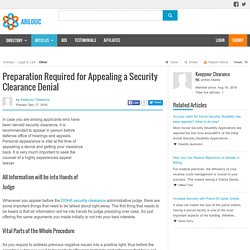 Personal appearance is vital at the time of appealing a denial and getting your clearance back. It is very much important to seek the counsel of a highly experienced appeal lawyer. All Information will be into Hands of Judge Whenever you appear before the DOHA security clearance administrative judge, there are some important things that need to be talked about right away. The first thing that needs to be beard is that all information will be into hands for judge presiding over case. Get Department Of Defense Security Clearance With The Help of an Expert Law Firm And Lawyers.

If you recognize you are going to have a problem and have already determined that you require a security clearance lawyer to assist you get through the DOD security clearance procedure, the most excellent time to retain the lawyer is at the beginning of the procedure; namely, before you complete the security survey. 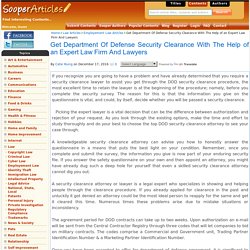 The reason for this is that the information you give on the questionnaire is vital, and could, by itself, decide whether you will be passed a security clearance. Picking the expert lawyer is a vital decision that can be the difference between authorization and rejection of your request. Get the Help of Professionals for the Security Clearance. Keep Your Clearence: DOHA Is the Best Protection Measure for Civilian Employees and Military Personnel. Let us discuss in brief about the DOHA Appeal in this article. DOHA means The Defence Office of Hearings and Appeals. Doha appeals work mainly the cases of DoD of civilian employees and military personnel.

They settle claims for the military services like pay and allowance, loss of damage etc. They conduct appeal and hearing for all the DoD components and 24 and other federal agencies and department. The hearing and appeal process will be completing different for each and every department. Keep Your Clearence: Best Legal Service for Security Clearance.

Are you just annoying to get a job nearby or are you eager to go where you can get the most funds? Keep Your Clearence: A Security Clearance Lawyer - What Do They Do? On the off chance that you have been acknowledged for a vocation that requires security clearance, it is needed for acquiring that vital clearance before making any occupation contract. The procedure is entirely straightforward truly, in that you round out and finish an arrangement of structures.

At that point you are generally welcomed to a meeting with a security clearance proficient, who will converse with you about the data you have given on your application, and attempt to get you know more about you and your life. For some this can be an overwhelming circumstance. A few people who may not beforehand have had experience of rounding out extensive applications, or being talked with locate this straightforward procedure scaring. The Lawyers Helping To Clear the Security Clearance in Various Sectors – Medium. Summary: Get Your Security Clearance With The Best Lawyers And Services. According to the US government, it is completely prohibited to involve in the government interference. An individual is not allows to know the secrets and usual works of the US government. Keep Your Clearence: Choose One Of The Best Doha Law Firms For Hassle-Free Security Clearance.

Posted by keepClearance in Other on September 19th, 2016 Though you might heard about the term ‘security clearance’ several times, but there are chances that you don’t know the real meaning of it. Know More About Security Clearance Appeals. Financial Considerations to Look at While Approaching For Doha Security Clearance Hearings – Medium.