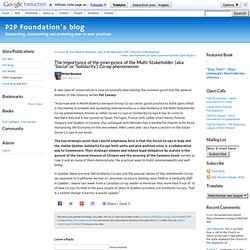 Policy Solutions for "Wicked" and Complex Social Problems. Social policy can’t just be about addressing the easy issues – there are very few – but has to tackle really deep-seated and complex problems such as poverty, health disparities or homelessness. 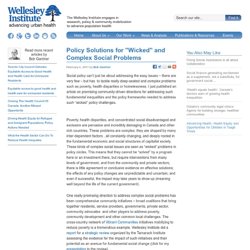 I just published an article on promising community-driven directions for addressing such fundamental inequalities and the policy frameworks needed to address such “wicked” policy challenges. In whose interests do we collaborate? Peterborough is on the cusp of doing something really exciting in education, with a whole host of people getting involved in the learning of young people. 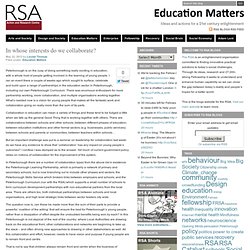 I ran an event there a couple of weeks ago which sought to surface, celebrate and build upon a range of partnerships in the education sector in Peterborough, including our own Peterborough Curriculum. There was enormous enthusiasm for more partnership working, more collaboration, and multiple organisations working together. What’s needed now is a vision for young people that makes all the fantastic work and collaboration going on really more than the sum of its parts. Collaboration in education can mean a variety of things and these tend to be fudged a little when we talk up the general Good Thing that is working together with others.

But an important challenge was put to a seminar on leadership for collaboration last week: do we have any evidence to show that ‘collaboration’ has any impact on young people’s outcomes? Comments. INL_V6.pdf (application/pdf Object) More thoughts on coliberation – part one – The Well-Played Game. Introduction: I was invited by DiGRA (the Digital Games Research Association) to talk about New Games and The Well-Played Game. 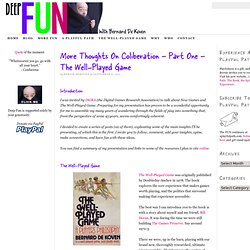 Preparing for my presentation has proven to be a wonderful opportunity for me to assemble my many years of wandering through the fields of play into something that, from the perspective of some 45 years, seems comfortingly coherent. The Penguin and the Leviathan: The Triumph of Cooperation Over Self-Interest - P2P Foundation. Occupy Wall Street and the Peer-to-Peer Revolution: a discussion with Michel Bauwens Part I. Innovation on the fringe. The New Radicals taking root - jerusalem journals. Cormac McCarthy on the Santa Fe Institute’s Brainy Halls. Opinion: Occupy Science? Biomedical research can learn from citizen science, which is grounded in strong relationships with study participants. 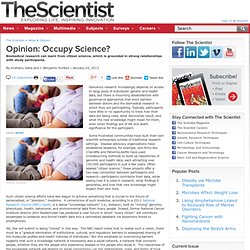 Istock, sjlocke Genomics research increasingly depends on access to large pools of individuals’ genetic and health data, but there is mounting dissatisfaction with governance approaches that erect barriers between donors and the biomedical research in which they are participating. Typically, participants have little or no opportunity to track how their data are being used, what discoveries result, and what the new knowledge might mean for them, even when findings are of life and death significance for the participant. Some frustrated communities have built their own scientific enterprises outside of traditional research settings. Such citizen science efforts have also begun to achieve something that is crucial to the future of personalized, or “precision,” medicine. OccupyScience !!! « broodjejaap. "Free Radicals" Celebrates Subversive Science. The Alchemy of Community. When the most ordinary things of daily life reveal the gold lying within “If you want to build a ship, don’t drum up people together to collect wood and don’t assign them tasks and work, but rather teach them to long for the endless immensity of the sea. 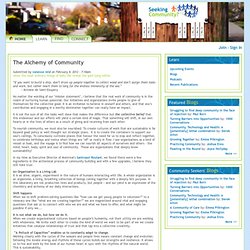 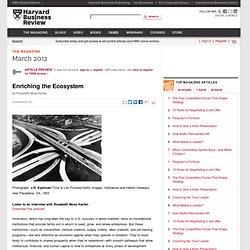 Eyerman/Time & Life Pictures/Getty Images: Hollywood and Harbor freeways near Pasadena, CA, 1953 Innovation, which has long been the key to U.S. success in world markets, rests on foundational institutions that provide fertile soil in which to seed, grow, and renew enterprises. But these institutions—such as universities, venture creators, supply chains, labor markets, and job-training programs—are less effective as economic agents when they operate in isolation. They’re more likely to contribute to shared prosperity when they’re networked—with smooth pathways that allow intellectual, financial, and human capital to flow to enterprises at every phase of development. 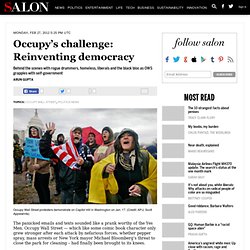 For nearly every Occupy movement in the United States, the General Assembly is seen as the legitimate decision-making body. But when it comes time to enforce a decision that some disagree with, its authority is often called into question. Tackling wicked problems through the transdisciplinary imagination - Valerie A. Brown, John Alfred Harris, Jacqueline Y. Russell. Valerie A. 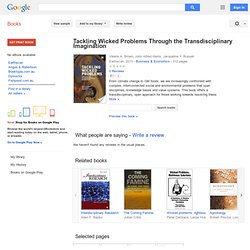 Brown AO, BSc MEd PhD is Director of the Local Sustainability Project, Fenner School of Environment and Society, Australian National University; and Emeritus Professor of Environmental Health, University of Western Sydney. She has held national advisory positions in public health, environmental management and higher education, and presented innovative programs in these fields in the Asia-Pacific, Canada and Europe. Valerie is the author of over 200 research papers and 12 books on linking social and environmental issues and social change, the most recent being Towards whole-of-community engagement: a toolkit of strategies 2004 (with Heather Aslin); Sustainability and health: supporting global integrity in public health Earthscan 2005 (with J.