Five Facts for the Dangerously Deluded Education Reformers. The business community smells profit margins as it continues to infiltrate the public education arena. 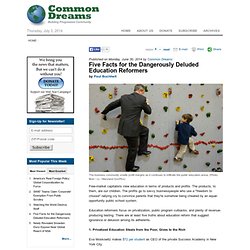 (Photo: flickr / cc / Maryland GovPics)Free-market capitalists view education in terms of products and profits. The products, to them, are our children. The profits go to savvy businesspeople who use a "freedom to choose" rallying cry to convince parents that they're somehow being cheated by an equal-opportunity public school system. Education reformers focus on privatization, public program cutbacks, and plenty of revenue-producing testing. There are at least five truths about education reform that suggest ignorance or delusion among its adherents. 1. Eva Moskowitz makes $72 per student as CEO of the private Success Academy in New York City.

Carmen Farina makes 19 cents per student as Chancellor of New York City Public Schools. A McKinsey report estimates that education can be a $1.1 trillion business in the United States. 2. But testing doesn't work. 3. 4. David F. 5. Buckminster Fuller Presages Online Education, with a Touch of TED, Netflix, and Pandora, in 1962. By Maria Popova A prophetic vision for mobile, time-shifted, tele-commuted, on-demand education. 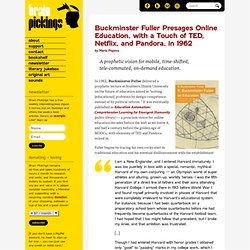 In 1962, Buckminster Fuller delivered a prophetic lecture at Southern Illinois University on the future of education aimed at “solving [educational] problems by design competence instead of by political reform.” It was eventually published as Education Automation: Comprehensive Learning for Emergent Humanity (public library) — a prescient vision for online education decades before the web as we know it, and half a century before the golden age of MOOCs, with elements of TED and Pandora mixed in. Fuller begins by tracing his own rocky start in traditional education and his eventual disillusionment with the establishment: I am a New Englander, and I entered Harvard immaturely. Globalization of Higher Education. 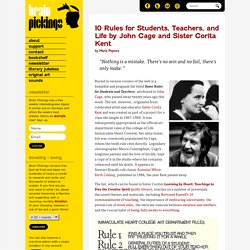 There’s no win and no fail, there’s only make.” Buried in various corners of the web is a beautiful and poignant list titled Some Rules for Students and Teachers, attributed to John Cage, who passed away twenty years ago this week. The list, however, originates from celebrated artist and educator Sister Corita Kent and was created as part of a project for a class she taught in 1967-1968. It was subsequently appropriated as the official art department rules at the college of LA’s Immaculate Heart Convent, her alma mater, but was commonly popularized by Cage, whom the tenth rule cites directly. RULE ONE: Find a place you trust, and then try trusting it for awhile.RULE TWO: General duties of a student — pull everything out of your teacher; pull everything out of your fellow students.RULE THREE: General duties of a teacher — pull everything out of your students. 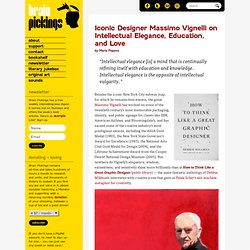 Intellectual elegance is the opposite of intellectual vulgarity.” Besides the iconic New York City subway map, for which he remains best-known, the great Massimo Vignelli has worked on some of the twentieth century’s most memorable packaging, identity, and public signage for clients like IBM, American Airlines, and Bloomingdale’s, and has earned some of the creative industry’s most prestigious awards, including the AIGA Gold Medal (1983), the New York State Governor’s Award for Excellence (1993), the National Arts Club Gold Medal for Design (2004), and the Lifetime Achievement Award from the Cooper Hewitt National Design Museum (2005). A champion of “intellectual elegance,” Vignelli explains his lifelong crusade against vulgarity: MV: When I talk about elegance, I mean intellectual elegance.

He offers an articulate definition of what design is really about: Donating = Loving. Adora Svitak: What adults can learn from kids. Ken Robinson: 10 talks on education. Ken Robinson: How to escape education's death valley. Sir Ken Robinson: Do schools kill creativity?