The Refugee Crisis 101, Inspiration for the YA novel Nowhere Boy by Katherine Marsh. What is the refugee crisis? 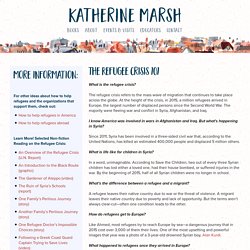 The refugee crisis refers to the mass wave of migration that continues to take place across the globe. At the height of the crisis, in 2015, a million refugees arrived in Europe, the largest number of displaced persons since the Second World War. The majority were fleeing war and conflict in Syria, Afghanistan, and Iraq. I know America was involved in wars in Afghanistan and Iraq. But what’s happening in Syria? Since 2011, Syria has been involved in a three-sided civil war that, according to the United Nations, has killed an estimated 400,000 people and displaced 5 million others. What is life like for children in Syria? In a word, unimaginable. What’s the difference between a refugee and a migrant? A refugee leaves their native country due to war or the threat of violence. How do refugees get to Europe? Like Ahmed, most refugees try to reach Europe by sea—a dangerous journey that in 2015 cost over 3,000 of them their lives. Were children really travelling alone? 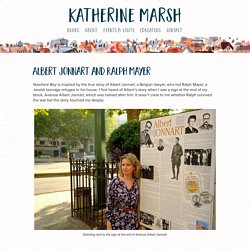 I first heard of Albert’s story when I saw a sign at the end of my block, Avenue Albert Jonnart, which was named after him. It wasn’t clear to me whether Ralph survived the war but the story touched me deeply. Standing next to the sign at the end of Avenue Albert Jonnart. Jonnart came from a distinguished Belgian French family. After studying law, he served on the Court of Appeals in the Belgian Congo and fought in the First World War, before settling into public life as a lawyer for his commune or township. Ralph’s father, Erich Mayer, was a client of Albert Jonnart’s. In August 1942, seventeen-year-old Ralph began to live secretly in an upper bedroom of the Jonnart family house. Original document registering the Mayer family as German-born Jews in Brussels, Belgium. Albert Jonnart and his wife Simone DePloige. Click here for The Refugee Crisis 101. Nowhere Boy. Nowhere Boy (Hardcover) By Katherine Marsh Roaring Brook Press, 9781250307576, 368pp. 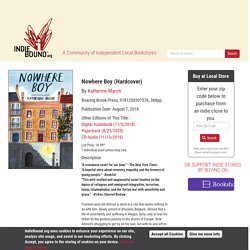 Publication Date: August 7, 2018 Other Editions of This Title: Digital Audiobook (11/5/2018) Paperback (8/25/2020) CD-Audio (11/13/2018) List Price: 16.99* * Individual store prices may vary. Description "A resistance novel for our time. " - The New York Times"A hopeful story about recovery, empathy, and the bravery of young people. " - Booklist "This well-crafted and suspenseful novel touches on the topics of refugees and immigrant integration, terrorism, Islam, Islamophobia, and the Syrian war with sensitivity and grace. " - Kirkus, Starred Review Fourteen-year-old Ahmed is stuck in a city that wants nothing to do with him. 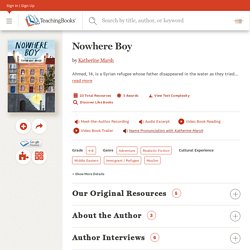 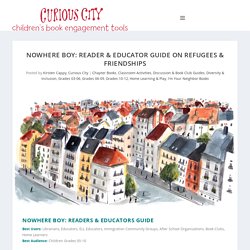 A book to build a culture of welcoming and belonging for immigrant and refugee families? A discussion to inspire global empathy and action? Louise El Yaafouri of Refugee Classroom, I’m Your Neighbor Books, and Curious City collaborated on an extensive guide for readers and educators to help you teach and share this crucial new middle grade novel. “If a global crisis is a collection of thousands of personal stories, what do we all gain from knowing those stories and one another?” Nowhere Boy (4 starred reviews!) The boys’ meeting is inevitable, but their trust and friendship is a triumph of their own making. Amazon.