Gender reveal party creator says enough already after latest wildfire. This week, as more than 7,000 acres in California were burned after a gender reveal led to a massive wildfire in San Bernardino County, blogger Jenna Karvunidis -- who is largely credited for creating the gender reveal party -- took to Facebook to condemn the over-the-top events. 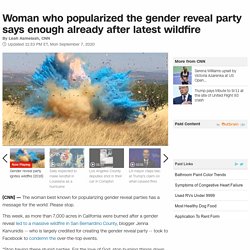 "Stop having these stupid parties. For the love of God, stop burning things down to tell everyone about your kid's penis. No one cares but you," she wrote. This isn't the first time a gender reveal party has led to catastrophe, and yet the celebrations have only grown in popularity. Here's how we got here. How these parties became deadly Karvunidis had her own gender reveal party back in 2008, before they became a Thing. "I just thought it would be really fun for everybody in the whole family to find out," Karvunidis told NPR last year. She wrote about it on her blog, High Gloss And Sauce, and at the time it garnered some local attention. But since 2008, these celebrations of life have turned into risky endeavors.

Przewalski's horse: Cloned colt could help preserve this endangered animal. The colt is a clone of a male Przewalski's horse and the first successful cloning of the species, San Diego Zoo officials said in a news release on September 4. 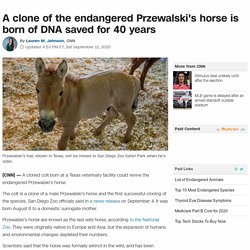 It was born August 6 to a domestic surrogate mother. Przewalski's horse are known as the last wild horse, according to the National Zoo. They were originally native to Europe and Asia, but the expansion of humans and environmental changes depleted their numbers. Scientists said that the horse was formally extinct in the wild, and has been surviving for the last 40 years primarily in zoos. Some herds have been found in Mongolia. "This birth expands the opportunity for genetic rescue of endangered wild species," said Ryan Phelan, executive director of Revive & Restore, a wildlife conservation organization promoting biotechnologies that's partnering with San Diego Zoo Global and ViaGen Equine on the cloning project. 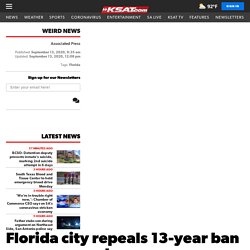 The Opa-locka City Commission voted Wednesday on a 4-1 vote to repeal both the original 2007 legislation and a 2013 ordinance that said women, not just men, could receive civil citations for wearing pants that exposed their undergarments. The Miami Herald reports that the vote was a first reading of the repeal, meaning it will need to be approved again at a subsequent commission meeting before it’s official. But the item was co-sponsored by four of the five commissioners. Around the city, which is northeast of Miami, signs still warn folks of the ordinance. They showing an image of two young men wearing pants below their waists and featuring the words: “No ifs, ands or butts ...

“I was never in support of it, even as a resident,” Vice Mayor Chris Davis, who sponsored the repeal, told the Miami Herald. Copyright 2020 The Associated Press. Snake lays eggs at zoo without being around male for 15 years. This Texas animal shelter is using tiny homes instead of kennels to house dogs in need. AUSTIN, Texas – One Texas animal shelter is giving dogs a new place to call home outside of just the standard kennels as they wait for their forever family. 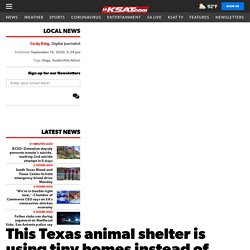 Austin Pets Alive! Took to social media on Wednesday, announcing that it will be using two tiny homes that will “double as comfortable and quiet housing for the most in-need dogs and workspaces for staff and volunteers.” The animal shelter said these new mini living spaces will provide more of a home-life environment for the dogs and will allow them to decompress and enhance their quality of life before they go to their forever home.

Each of the cottages will have its own yard and will have dog-friendly seating and workspaces, heating, and air conditioning. Dogs that are assigned to these tiny homes will move in permanently until they are fostered or an adoptive home is found for them, according to the shelter. The first pups that will use the tiny homes are expected to move in by October, shelter officials said. Austin Pets Alive! Paper towel shortage: Why it's hard to find paper towels again. Although finding paper towels for sale hasn't been quite as difficult as it was when the pandemic first hit the United States, finding them — especially at a normal price — still isn't always easy. 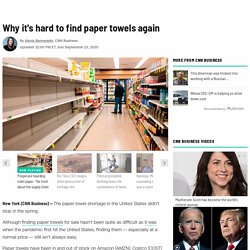 Paper towels have been in and out of stock on Amazon(AMZN), Costco(COST) and local stores. And when paper towels are available, customers can't always get the brand they want. Part of the reason for the shortage is people keep hoarding them: there was a massive surge in sales of Bounty paper towels in July, Procter & Gamble(PG) reported, as customers swept them off store shelves.