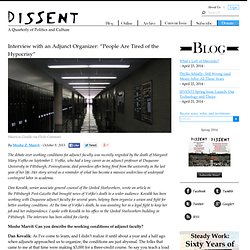 Vojtko, who had a long career as an adjunct professor at Duquesne University in Pittsburgh, Pennsylvania, died penniless after being fired from the university in the last year of her life. University Tries to Nip Professors’ Union in the Bud. A cautionary letter–and the rumored retention of a notorious union-buster–show Northeastern is nervous about adjunct faculty organizing. 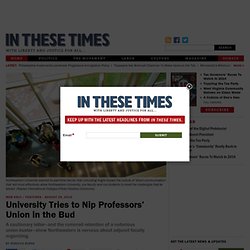 Adjuncts, who typically work on a contract basis, are vulnerable to retaliation by university administrations. But Machson-Carter is hopeful that heavy-handed tactics by the university will galvanize, rather than chill, organizing efforts. What does a research university in Boston have in common with the corporations Pfizer, Cablevision and IBM? They hire the same union-buster. According to Adjunct Action, a project of the Service Employees International Union (SEIU), Northeastern University has retained Jackson Lewis, a law firm used by major corporations to thwart employee organizing efforts. Adjunct Action has had modest success so far in its efforts to unionize non-tenure-track faculty at private colleges across Boston, which it began this spring.

. … Ultimately, the decision about whether to support SEIU or not is yours. No Rich Child Left Behind. Better Colleges Failing to Lure Talented Poor. The pattern contributes to widening economic inequality and low levels of mobility in this country, economists say, because college graduates earn so much more on average than nongraduates do. Low-income students who excel in high school often do not graduate from the less selective colleges they attend. Only 34 percent of high-achieving high school seniors in the bottom fourth of income distribution attended any one of the country’s 238 most selective colleges, according to the analysis, conducted by Caroline M.

Hoxby of Stanford and Christopher Avery of Harvard, two longtime education researchers. Among top students in the highest income quartile, that figure was 78 percent. The findings underscore that elite public and private colleges, despite a stated desire to recruit an economically diverse group of students, have largely failed to do so .

Many top low-income students instead attend community colleges or four-year institutions closer to their homes, the study found. Ms. The Hidden Supply of High-Achieving, Low Income Students. How Elite Colleges Still Aren't Diverse. A Simple Way to Send Poor Kids to Top Colleges. Economic Diversity Among the Top 25 Ranked Schools. Class-Based Admissions. Class-Based vs. Race-Based Admissions. But a crucial premise of the class-over-race argument is wrong. 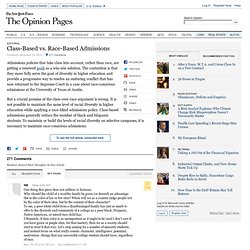 It is not possible to maintain the same level of racial diversity in higher education while applying a race-blind admissions policy. Class-based admissions generally reduce the number of black and Hispanic students. To maintain or build the levels of racial diversity on selective campuses, it is necessary to maintain race-conscious admissions. While there are higher shares of blacks and Hispanics among low-income Americans, their smaller shares of the whole population mean that whites make up by far the largest portion of low-income families. As Alan Krueger, now head of President Obama’s Council of Economic Advisers, and his co-authors wrote in 2006, “The correlation between race and family income, while strong, is not strong enough to permit the latter to function as a useful proxy for race in the pursuit of diversity.”

Shifts in American demographics since then have only reinforced this crucial need. How Students of Different Incomes Apply for College - Graphic. System Failure: The Collapse of Public Education. "I hated math. 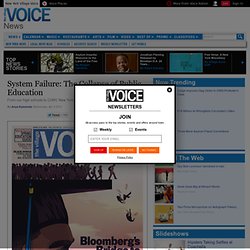 Math was like, the worst thing on the planet. I would be late. I would go to the bathroom and just sit there. " Jahleah Santiago, 18, widens her eyes, outlined in cat's-eye makeup. Santiago grew up in Flushing, Queens, of Puerto Rican and Native American descent. In the Michael Bloomberg era of school reform, we hear a lot about rising educational standards. Put another way, New York City officials openly admit that a high school diploma earned in our public schools today does not mean that a student is ready for college. Caleb Ferguson CUNY students like Jahleah Santiago don’t earn college credit for the remediation classes they must take after graduating from New York City public high schools.

Ashley Baret’s low Regents score placed her in remediation; now she’s hoping a new program called START will help her make up lost ground. Related Stories More About With 272,000 students and a $2.6 billion budget, CUNY is the fourth-largest public university system in the country. When the melting pot boils over - School choice. Alisa Rivera with her husband and their son, Nathan. 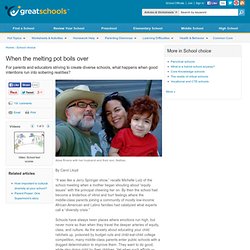 By Carol Lloyd “It was like a Jerry Springer show,” recalls Michelle Lutz of the school meeting when a mother began shouting about “equity issues” with the principal cheering her on. By then the school had become a tinderbox of vitriol and hurt feelings where the middle-class parents joining a community of mostly low-income African-American and Latino families had catalyzed what experts call a “diversity crisis.”

Schools have always been places where emotions run high, but never more so than when they travel the deeper arteries of equity, class, and culture.