City Unveils Campaign to Improve Girls’ Self-Esteem. Ruth Fremson/The New York Times DeVoray Wigfall, 12, right, with her mother, Twanna Cameron, 36, at City Hall. Mr. Bloomberg is taking on the popular, unattainable notions of beauty promoted by professional image-makers with a campaign that tells girls that they are beautiful the way they are. Gender bias in professional networks and citations. On the final day of the Monkey Cage gender gap symposium (see here, here, here, here, here, here, and here for earlier posts) we offer broader reflections from three distinguished scholars. Earlier Friday, Ashley Leeds wrote about the ways work by women is systematically devalued. Later today, you will hear from Beth Simmons. #BraveGirlsWant to Be More Than Eye Candy.

What Is Classical Music's Women Problem? : Deceptive Cadence. Australian conductor Simone Young, the outgoing artistic director of the Hamburg State Opera. Klaus Lefebvre/Courtesy of the artist Close your eyes, and you may think that this is 1913. Sexual harassment in the workplace is endemic. Sexual harassment at work often goes unreported, as people fear that they may lose their jobs or damage their careers if they 'rock the boat'. Photograph: Alamy "Was asked to join in threesome with boss and his deputy" … "Told to sit on my boss's lap if I wanted my Christmas bonus"… "Heard partners assessing female candidates according to their attractiveness"… "Told to get an abortion or resign as two pregnant workers was unfair" … Workplace harassment is one of the most common issues reported to the Everyday Sexism Project – in fact, we have collected nearly 10,000 entries on this topic alone.

So it is no surprise today that a new study by law firm Slater & Gordon has revealed that one in six women have had colleagues look down their blouse, almost half have experienced comments about their breasts in the workplace and one in eight have left jobs because workplace harassment has made them feel so uncomfortable. "When I was 23 my arse was regularly pinched at work.

Donations Pour in for "Agender" Teen Set on Fire on AC Transit Bus. The anger is growing. 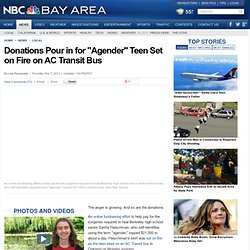 And so are the donations. An online fundraising effort to help pay for the surgeries required to heal Berkeley high school senior Sasha Fleischman, who self-identifies using the term "agender," topped $21,000 in about a day. Fleischman's skirt was set on fire as the teen slept on an AC Transit bus in Oakland on Monday evening. UPDATE: Suspect Charged in Adult Court with Hate Crime. New Israeli Legislation Aims To Change Definition of Rape To Include Male Victims. Israel's Laws Define Rape Narrowly, Ignoring Some Victims Haaretz A still from Menahem Roth’s 2012 film, “Pursued,” in which he documents his efforts to confront his molester. 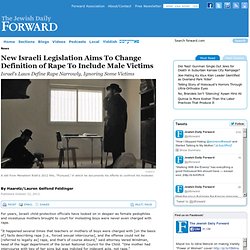 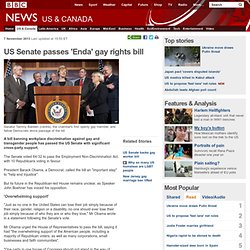 (That tech savvy, of course, played a pivotal role in Obama's victory.) What struck Bracy about the tech-crazed Bay Area, she recounted Thursday in a talk at the Personal Democracy Forum tech conference, was the jarring inequality visible everywhere in Silicon Valley—between rich and poor, between men and women, between white people and, well, everyone else. Bracy's talk featured some eye-popping charts on Silicon Valley's race and gender divide. How Raising The Minimum Wage Would Help Close The Gender Wage Gap. The gender wage gap in the United States still stands at 77 cents paid to women for every dollar a man makes, which barely budged over the past decade and actually widened last year .

One way to start closing that gap would be to raise the federal minimum wage , a new report from the National Women Law Center finds. The organization compared each state’s gender wage gap with whether it has a higher minimum wage than the federal floor of $7.25 (a figure that hasn’t been raised in three years). It found that of the ten states with the widest gaps, only two had a higher minimum wage. Meanwhile, among the ten states with the narrowest gaps, seven had instituted a higher wage floor. Taken together, in all the states that have a higher minimum wage the average wage gap is three cents smaller than in the rest. Three Naval Academy Midshipmen Accused of Sexual Assault.

Adria richards. A White Boy’s Observations of Sexism and the Adria Richards Fiasco. I've been watching the whole Adria Richards fiasco with a sense of horror and disgust.

I'm finally going to say something, but for the most part, it's going to be indirect. See, I'm a white guy, born as a member of an upper middle class white family. Feminism and Slut Shaming in MadMen » ThickCulture. I’ve been watching MadMen since its inception. 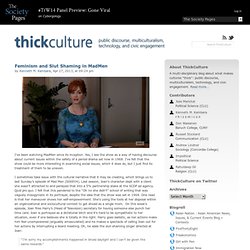 Yes, I see the show as a way of having discourse about current issues within the safety of a period drama set now in 1968. I’ve felt that the show could be more interesting in examining social issues, which it does do, but I just find its treatment of them to be uneven. I sometimes take issue with the cultural narrative that it may be creating, which brings us to last Sunday’s episode of Mad Men (S06E04). Last season, Joan’s character slept with a client she wasn’t attracted to and parlayed that into a 5% partnership stake at the SCDP ad agency. Wonder Women! The Untold Story of American Superheroines. 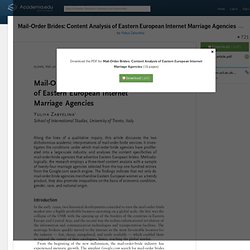 Driven by poverty, unemployment, and media images of Western lifestyles,women agree to become internet brides. They accept risky offers of marriage, hopingto ﬁnd a better life. Although some mail-order brides ﬁnally ﬁnd the opportunitiesthey seek, many turn out to be the victims of violence, sexual exploitation, and evenhuman trafﬁcking. Mail-Order Brides: The International Buying and Selling of Women. Introduction Thus far in the Sex in Stock series we have been raising awareness of situations in which women’s bodies can be ‘bought’ locally—sugar babies, strippers, and prostitutes. Our fourth project in the series will present the international purchase of women in the form of mail-order brides. Due to the sensitive and controversial nature of this subject, we at Project Social Art would like to assure the reader that we are NOT moralizing about a woman’s choice to become a mail-order bride. Our goal is to expose the existence of the mail-order bride phenomenon as a breeding ground for gender inequality, sexual violence against women, the exploitation of impoverished women, and to provide our readers with a background for understanding our final live-art piece/social experiment in the “Sex in Stock” series. 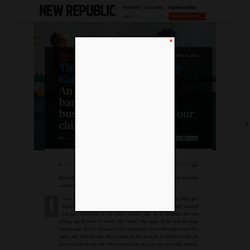 For the next few weeks, we'll be re-posting a selection of our most thought-provoking pieces of the year. It was 5:30 in the morning when Kenya Mire looked down at her baby girl, Kendyll, who was curled up tight on a foldaway crib. “Night, night,” Kendyll had just murmured in her quiet, serious way. At 20 months, she was picking up all sorts of words, like “baby,” the name of the doll she kept nearby, and “Bryce,” the name of her big brother. BITTER DIVIDE SPARKED ON IMMIGRATION RIGHTS. As a board member for the National Black Justice Coalition, a group of African-American LGBT activists who have worked for the past three years to change the tenor of the debate in black America over same-sex marriage, syndicated commentator Jasmyne Cannick has earned a reputation as a tough-minded advocate for the queer community. 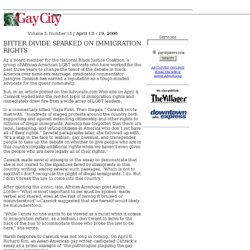 But, in an article posted on the Advocate.com Web site on April 4, Cannick waded into the red-hot topic of immigration rights and immediately drew fire from a wide array of LGBT leaders. In a commentary titled “Gays First, Then Illegals,” Cannick wrote that with, “hundreds of staged protests around the country both supporting and against extending citizenship and other rights to millions of illegal immigrants, America has forgotten that there are legal, taxpaying, and voting citizens in America who don’t yet have all of their rights.”