How Greek Parents Discipline Their Children. I've often written about the culture clash that exists when you are the child of immigrant parents, born and raised in New York City. 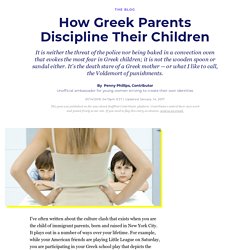 It plays out in a number of ways over your lifetime. For example, while your American friends are playing Little League on Saturday, you are participating in your Greek school play that depicts the defeat of the Ottoman Turks in 1821. You spend one night a year following a priest and the tomb of Jesus Christ around your neighborhood, at midnight, with 1000 other Orthodox churchgoers. Your childhood home in Queens, NY looks identical to every other home on the block except for the giant Greek flag hanging above the front door, and hog-tied lamb roasting on the front lawn. The biggest divergence of culture however has nothing to do with holidays or traditions.

Let's not sugarcoat it. Never has this been more clear to me than when I was in my neighborhood supermarket a few weeks ago watching a 7-year-old have a meltdown in the checkout line. Perplexing. Edge.org. What stories are most likely to go unreported? 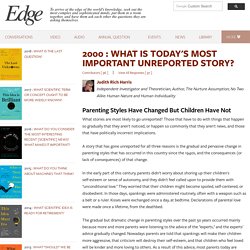 Those that have to do with things that happen so gradually that they aren't noticed, or happen so commonly that they aren't news, and those that have politically incorrect implications. A story that has gone unreported for all three reasons is the gradual and pervasive change in parenting styles that has occurred in this country since the 1940s, and the consequences (or lack of consequences) of that change. In the early part of this century, parents didn't worry about shoring up their children's self-esteem or sense of autonomy, and they didn't feel called upon to provide them with "unconditional love. " Edge.org. Long-Term Effects of Strict Parenting. A person's parenting style can have a long-lasting impact on a child’s emotional, social and psychological development, so it is important to adopt the most effective style for you and your child. 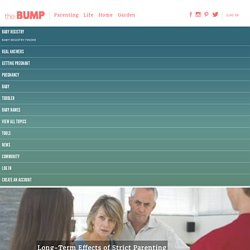 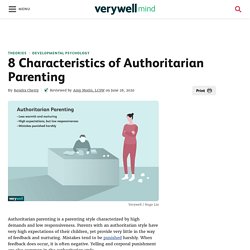 Parents with an authoritarian style have very high expectations of their children, yet provide very little in the way of feedback and nurturing. Mistakes tend to be punished harshly. When feedback does occur, it is often negative. Yelling and corporal punishment are also common in the authoritarian style. During the 1960s, developmental psychologist Diana Baumrind described three different types of parenting styles based on her research with preschool-age children. Parent behaviors linked to kids' anxiety, depression. Contact Us - Messinians in SA. Greek Culture - Family. U18 Div 3 1 vs Woodville Full Game. Dr Michael Carr-Gregg. Contact - Dr Justin Coulson's Happy Families.

How cultures around the world think about parenting. The crisis of American parenting, as anyone who has looked at the parenting section of a bookstore can attest, is that nobody knows what the hell they’re doing. 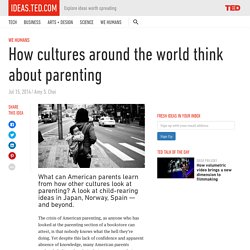 Yet despite this lack of confidence and apparent absence of knowledge, many American parents zealously believe that their choices carve out their children’s futures. Indeed, they seek the advice of expert after expert in the field in order to succeed at one goal: to raise the happiest, the most successful, and the most well-adjusted leaders of the future. But what dangers lay in thinking that there is one “right” way to parent?

How much of how we parent is actually dictated by our culture? How do the ways we parent express the essentialness of who we are, as a nation? “Americans have no script,” says Jennifer Senior (TED Talk: For parents, happiness is a very high bar), author of All Joy and No Fun: The Paradox of Modern Parenthood. Helicoptor parents. The real reason why Asian kids excel at school. How do Asian parents make their kids so smart they outperform their western peers? 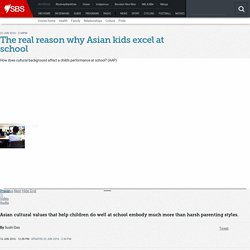 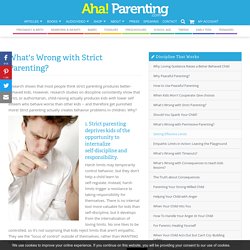 However, research studies on discipline consistently show that strict, or authoritarian, child-raising actually produces kids with lower self esteem who behave worse than other kids -- and therefore get punished more! Strict parenting actually creates behavior problems in children. Why? 1. Strict parenting deprives kids of the opportunity to internalize self-discipline and responsibility. Harsh limits may temporarily control behavior, but they don’t help a child learn to self-regulate. 2. Kids learn what they live and what you model, right? 3.

That's because authoritarian child raising makes it clear to kids that part of them is not acceptable, and that parents aren't there to help them learn to cope and manage those difficult feelings that drive them to act out.