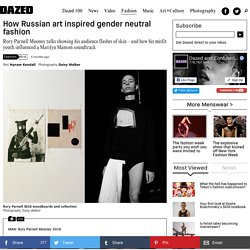 Models – both street cast and chosen from agency Tomorrow is Another Day – stomped out confidently to songs that referenced Mooney’s “angsty youth” – Marilyn Manson's Antichrist Superstar – and they bore far more skin than we are used to seeing on a runway. “We really wanted to reveal the body but also cover it up, reveal more than is normally seen,” he said backstage of the peekaboo cut-outs that revealed unexpected areas of flesh. Every teen is Sweden is getting a feminist guidebook. A recent gender gap report showed that Sweden is still leading the way in the search for equality. 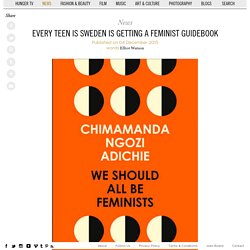 Girls Against is changing the culture of ‘gig groping’ - Features. Ask a female friend of yours if she's ever been groped at a concert, and the answer will most likely be yes – either she’s faced having hands on her body without consent, or she’ll know someone who has. 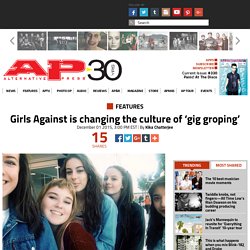 The same anonymity of a crowded gig that makes an audience feel like home also enables sexual assault for countless women who become victims in a space that should only encourage happiness and love. Hannah Camilleri of Glasgow, Scotland was one of those victims, and she had a story to share. After being groped at a Peace show, she recounted her experience to her friend Chloe who then tweeted about it. HINDS. In a music industry that is, still, largely coordinated by middle-aged white men, Hinds have faced a considerable amount of backlash. 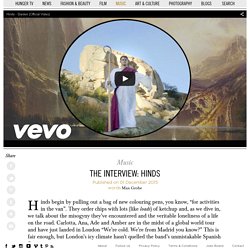 Not so much from the industry itself but from the press: “It’s the way the write about us,” says Carlotta. “They don’t do it on purpose but it’s always the same ‘cute girls on stage’. That’s all they see. Tate Modern highlights pop art by women ignored by sexist establishment. Work by female artists from the 1960s and 70s that was marginalised and ignored by a sexist art establishment is finally getting recognition in a major pop art show at Tate Modern. 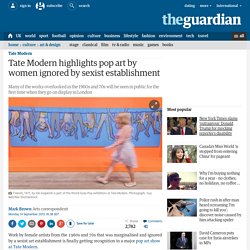 “It’s never too late,” said Jessica Morgan, curator of the World Goes Pop exhibition, explaining how she and her fellow curators spent five years uncovering the hidden stories from an art movement largely remembered as Anglo-American and male. The part played by female artists in particular had been “removed and erased” from the story of pop art. One of those artists is Judy Chicago who made her name in 1979 with her installation The Dinner Party, on permanent display at the Brooklyn Museum. Feminism in London conference: sex work, glass ceilings and ‘vulvanomics’ It’s a grey Saturday morning and the lobby of London’s Hilton Metropole hotel is filled with rugby fans wearing matching All Blacks jackets. 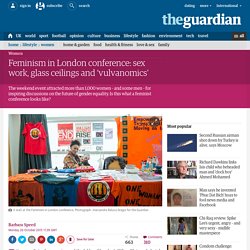 Projected on to the wall above their heads is a huge line drawing of three vulvas. As 9am comes and goes, they’re surrounded by women (and men, but mostly women) queueing up for their green-and-purple wristbands, chatting about sex trafficking and the glass ceiling. We’re here – more than 1,000 of us – for the annual Feminism in London conference, two days of talks, speeches and workshops. The conference was founded in 2008 by the London Feminist Network, and, in 2010, Lisa-Marie Taylor attended for the first time. Meet the Stemettes events aim to entice girls into Stem. Stemettes ran a multi-location campaign in November to encourage young women to pursue careers in science, technology, engineering and mathematics (Stem). 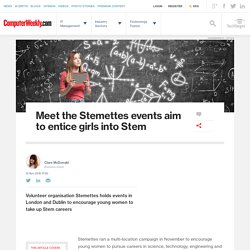 The volunteer group, which was founded by Anne-Marie Imafidon, ran panels in London and Dublin that showcased speakers from different Stem fields and celebrated Ada Lovelace Day – a day which champions women in the Stem space. “The multi-city Meet the Stemettes events were hugely important in allowing girls to feel part of a global community of girls in Stem,” said Stemettes co-founder Jacquelyn Guderley. “Meeting female Stem role models, taking part in mini networking sessions and having the opportunity to ask panellists anything they like will be an experience that gives them confidence as they build their own Stem careers.”

A recent Wise report found that only 14.4% of the people working in Stem are female, and an IET skills survey found that women account for only 9% of the engineering workforce. Rethinking the female figure in the 21st century. The female figure has been immortalised in art for centuries: from the Aphrodite and Sleeping Venuses to the 19th century salon nude. 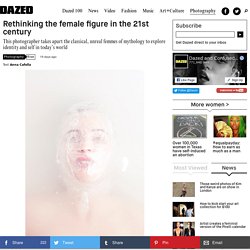 In classical art, we see the sculpted, sexualised but sanitised woman. LCC graduate Nina Parsons’ latest project Hairy Legs and a Golden Goblet takes inspiration from Greek mythology, she says, to “look specifically at how the atrocious female figure is being portrayed”. “With a satirical approach, I recreated these figures in a modern world, thereby taming their powerful attraction and making them into comic representation of the femme fatale,” Parsons explains. Plan to axe feminism from A-level politics triggers protest. A move by the UK government to drop feminism from the A-level politics syllabus has triggered outrage among campaigners and students. 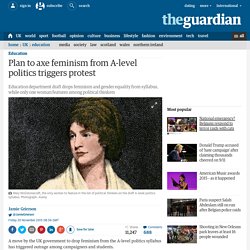 The section on feminism in a revised version of the course put to consultation by the Department for Education has been removed, along with the topics of sex/gender, gender equality and patriarchy. Furthermore, only one woman, Mary Wollstonecraft, appears in a list of seven political thinkers in the draft. 31 Campaign Women's Equality 2015. About - Women's Equality. The Women’s Equality Party is a new collaborative force in British politics uniting people of all genders, diverse ages, backgrounds, ethnicities, beliefs and experiences in the shared determination to see women enjoy the same rights and opportunities as men so that all can flourish. 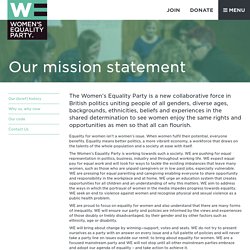 Equality for women isn’t a women’s issue. When women fulfil their potential, everyone benefits. Equality means better politics, a more vibrant economy, a workforce that draws on the talents of the whole population and a society at ease with itself. The Women’s Equality Party is working towards such a society. WE are pushing for equal representation in politics, business, industry and throughout working life. 'The Government wants to stop teaching women's politics? I'm not surprised' Nigeria: Aisha Alhassan - an Inspiration to Women in Politics. OpinionBy Agaju Madugba The recent proclamation of Aisha Alhassan as the winner of the 2015 governorship election in Taraba State has attracted varied reactions from across the country more so as she gets the enviable position of the first woman to be elected governor in the history of Nigeria. Although President Muhammadu Buhari last Wednesday also inaugurated her as Minister of Women Affairs, Alhassan, fondly called Mama Taraba, is most likely to resume duties at the Government House, Jalingo, seat of the Taraba State government if the Appeal Court upholds the judgment of the Taraba State Elections Petitions Tribunal.

The Tribunal sitting in Abuja had nullified the election of Governor Darius Dickson Ishaku of the Peoples Democratic Party (PDP) during the April 11, 2015 election and declared Senator Aisha Jummai Alhassan of the All Progressives Congress (APC) as the duly elected governor in the state. Forget Facebook: try the new LGBTQ social network platform.

There’s a social network for every community out there. There’s Stache Passions for people really into moustaches, Vampire Freaks for goths and Slipknot fans, and weird corridors of 4chan for men’s rights activists. So it was only a matter of time before a platform purely for the LGBTQ community found its feet. Q is not quite a convention social network like Facebook and it’s not quite a dating app. What it aims to do is cultivate authentic personal bonds between people. In an interview with Slate, Eric Cervini, Q’s creator, said that he thinks of it primarily as “a platform to meet,” one that allows LGBTQ individuals to reach out to one another “in a non-hypersexualized context.” Moschino makes history with first boy in Barbie ad.

Moschino has dropped the ad for its Barbie, a 30-second video which, for the first time in the doll’s 56-year history, features a boy. “So fierce!” He says, while placing a quilted shopper bag on the arm of his doll dressed in a leather two-piece from Moschino’s AW14 collection. In 2015 it’s a generally accepted fact that gender specific toys can have a negative impact on children.

While they may seem harmless, the archaic lessons they teach kids about gender are not. Guns and trucks tell boys that masculinity is about being aggressive, active and strong while dolls and tea sets tell girls that femininity is about being passive, pretty and gentle. However – it has to be said that while this boy busts the stereotype of the gun-wielding, truck-driving man, he does reinforce that of the feminine, fashion-obsessed gay man.

Watch Nicki Minaj deliver a powerful poem about sex and race. If you need some major inspiration today, then look no further than Nicki Minaj’s on-point rendition of Maya Angelou’s famous 1978 poem “Still I Rise”, a recital that was delivered on Wednesday night as part of A&E Network’s benefit concert, Shining a Light: A Concert for Progress on Race in America. Fittingly, the poem explores ideas of racism, misogyny and sexuality, all issues that Minaj has been vocal about in the past. And it’s hard to deny that the rapper’s delivery is total perfection. “Does my sassiness upset you?” She asks, raising one eyebrow with a half-smile. “Why are you beset with gloom? Minaj appeared alongsie other artists such as Sia, Miguel and Pharrell Williams, who were all there to address racial conflicts in America and raise money for the nonprofit organisation United Way Worldwide.

Is this a turning point for sexism in the music industry? Iconic Feminist Zine Spare Rib Now Available Online. Equal Pay Day: Why Women Now Work For Free. Victoria’s Secret shows are modern sexism uncovered. Is there evidence of evolution among the sort of men who make a living by curating collections of much younger, semi-naked women? Fashion has to do much more if it is serious about catwalk diversity. Contemporary Art and Feminism. Contemporary Art and Feminism. F generation: feminism, art, progressions is a collaborative platform for exploring feminism in contemporary art. This artist has found a new way to #freethenipple. Equal Pay is 118 Years Away.

The Global Gender Gap Report is in. And it makes for grim reading. Whilst patrons of the patriarchy protest that progress is being made, the statistics show that women are only earning what men earned ten years ago. That particular statistic is published alongside the equally depressing line, “progress towards wage equality and labour force parity has stalled markedly since 2009/2010.” Fake ad agency sells female empowerment to brands. Dove started it.

Soft piano music floating through the minimalist warehouse space as a woman sits down across from a sketch artist. Playboy Will No Longer Feature Nudes. Women free bleed outside parliament to protest tampon tax. A third wave of feminism is rising – and here's why we need to surf it now. What would be on our dream feminist school syllabus? Meet the teen girls fighting sexual assault at music venues. The cyber feminist leaking her own nudes. Independent Online. ​Should retailers promote genderless shopping? Will Genderless Fashion Change Retail?