Detroit in the 1940s - The Atlantic. The early part of the 20th century saw the city of Detroit, Michigan, rise to prominence on the huge growth of the auto industry and related manufacturers. 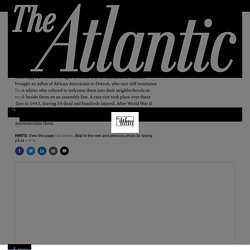 The 1940s were boom years of development, but the decade was full of upheaval and change, as factories re-tooled to build war machines, and women started taking on men's roles in the workplace, as men shipped overseas to fight in World War II. The need for workers brought an influx of African-Americans to Detroit, who met stiff resistance from whites who refused to welcome them into their neighborhoods or work beside them on an assembly line. A race riot took place over three days in 1943, leaving 34 dead and hundreds injured. Patriotism Crosses the Color Line: African Americans in World War II. 1967 Detroit riot - Wikipedia. The 1967 Detroit riot, also known as the 12th Street riot, was a violent public disorder that turned into a civil disturbance in Detroit, Michigan. 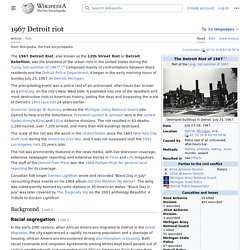 It began in the early morning hours of Sunday, July 23, 1967. The precipitating event was a police raid of an unlicensed, after-hours bar then known as a blind pig, just north of the corner of 12th Street (today Rosa Parks Boulevard) and Clairmount Avenue on the city's Near West Side. Police confrontations with patrons and observers on the street evolved into one of the deadliest and most destructive riots in the history of the United States, lasting five days and surpassing the violence and property destruction of Detroit's 1943 race riot. Detroit race riot of 1943 - Wikipedia. The Detroit race riot took place in Detroit, Michigan, of the United States, from the evening of June 20 through the early morning of June 22. 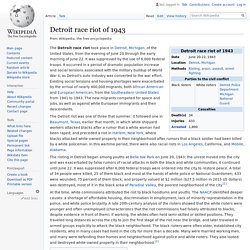 It was suppressed by the use of 6,000 Federal troops. It occurred in a period of dramatic population increase and social tensions associated with the military buildup of World War II, as Detroit's auto industry was converted to the war effort. Existing social tensions and housing shortages were exacerbated by the arrival of nearly 400,000 migrants, both African American and European American, from the Southeastern United States from 1941 to 1943. The new migrants competed for space and jobs, as well as against white European immigrants and their descendants. The rioting in Detroit began among youths at Belle Isle Park on June 20, 1943; the unrest moved into the city and was exacerbated by false rumors of racial attacks in both the black and white communities. 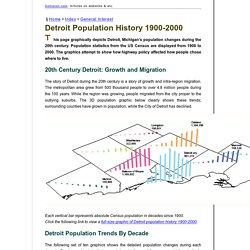 Population statistics from the US Census are displayed from 1900 to 2000. The graphics attempt to show how highway policy affected how people chose where to live. 20th Century Detroit: Growth and Migration The story of Detroit during the 20th century is a story of growth and intra-region migration. The Rise and Fall of Jim Crow . Jim Crow Stories . U.S. in World War II. Most of the black soldiers who enlisted in the armed services during World War II knew that they would serve in segregated units. 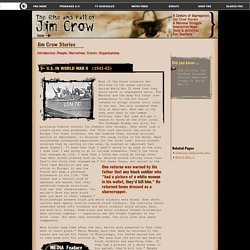 The Marines and the Army Air Corps (the predecessor to the Air Force) refused to accept blacks until later in the war. The navy accepted them only as mess men. Most men in the army were used in non-combat military jobs. But some did get a chance to serve at the front lines.