Short term memory. Long-Term Memory definition - AlleyDog.com. "Long Term Memory" Clip - Inside Out. Short and Long Term Memory - How Human Memory Works. Once a memory is created, it must be stored (no matter how briefly). 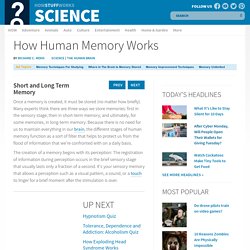 Many experts think there are three ways we store memories: first in the sensory stage; then in short-term memory; and ultimately, for some memories, in long-term memory. Because there is no need for us to maintain everything in our brain, the different stages of human memory function as a sort of filter that helps to protect us from the flood of information that we're confronted with on a daily basis.

Sensory Memory - Memories taken in by the senses. What Is Long-Term Memory? How Does It Work? Long-term memory refers to the storage of information over an extended period. 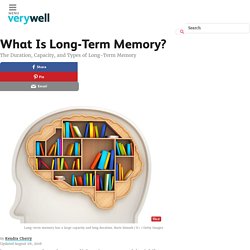 If you can remember something that happened more than just a few moment ago whether it occurred just hours ago or decades earlier, then it is a long-term memory. This information is largely outside of our awareness, but can be called into working memory to be used when needed. Some of this information is relatively easy to recall while other memories are much harder to access. Parts of the Brain - Memory & the Brain. The human brain is hugely interconnected but three major components can be identified: the cerebrum, the cerebellum and the brain stem. 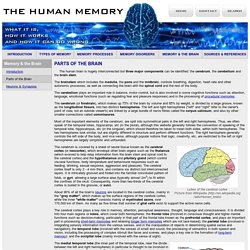 The brainstem which includes the medulla, the pons and the midbrain, controls breathing, digestion, heart rate and other autonomic processes, as well as connecting the brain with the spinal cord and the rest of the body. The cerebellum plays an important role in balance, motor control, but is also involved in some cognitive functions such as attention, language, emotional functions (such as regulating fear and pleasure responses) and in the processing of procedural memories.

Types of Memory. What we usually think of as “memory” in day-to-day usage is actually long-term memory, but there are also important short-term and sensory memory processes, which must be worked through before a long-term memory can be established. 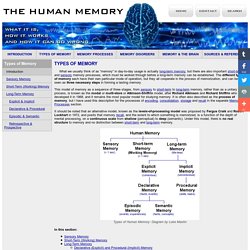 The different types of memory each have their own particular mode of operation, but they all cooperate in the process of memorization, and can be seen as three necessary steps in forming a lasting memory. This model of memory as a sequence of three stages, from sensory to short-term to long-term memory, rather than as a unitary process, is known as the modal or multi-store or Atkinson-Shiffrin model, after Richard Atkinson and Richard Shiffrin who developed it in 1968, and it remains the most popular model for studying memory. It is often also described as the process of memory, but I have used this description for the processes of encoding, consolidation, storage and recall in the separate Memory Processes section. 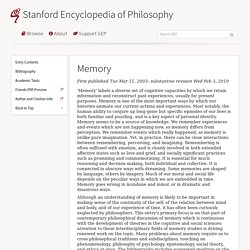 The Concept of Memory At the end of an intricate treatment of remembering in chapter 9 of The Analysis of Mind, Bertrand Russell laments that “this analysis of memory is probably extremely faulty, but I do not know how to improve it” (1921, p. 187). In similar vein, one of Hume's editors complains that “the unsatisfactory nature of Hume's account of memory is noticed by nearly all his commentators.