FOOOOD recipes, tips, how to...

Danny trejo. Los Angeles – Explore Parts Unknown. Around halfway through the shoot, somebody called me and asked if I knew about “the Morrissey thing.” 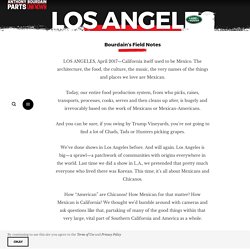 They said, “Morrissey is HUGE with Chicanos! Check it out.” This seemed, frankly, an incongruous if not an outright unbelievable assertion. If true, what was it about Morrissey—an English son of Irish immigrants, famous for his songs about doomed love, bad sex, homoeroticism, vulnerability, and alienation—that resonated so powerfully with Mexican-Americans? So I started asking everybody I spoke with as we filmed—from Ultimate Fighting stars Nate and Nick Diaz and Gilbert Melendez—to action hero Danny Trejo. In the end, I think, this question cracked the code. And what young Mexican and Mexican-American chefs are doing—here and in Mexico—is some of the most exciting and promising news in food. Learn to Cook: Bridget Lancaster Explains How to Grind Meat for Perfect Burgers. Explore Parts Unknown – Eat, Drink, Know, Go: The world according to Anthony Bourdain.

Science: For the Best Burgers, Don't Buy Ground Beef—See Why It's Best to Grind Meat Yourself! Sandor Katz: The Science And 'Art Of Fermentation' Yogurt is produced by the bacterial fermentation of milk. 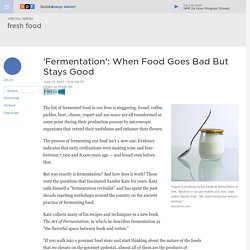 "Bacteria in our gut enable us to live," says author Sandor Katz. "We could not survive without bacteria. " iStockphoto.com hide caption toggle caption iStockphoto.com The list of fermented food in our lives is staggering: bread, coffee, pickles, beer, cheese, yogurt and soy sauce are all transformed at some point during their production process by microscopic organisms that extend their usefulness and enhance their flavors. The process of fermenting our food isn't a new one: Evidence indicates that early civilizations were making wine and beer between 7,000 and 8,000 years ago — and bread even before that.

But was exactly is fermentation? Katz collects many of his recipes and techniques in a new book, The Art of Fermentation, in which he describes fermentation as "the flavorful space between fresh and rotten. " Take cheese, for instance. Starting With Sauerkraut Courtesy of the author "The flavors transform very quickly," he says. UC-Davis Food Safety Laboratory: Cutting Board Research. Dean O. 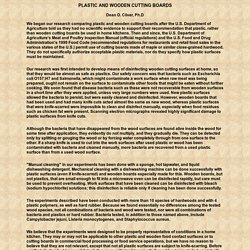 Cliver, Ph.D We began our research comparing plastic and wooden cutting boards after the U.S. Department of Agriculture told us they had no scientific evidence to support their recommendation that plastic, rather than wooden cutting boards be used in home kitchens. Then and since, the U.S. Department of Agriculture's Meat and Poultry Inspection Manual (official regulations) and the U.S. Our research was first intended to develop means of disinfecting wooden cutting surfaces at home, so that they would be almost as safe as plastics. Although the bacteria that have disappeared from the wood surfaces are found alive inside the wood for some time after application, they evidently do not multiply, and they gradually die.

"Manual cleaning" in our experiments has been done with a sponge, hot tapwater, and liquid dishwashing detergent. The experiments described have been conducted with more than 10 species of hardwoods and with 4 plastic polymers, as well as hard rubber. How to Grind Beef Meat. How to grind beef.The Art of Doing Stuff. I don’t know how many of you have seen the movie Food Inc., but the other night my fella and I sat down to watch it. 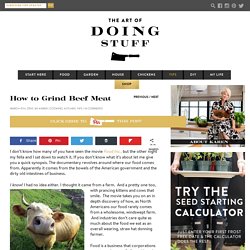 If you don’t know what it’s about let me give you a quick synopsis. The documentary revolves around where our food comes from. Apparently it comes from the bowels of the American government and the dirty old intestines of business. I know! I had no idea either. Smile. Food is a business that corporations want to make a profit from. Now, I’m freakishly suggestible with food at the best of times. So when we sat down side by side on the couch, and started up this movie I knew I was in trouble. We were smart enough not to watch this movie with a lap full of Chicken McNuggets and special sauce but even with a bowl of Crispers it was enough to make us a bit gaggy. The grease is what makes it good BECAUSE NOW I MAKE THE MOST DELICIOUS HAMBURGERS EVER! I found all sorts of crap about what you could do with ground beef but very, very little about what was actually in it.