Companies Promote STEM Through Collaboration, Connecting STEM to Real Life. The United States Bureau of Labor Statistics Spring 2014 report, “STEM 101: Intro to Tomorrow’s Jobs,” states that jobs in occupations related to STEM are projected to increase to more than 9 million between 2012 and 2022, resulting in growth of approximately 1 million more jobs over 2012 employment levels. 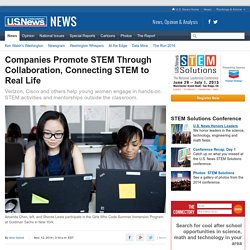 [SPECIAL REPORT: The U.S. News/Raytheon STEM Index] That sounds like a good thing, but it might not be: According to “The Global STEM Paradox,” a white paper soon to be published by the New York Academy of Sciences and prepared with consulting firm FSG, recruiters in the United States are having a hard time finding candidates for 75 percent of jobs that will require middle- or high-level STEM skills by 2018. To address this skills gap, the New York Academy of Sciences launched the Global STEM Alliance, a global private-public partnership with industry, academic and educational institutions, government, and the nonprofit sector. [BROWSE: 2014 Best High Schools for STEM] Science & Engineering Practices Next Generation Science Standards. 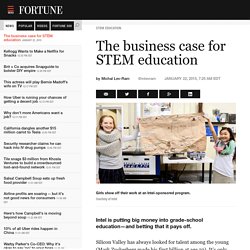 All rights reserved. Fortune.com is a part of the Time.com network of sites. Powered by WordPress.com VIP Email address or Password is incorrect Forgot Password? Want the Full Story? Privacy Policy Thank you for your interest in licensing Fortune content. Made with Code_Google.

The Spacesuit. How To Fix Gaming For Women And Minorities, According To One Major Critic. It's no big secret that the tech and video game industries have a problem with diversity. 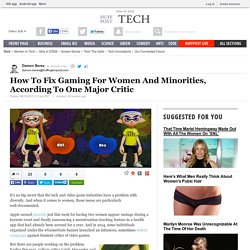 And when it comes to women, those issues are particularly well-documented. Apple earned plaudits just this week for having two women appear onstage during a keynote event and finally announcing a menstruation-tracking feature in a health app that had already been around for a year. And in 2014, some individuals organized under the #GamerGate banner launched an infamous, sometimes violent campaign against feminist critics of video games. Laura Hudson, an editor of Offworld.com. Attracting More Women to STEM Fields Is a Matter of National Security. Attracting more women to study science, technology, engineering and math isn't just an aspirational goal for education leaders and the business community – it's a "national security prerogative," according to the chief operating officer of the National Geospatial-Intelligence Agency. 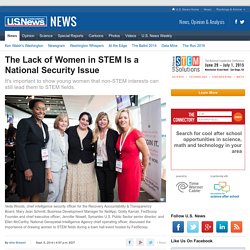 It's no secret that women and minorities are significantly underrepresented in the STEM fields. Although women make up about half of the American workforce, they represent less than one-quarter of those employed in STEM fields, according to the U.S. Learning in 3D: Making STEM Real. My six year-old nephew wakes up on a Saturday morning and plays Lego Star Wars on the Wii. 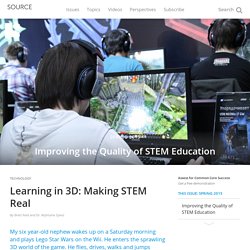 He enters the sprawling 3D world of the game. New Mathematics Could Neutralize Pathogens That Resist Antibiotics. Bacteria that make us sick are bad enough, but many of them also continually evolve in ways that help them develop resistance to common antibiotic drugs, making our medications less effective or even moot. 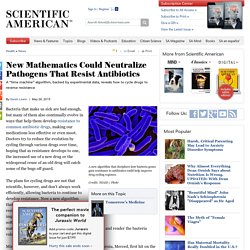 Doctors try to reduce the evolution by cycling through various drugs over time, hoping that as resistance develops to one, the increased use of a new drug or the widespread reuse of an old drug will catch some of the bugs off guard. The plans for cycling drugs are not that scientific, however, and don’t always work efficiently, allowing bacteria to continue to develop resistance. Now a new algorithm that deciphers how bacteria genes create resistance in the first place could greatly improve such a plan.

The “time machine” software, developed by biologists and mathematicians, could help reverse resistant mutations and render the bacteria vulnerable to drugs again. In this way the researchers could directly model possible changes to drug-resistant genes. STEM Gender Stereotypes Common Across the World. It's common for people to associate science fields with men more than women – a problem STEM education advocates in the U.S. are trying to solve. 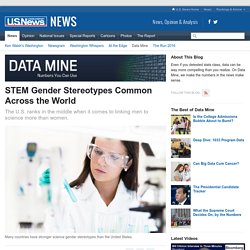 But America isn't the only country struggling with such a stereotype. In fact, a study published Monday by Northwestern University found people in the Netherlands were the most likely to associate science with men more than women. [READ: Report: Faculty Prefer Women for Tenure-Track STEM Positions] David Miller, lead author of the study and a doctoral student in psychology at Northwestern, studied data from nearly 350,000 people in 66 countries. The participants were measured on two types of stereotypes – explicit and implicit. 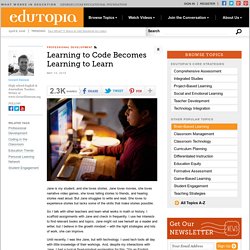 Jane loves movies, she loves narrative video games, she loves telling stories to friends, and hearing stories read aloud. But Jane struggles to write and read. She loves to experience stories but lacks some of the skills that make stories possible. So I talk with other teachers and learn what works in math or history.