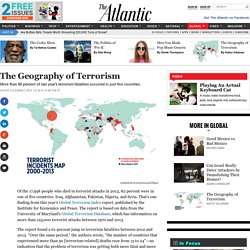 Institute for Economics and Peace Of the 17,958 people who died in terrorist attacks in 2013, 82 percent were in one of five countries: Iraq, Afghanistan, Pakistan, Nigeria, and Syria. That's one finding from this year's Global Terrorism Index report, published by the Institute for Economics and Peace. The report is based on data from the University of Maryland's Global Terrorism Database, which has information on more than 125,000 terrorist attacks between 1970 and 2013. The report found a 61-percent jump in terrorism fatalities between 2012 and 2013. But it's also striking where terrorism didn't occur.

Deaths From Terrorism, 2000-2013 Percentage of Global Terrorism-Related Deaths, 2013 Biggest Increases in Terrorism-Related Deaths, 2012-2013 Much of that period corresponded with massive international military efforts to root out terrorism. The Empty Soul of GOP Politics. 'Wait, Is This Thing On?': Health Care Reporters Share Obamacare War Wounds. The open enrollment period for Obamacare ended in April, and with it came a form of closure for all of the people who worked on health care reform. 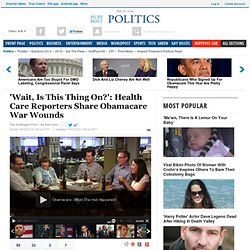 For the past four years, operatives, politicians, aides, lobbyists, activists and the like have toiled, first to craft a bill and then to defend it. They watched Congress nearly derail the prospects of reform and the Supreme Court nearly rule it unconstitutional. They waded through a presidential election during which repeal was on the table. They saw the launch of the health insurance exchanges marred by a glitchy website. And then they observed more than 8 million people sign up for insurance through those same exchanges. Health care reporters documented the process every step of the way. 10 Pro-Gun Myths, Shot Down. Fact-checking some of the gun lobby's favorite arguments shows they're full of holes. 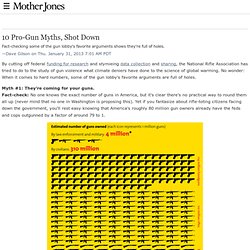 —Dave Gilson on Thu. January 31, 2013 7:01 AM PDT By cutting off federal funding for research and stymieing data collection and sharing, the National Rifle Association has tried to do to the study of gun violence what climate deniers have done to the science of global warming. Secret McConnell Recording: Tea Party Lost Primaries Because It “hasn’t learned to conceal its racism” <National Report>In a shocking recording obtained earlier today, Senator Mitch McConnell can be heard discussing his opinion of why he easily beat his Tea Party challenger and why the tea party fared poorly in the first round of 2014 primaries. 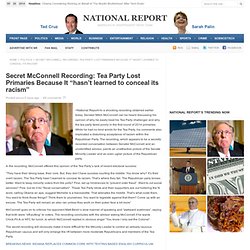 The Real Origins of the Religious Right - Randall Balmer - POLITICO Magazine. Now is the time. Our nation has suffered too much at the hands of dangerous people who use guns to commit horrific acts of violence. 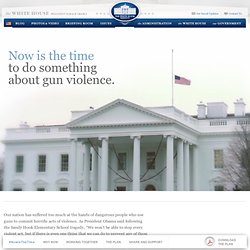 As President Obama said following the Sandy Hook Elementary School tragedy, “We won’t be able to stop every violent act, but if there is even one thing that we can do to prevent any of these events, we have a deep obligation, all of us, to try.” Most gun owners are responsible and law-abiding, and they use their guns safely. The President strongly believes that the Second Amendment guarantees an individual right to bear arms. Letter to a future Republican strategist regarding white people. To whom it may concern regarding the United States federal elections of 2014, 2016 and beyond: Allow me to introduce myself to you, the existing (or aspiring!) 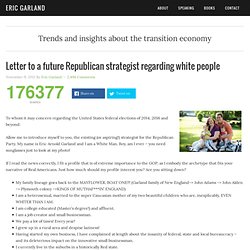 Strategist for the Republican Party. Congressman James McGovern : Contact Jim. The webpage, file or other resource that you were trying to view wasn't found at the location requested. 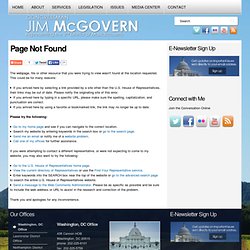 This could be for many reasons: If you arrived here by selecting a link provided by a site other than the U.S. House of Representatives, their links may be out of date. Welcome to Congressman James Lankford. Now is the time. Ten Truths All Progressives Should Understand for 2014 and Beyond (The PCTC Blog ) Year in photos through the White House lens. 60 Ridiculously Stupid Republican Quotes. The Obameter: Campaign Promises that are Promise Kept. Promise Kept rulings on The Obameter Create youth service corps "I am also going to create a 5-E Youth Service Corps. 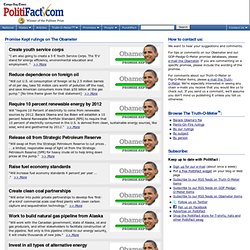 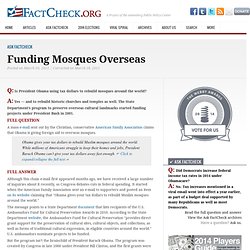 A: Yes — and to rebuild historic churches and temples as well. The State Department’s program to preserve overseas cultural landmarks started funding projects under President Bush in 2001. A mass e-mail sent out by the Christian, conservative American Family Association claims that Obama is giving foreign aid to overseas mosques. Although this chain e-mail first appeared months ago, we have received a large number of inquiries about it recently, as Congress debates cuts in federal spending.

It started when the American Family Association sent an e-mail to supporters and posted an item on its website claiming that "Obama gives your tax dollars to rebuild Muslim mosques around the world. " The message points to a State Department document that lists recipients of the U.S. But the program isn’t the brainchild of President Barack Obama. Union-Made Thanksgiving Shopping List. Who Can Beat Nixon Board Game. Click to view full size You can participate in the 1972 election by playing Who Can Beat Nixon? 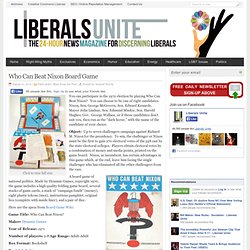