Wind power generates 140% of Denmark's electricity demand. So much power was produced by Denmark’s windfarms on Thursday that the country was able to meet its domestic electricity demand and export power to Norway, Germany and Sweden. 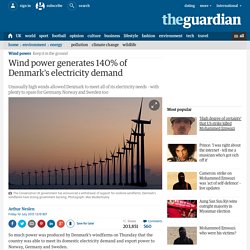 On an unusually windy day, Denmark found itself producing 116% of its national electricity needs from wind turbines yesterday evening. By 3am on Friday, when electricity demand dropped, that figure had risen to 140%. Interconnectors allowed 80% of the power surplus to be shared equally between Germany and Norway, which can store it in hydropower systems for use later. Sweden took the remaining fifth of excess power. “It shows that a world powered 100% by renewable energy is no fantasy,” said Oliver Joy, a spokesman for trade body the European Wind Energy Association. Representing the global wind energy industry. Adelaide Creates World’s First Solar-Powered Public Transit System. Barriers to Renewable Energy Technologies. From Powerful Solutions: Seven Ways to Switch America to Renewable Electricity, UCS, 1999 Renewable energy technologies have an enormous potential in the United States and that potential can be realized at a reasonable cost. 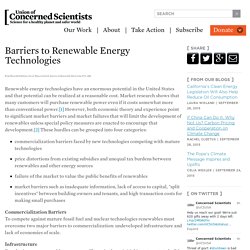 Market research shows that many customers will purchase renewable power even if it costs somewhat more than conventional power.[1] However, both economic theory and experience point to significant market barriers and market failures that will limit the development of renewables unless special policy measures are enacted to encourage that development.[2] These hurdles can be grouped into four categories: Commercialization BarriersTo compete against mature fossil fuel and nuclear technologies renewables must overcome two major barriers to commercialization: undeveloped infrastructure and lack of economies of scale. InfrastructureDeveloping new renewable resources will require large initial investments to build infrastructure.

Other signs are less hopeful. Lifornia Renewable Energy Overview and Programs. California, with its abundant natural resources, has a long history of support for renewable energy. 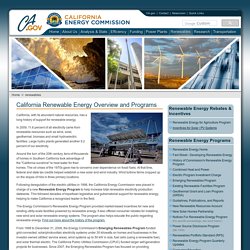 In 2009, 11.6 percent of all electricity came from renewable resources such as wind, solar, geothermal, biomass and small hydroelectric facilities. Large hydro plants generated another 9.2 percent of our electricity. Around the turn of the 20th century, tens-of-thousands of homes in Southern California took advantage of the "California sunshine" to heat water for their homes. The oil crises of the 1970s gave rise to concerns over dependence on fossil fuels. At that time, federal and state tax credits helped establish a new solar and wind industry. 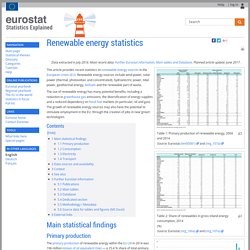 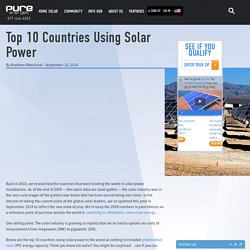 As of the end of 2009 — the latest data we could gather — the solar industry was in the very early stages of the global solar boom that has been accelerating ever since. In the interest of taking the current pulse of the global solar leaders, we’ve updated this post in September 2014 to reflect the new state of play. Aviation Emissions. Background Australia's civil aviation sector (both domestic and international) contributed a total of 17.7 million tonnes of carbon dioxide equivalent (Mt CO2-e) emissions in 2011 according to the National Greenhouse Gas Inventory 2011. 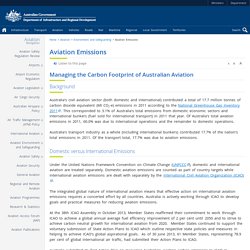 This corresponded to 3.1% of Australia's total emissions from domestic economic sectors and international bunkers (fuel sold for international transport) in 2011 that year. Environment - Sydney Trains. What lies beneath: Is tidal power the next big wave? - Australian Ethical - Super and Managed Funds. By Nathan Lim, International Shares Fund Portfolio Manager at Australian Ethical The world just got a little bit closer to tapping into the ocean’s tides as an energy source. 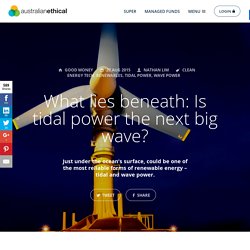 Construction is nearly completed on MeyGen – the world’s largest tidal stream energy project. This array of turbines on the seafloor is expected to begin delivering to the grid in 2016. Its development could be the catalyst that the fledgling tidal energy industry needs. Is blue the new green? 100% Of Dutch Electric Trains Could Run On Renewable Energy BY 2018. Clean Power. 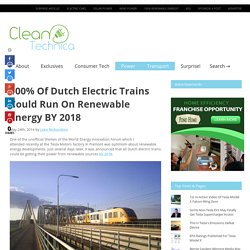 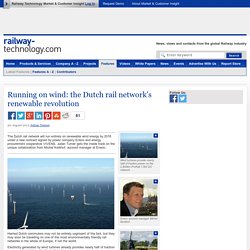 Julian Turner gets the inside track on the unique collaboration from Michel Kerkhof, account manager at Eneco. Harried Dutch commuters may not be entirely cognisant of the fact, but they may soon be travelling on one of the most environmentally friendly rail networks in the whole of Europe, if not the world. Electricity generated by wind turbines already provides nearly half of traction power on the 2,900km ProRail 1.5kV DC network, out of total consumption of around 1.4 terawatt hours (TWh) per year. Canberra light rail to run on 100pc renewable energy, Capital Metro Minister says. Posted Stage one of Canberra's light rail network will be powered by 100 per cent renewable energy, according to Capital Metro Minister Simon Corbell. 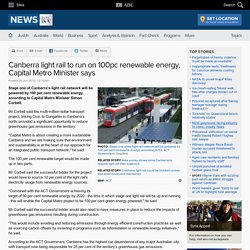 Mr Corbell said the multi-million-dollar transport project, linking Civic to Gungahlin in Canberra's north, provided a significant opportunity to reduce greenhouse gas emissions in the territory. "Capital Metro is about creating a more sustainable Canberra and we are making sure that environment and sustainability is at the heart of our approach for an integrated public transport network," he said. The 100 per cent renewable target would be made up in two parts. FTA - Climate, Environment and Transit - Transits Role in Environmental Sustainability. Public transportation plays an important role in confronting environmental challenges. Public transportation can: Improve air quality Public transportation can help metropolitan areas meet national air quality standards by reducing overall vehicle emissions and the pollutants that create smog.

Air quality is often the poorest in urban and suburban areas where traffic congestion is the worst. This has meant that residents of these areas, especially those living in close proximity to major thoroughfares or highways, confront much higher health risks due to poor air quality. Public transportation can reduce the need for many separate trips by private vehicles in dense urban areas, replacing many separate emissions-producing vehicles with fewer transit vehicles that generally emit less pollution on a per person basis. Most rail transit vehicles emit little or no pollution, as they are powered by electricity.

Reduce greenhouse gas emissions Save energy. No Cookies. Parking in Melbourne is set to soar even further. Picture: Tim Carrafa Source: HeraldSun PARKING in Melbourne is costing up to $88 a day as drivers brace for more price pain. Fees at some sites have soared as much as 50 per cent in 2 1/2 years. And a major operator warns some motorists will soon be slugged up to $600 a year extra to cover the State Government's increased CBD congestion tax grab. The Garnaut Climate Change Review. Final Report Professor Ross Garnaut was commissioned by all of the governments of Australia’s federation to examine the impacts of climate change on Australia and to recommend policy frameworks to improve the prospects of sustainable prosperity. The Garnaut Climate Change Review examines the impacts of climate change on the Australian economy and the costs of adaptation and mitigation.

It analyses the elements of an appropriate international policy response, and the challenges that face Australia in playing its proportionate part in that response. The Garnaut Climate Change Review is highly relevant to the global problem that is climate change. It considers what policies the international community should adopt in responding to climate change, and urges humanity to act now, and in concert, to develop the required policy response in time. Corrigenda to print version Download PDF. Untitled. An efficient public transport system is an essential part of a sustainable community. Riding the bus, train and ferry is fun, fast and eco-friendly. Transperth passengers reduce greenhouse gas emissions by 232,000 tonnes a year and greenhouse gas emissions from public transport is the equivalent of one third of private cars Below are some of the other ways that public transport helps the environment.

The PTA’s B-series electric trains, introduced in 2004, are fitted with regenerative brakes. When the breaks are applied, they generate electricity which is returned to the grid. Transperth is gradually replacing its diesel bus fleet with a new generation of gas-powered buses using Australian compressed natural gas. 1370.0 - Measures of Australia's Progress, 2010. Urban Transport and Climate Change. Key Recommendations. Developing the public transport sector in China. Urban Transport and Climate Change. Climate change. Quarterly update of Australia's National Greenhouse Gas Inventory: March 2015. Australia’s National Greenhouse Accounts are made up of a series of comprehensive reports and databases that estimate, and account for, Australia’s greenhouse gas emissions. These publications fulfill Australia’s international and domestic reporting requirements. The ‘Quarterly Update’ is a publication series that reports on the latest estimates of Australia’s national greenhouse gas inventory.