Features of Node.js v8. Node.Js was originally created by Ryan Dahl in 2009. 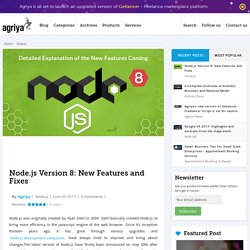 Dahl basically created Node.js to bring more efficiency in the javascript engine of the web browser. Since it’s inception thirteen years ago, it has gone through various upgrades and Node.js development companies have always tried to improve and bring about changes.The latest version of Node.js have finally been announced on may 30th after some delay. Having a codename called ‘Carbon’ this version of Node.js will provide long-term support in October 2017 and will be maintained till December 31st, 2019. Google I/0 Keynotes 2017. Earlier, we presented you with news summary surrounding Google’s Android O preview. 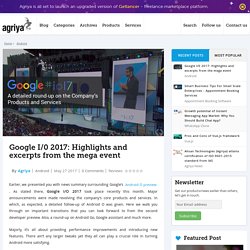 As stated there, Google I/O 2017 took place recently this month. Major announcements were made revolving the company’s core products and services. Pros and Cons of Vue.js framework - Agriya Blog. Vue.js one of the World’s leading language frameworks was developed by Evan You, a former employee of Google and Meteor Dev group in the year of 2013. 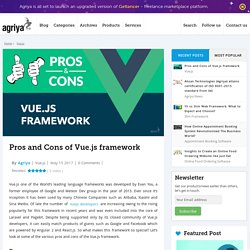 Ever since it’s inception it has been used by many Chinese Companies such as Alibaba, Xiaomi and Sina Weibo. Of late the number of Vuejs developers are increasing owing to the rising popularity for this framework in recent years and was even included into the core of Laravel and Pagekit. Technology Trends in 2017. In the year of 2016, we witnessed the rise of several new releases of popular languages and frameworks which have given us a new perspective to the digital world around us. 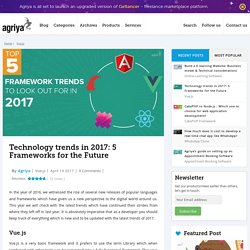 This year we will check with the latest trends which have continued their strides from where they left off in last year. Node.js vs Google Go. Google Go was created around the period of 2007. 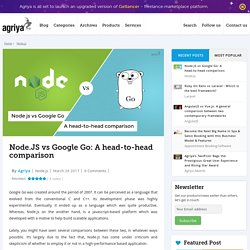 It can be perceived as a language that evolved from the conventional C and C++. Its development phase was highly experimental. Eventually, it ended up as a language which was quite productive. Whereas, Node.js on the another hand, is a Javascript-based platform which was developed with a motive to help build scalable applications. Lately, you might have seen several comparisons between these two, in whatever ways possible. Increasingly several developers are switching over to Google go, Also, some big names in the industry. AngularJS vs Vue.js: A general comparison between two contemporary frameworks - Agriya Blog. 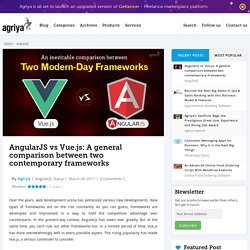 New types of frameworks are on the rise constantly. As you can guess, frameworks are developed and improvised in a way, to hold the competitive advantage over counterparts. In the present-day context, Angularjs has taken over greatly. But at the same time, you can’t rule out other frameworks too. Google’s Re-branded Brillo: Android Things (IoT) Developers Preview - Agriya Blog. Google is always very innovative in providing Internet-related products and services, out of which the latest one is the developer preview and re-brand of project Brillo, named Android Things. 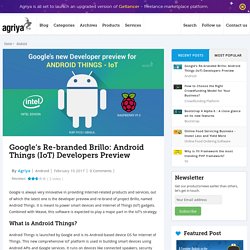 It is meant to power smart devices and Internet of Things (IoT) gadgets. Combined with Weave, this software is expected to play a major part in the IoT’s strategy. Bootstrap 4 Alpha 6. Bootstrap 4 alpha 6 has landed recently and is reported to be one of the biggest milestones to date. 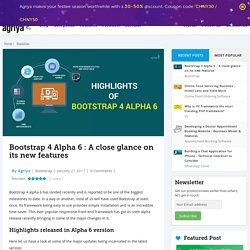 In a way or another, most of us will have used Bootstrap at least once. Its framework being easy to use provides simple installation and is an incredible time-saver. AngularJS 2 vs Aurelia. The call for responsive sites has been progressively increasing due to the fact that, easy accessibility of information is what everyone is up to. 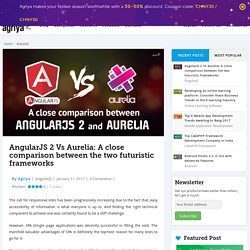 And finding the right technical component to achieve one was certainly found to be a stiff challenge. However, SPA (Single page application) was decently successful in filling the void. The manifold valuable advantages of SPA is definitely the topmost reason for many ones to go for it. The next pertinent question which arises when SPA becomes the subject of discussion is, what’s the framework that goes well with SPA?. The answer would be Angular 1, React, Durandal and much more to follow. Let’s break it down by contrasting and comparing each and every aspect of the two. Top 6 Mobile App Development Trends to Dominate 2017.

The year 2016 had been a marvelous time for all the tech lovers, introducing our world with plenty of new technologies. 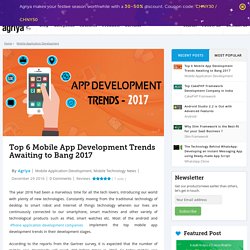 Constantly moving from the traditional technology of desktop to smart robot and Internet of things technology wherein our lives are continuously connected to our smartphone, smart machines and other variety of technological products such as iPad, smart watches etc. Most of the android and iPhone application development companies implement the top mobile app development trends in their development stages. According to the reports from the Gartner survey, it is expected that the number of mobile app downloads will reach 268 billion times in 2017. Android Studio 2.2 is Out with Advanced Features. There are a huge number of Android app developers out there and it is no wonder having given it a wide range across the globe, in which majority of the developers use Android Studio for their app creation.

There has been an estimated figure on its number as 92% of the top 125 apps and games make use of this Android Studio. Android Studio is a free integrated development environment (IDE) for the Android platform developments which is based on the IntelliJ Java IDE. This year has been an exciting time for the Android Studio wherein they have come up with another latest version of it- the Android Studio 2.2. How does the future look for AngularJS? The world of programming is constantly changing, and there are new products introduced to the market almost every day. However, many of them fail because of inability to understand the needs the programming community has. If you are not new to web development, you have surely noticed that JavaScript frameworks are becoming an extremely popular way to build web applications.

AngularJS is no more"- the future of TypeScript and Angular 2? AngularJS Basics: For Those Who Prefers jQuery When AngularJS first appeared, it came along as a crap. It looked like many broken pieces which have to be joined together. As this framework for building web applications progressed, it has gathered a lot of followers around the world.

An excellent documentation with cool examples was added to make the framework look simple and user-friendly. It performed great in learning trial apps like TodoMVC Project. However, in case the user has only interacted with jQuery libraries before, it might be difficult for him to master AngularJS fast. MVC done rightDeclarative user interfacePOJO data modelsDirectives as the way to add functionalityFlexible when using filtersNo need to write huge codesIn-place DOM manipulationsRelevant service providersContext aware communicationPrepared unit testing. Android 7.0 Nougat Features : What is New Behind the Screen? On 23rd August 2016, Google rolled out its new operating system, Android 7.0 Nougat to all Nexus devices after considering the feedback from millions of users and developers who are involved in Android application development over years.

Google claims this release as the “sweetest yet” and it contains more than 250 major modifications. Google has adopted a clear-cut and varied strategy for the creation of Android Nougat by allowing the novice developers to bring their applications easily to the new operating system. Nougat is not a completely different platform when compared to the ongoing Marshmallow, but it has some useful as well as user-friendly features including rapid multitasking ability, improved notification, and elevated performance to keep the users thrilled.

What users are going to receive a new in Nougat? Angular 2 vs React - What Developers Often Forget? One of the most common comments we heard from many AngularJS developers in 2015 was perhaps, “ I had a great time working with AngularJS 1, but I am shifting to React now”. The alpha version of Angular2 has been made accessible to programmers much earlier in this year, and the improved beta version is still on the wait. Even before the launch of Angular 2, a tug of war has been initiated between AngularJS developers and React developers. This resulted in the writing of many biased articles and blogs that highlight React as a winner by forgetting the essential merits of Angular. AngularJS Developers. What’s New in AngularJS2? AngularJS is a modern front-end framework designed by following the MVC pattern for developing Single Page Applications(SPA) rapidly.

Android N Vs iOS10: Which One will Create More Buzz? Whatever details, precisely ‘rumours’ we hear about the two most popular and competing operating systems, Android N and iOS 10 are spreading like a wildfire. Learn AngularJS 2 - Angularjs Developers. Angular vs iQuery. AngularJS vs jQuery - A Comparative Study. Agriya - Fancy Dress. Reasons to use React Native for Cross Platform Mobile application Development - App Development Services. Developers who deal with both Android application development and iOS application development can skip the hectic task of learning the coding principles of both these platforms. There certain handy cross platform mobile application development frameworks like Phone Gap which help mobile app developers to ease some difficulties to a large extent.

What Are The Most Popular Angular.Js Frameworks Used For Mobile App Development in 2016? - App Development Services. The wide range of technologies that are available right now, has opened up tremendous opportunities for developers to excel and master the art of website and mobile app developments. How Angularjs is the best Hybrid Framework to develop Mobile Applications for your business? - Angularjs Developers. AngularJs framework has reached a point, where it's hard to see it not being used in the building process of any modern day mobile applications. Angularjs Developers India , Angularjs Development Company - Agriya. Agriya Success Speech by VP-Marketing. Agriya Review - Client Toyin Aromorie appreciates the support and clone script.