Naruto. I'm sure most, if not all, the people who end up reading this review have seen Naruto before and those who haven't are probably put off by the pure unadulterated hatred this and the more recent Shippuuden garner. 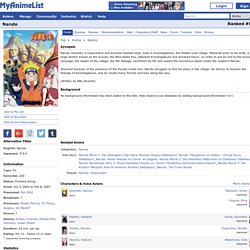 Okay, I guess "unadulterated" is a strong word but I digress.. In any case, before starting this review I want to point out that I haven't read the manga so I'm unsure as to what was or wasn't changed during the process of animating this story and I guess it's time to get the show on the road. *Also, let it be known that the infamous "Filler Arc" is not part of this review. Bleach. Bleach is one of the three so-called "mainstream shonen animes"; together with Naruto and One Piece these three are immensely popular, and the topic of endless comparison among their fans set out to prove that their favorite is the best out of them. 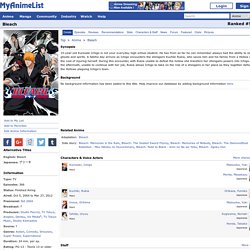 They simply refuse to exit their fanboyism to view the series in an objective light, which is a shame, because they are probably missing out on great adventures, which is the case of Bleach in many ways. If you want my review short and good, give Bleach a try no matter what people have said, as it, despite a lot of shortcomings, presents a most interesting and enthralling universe. Naruto: Shippuuden. Gintama' Edit after episode 13: I cried big wet tears at the excellent storytelling and well placed character development. 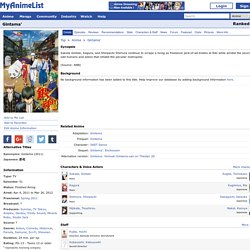 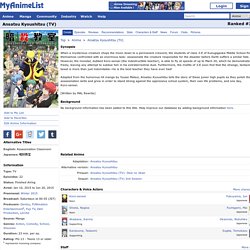 The inescapable part of our lives where we spend minimum 12 years of our lives learning a wide array of subjects, facts, and topics that we most likely will never use the majority of in our professional lives. So, with another school anime, what kind of anime would we get from something about a bunch of middle school students? Well...how about one where the middle school students try and kill their teacher? Story (8.08/10): E class, also known as the end class in the prep school of Kunugigaoka Junior high is a place fabled in the school to be the worst class, housing the worst students in the school, grade-wise. Boruto: Naruto the Movie. Like many anime fans of my generation, I began my life as an anime fan through Cartoon Network's Toonami block, featuring shounen classics such as Dragon Ball Z, Yu Yu Hakusho, and Rurouni Kenshin. 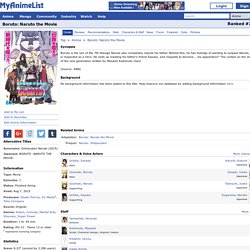 However, for me personally, I was on the tail end of those shows' airtime, only catching the Majin Buu saga and reruns of the first few episodes of other shows. I didn't come in at the beginning, so it wasn't like starting a brand new adventure, and it wasn't until around 2005 that I first got to experience the start of a brand new story, and that story, of course, was Naruto, an epic reinterpretation of ninjas combined with the superpower action/adventure style of DBZ and other shounen tropes, though of course I had no idea what shounen was at the time. Now, after over a decade of popularity in the US, and half a decade more in Japan, the last story in the Naruto-verse has finally been told.

As for the rest of the cast, most of them are fairly solid. One Punch Man. One Punch Man was recommended to me, several times, by my brother. 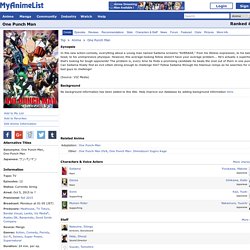 However, something about the title of the anime and the poster, just didn't do much for me to bother reading the synopsis or even get around to actually watching it. Until today. And boy oh boy, am I glad I did. One Punch Man is an incredibly deceptive anime. Shingeki no Kyojin. Oh dear Shingeki no Kyojin, where do I even begin. 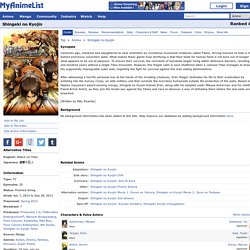 If you've talked with your friends about anime, then the couple anime that everyone talks about are Naruto, Bleach, One Piece, Dragon Ball, and... Shingeki no Kyojin. What's the difference between Shingeki and the rest? Shingeki only has 25 episodes so far yet it's on par in popularity with the other super long, Americanized anime. Death Note. Lots of thinking involved, and the main character exploits a 'magical power' to try to change the world. 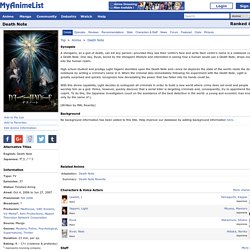 Genius's with a special power using their brain strategising and planning. Light and Lelouch have similar ideals and try to change the world in the name of justice but acts more like the villain Two student who get a power and use it to rid the world of evil, but it slowly takes them over. Psycho-Pass. I feel so sorry for anybody who missed out on this anime this year because it was absolutely brilliant. 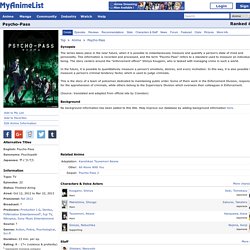 Likewise, I also feel sorry for anybody who didn’t, because Urobuchi Gen ripped their hearts out. The series is set in the near future in which it is possible to instantaneously quantify a person’s state of mind, personality, and probability of committing a crime, all recorded on an individual’s “Psycho-Pass”. Elfen Lied. "Elfen Lied" has been nothing short of a phenomenon. 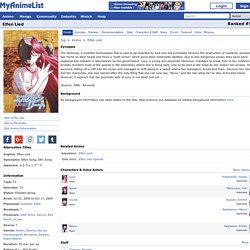 There were no big budget promotions (like "Full Metal Alchemist" was promoted, for example), the manga wasn't exactly red hot property (like "Death Note" was, for example), but it was suddenly catapulted to fame in an incredibly short time in 2004. It's the kind of overnight success story that films and anime have been made from. Zankyou no Terror (Terror in Resonance)

Oh, Zankyou no Terror... How much did I praise you during the early few episodes, but how could I know that you will turn out how you did. Zankyou no Terror (Terror in Resonance or Terror in Tokyo in English) was one of my most anticipated titles of the season and I am sure I was not alone. Death Parade. Gangsta. "As far back as I can remember, I always wanted to be a Gangster. " - Henry Hill (Goodfellas) When Gangsta first rolled up onto the scene in its '64 Impala, I thought to myself- wow, this show is going to be great.

It wowed us with some cool characters who weren't schoolkids, a gritty underworld type setting, and some ultraviolence not seen in a long time. Deadman Wonderland. As soon as I started watching Mirai Nikki, I noticed a big similarity to Deadman Wonderland. In both series there's a strange girl that will do anything to protect the boy, both have everyone playing a life or death "game" where you either kill or be killed, the characters are very similar, and in both the main girl is yandere. There are many other little details that make them similar, but so far those have been the biggest similarities I've seen. I felt the same sort of feeling while watching both of them, aswell. Despite the fact that the art is quite different, they're very much alike. same theme and similar characters but different setting.both have a main character with a weird girl in bizzare situations in a weird world and both have violence ...

Kuroshitsuji (Black Butler) So, Kuroshitsuji is an anime that is labelled “shounen” but I don’t really know why - it’s filled with bishounens, pretty clothes and the fancy Victorian age backdrop with massive shounen ai and shota undertones. Oh, and the obvious gay shinigami who keeps trying to kiss the butler. The story starts off with an eerie atmosphere, showing a 10 year old child who exchanges his soul for a demon butler to help exact his revenge against the people who killed his parents and humiliated him. Two-three years later they are still together; Ciel Phantomhive the 12 (later 13) year old Earl also the head of his house and company and Sebastian Michaelis, the demon butler who could do anything and together working for the Queen to solve mysteries and at the same time learning about Ciel’s past.

It would have been a great story. Highschool of the Dead. High School of the Dead is about a group of breasts trying to avoid getting eaten by zombies in whatever way possible. Tagging along with these breasts are 2 of our heroes, Kouta and Takashi. A couple pairs of breasts are even in on the action part when they're not bouncing across the screen like jello filled balloons hiding behind incomplete articles of clothing. But in all seriousness, High School of the Dead has actually been very enjoyable overall. And I'm not a fan of fan service. Story: Here are some breasts, here are some zombies, and here are 2 guys to enjoy and protect the breasts pretty much sums it up. Gantz. B Gata H Kei (B Gata H Kei: Yamada's First Time)