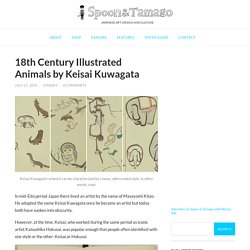 In other words, cute! In mid-Edo period Japan there lived an artist by the name of Masayoshi Kitao. He adopted the name Keisai Kuwagata once he became an artist but today both have sunken into obscurity. However, at the time, Keisai, who worked during the same period as iconic artist Katsushika Hokusai, was popular enough that people often identified with one style or the other: Keisai or Hokusai. If he was around today, perhaps Keisai’s name would have lived on as his loose, abbreviated style seems perfectly in touch with contemporary sensibilities. In 1795 he created Chujuryakugashiki (鳥獣略画式), an illustrated zoological booklet of dogs, birds, monkeys, elephants and all sorts of animals.

Could this perhaps be the origin of kawaii culture?? Hole Punch Flipbooks by Scott Blake. Artist Scott Blake, known widely for his barcode art, recently began experimenting with the humble hole puncher. 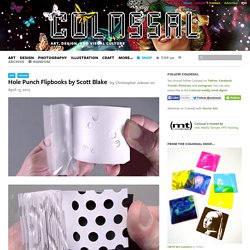 By punching different patterns that shift from page to page, he creates short animations that twist and rotate as you flip. He currently has four different versions available through his site. (via Junk Culture, Visual News, Boing Boing) This Winter Keep Warm With Grated Daikon Radish Sculptures in Your Nabe. Essentially Japan’s version of a hot pot, nabe (pronounced na-bay) is a large, simmering pot of meat and vegetables that’s served during the winter. 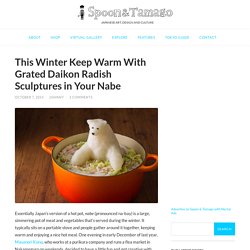 It typically sits on a portable stove and people gather around it together, keeping warm and enjoying a nice hot meal. One evening in early December of last year, Masanori Kono, who works at a purikura company and runs a flea market in Nakameguro on weekends, decided to have a little fun and get creative with one of the ingredients: grated daikon radish. Kono sculpted the grated radish into the shape of a polar bear, added a bit of seaweed for eyes and nose and plopped him in the center of his pot.

Coining his creation “Polar Bear Nabe,” he posted a picture to twitter, which quickly went viral. Shocked by its popularity, and surprised that no one had ever thought of this first, Kono decided to publish the recipe on CookPad. His online popularity has now landed him a book deal. She puts her hand on the paper and traces it with a pencil. Sounds boring? Wait till you see the result. Learn A New And Interesting Way To Dye Eggs With Cups Of Rice. In this video, SurpriseFunTV shows off a fun egg decorating kit called "Shake it! 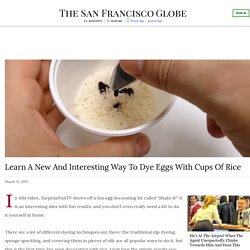 " It is an interesting idea with fun results, and you don't even really need a kit to do it yourself at home. There are a lot of different dyeing techniques out there: the traditional dip dyeing, sponge speckling, and covering them in pieces of silk are all popular ways to do it, but this is the first time I've seen decorating with rice. I just love the simple results you get and you can be so creative with this process. All you need to recreate this fun and simple idea is: white rice, liquid food coloring, and small disposable containers with lids (if you use washable containers you may never actually be able to get the dye off).

In the video, he only does one color for each egg, but it would be fun to do a multi-colored egg. How To Dye Eggs Using Silk. She Fills A Cake With Peeps. 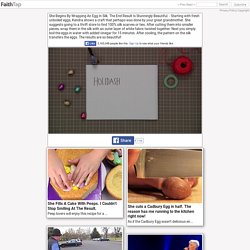 I Couldn’t Stop Smiling At The Result. Peep lovers will enjoy this recipe for a ... She cuts a Cadbury Egg in half. The reason has me running to the kitchen right now! As if the Cadbury Egg wasn’t delicious en... She Made A Layer Cake. Top 15 Japanese Stab Binding Tutorials on the Internet - i BookBinding. Following one of our most popular posts ‘Top 10 Coptic Stitch Binding Tutorials on the Internet‘ we have decided to do a post on the top 15 of the best Japanese Stab Binding instructions and tutorials we could find on the web (also known as the Traditional Chinese Binding Method though there are noticeable differences between the two). 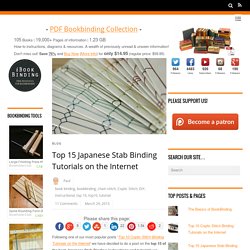 On this page you’ll also find a collection of video tutorials and many Japanese stab binding related resources (PDF’s, Stitching Patterns, Photo Galleries etc) for your enjoyment – we hope it serves as a good resource for some of you out there. Before you move on please consider leaving a comment at the bottom of this page. Our other tutorial collections: For those looking for a little background info on the Japanese Stab Binding Technique: Japanese Stab Binding – Tortoise Stitch by Ffion, mindflight.me More information on the history of Japanese Stab Binding. #1 Japanese 4-Hole Binding (Yotsume Toji) (Soft Cover) – Basic View Tutorial on Design Sponge Related.