Moved by the Law of Probability Chapter 1, a Harry Potter + Avengers Crossover fanfic. People get Murphy's Law wrong a lot. 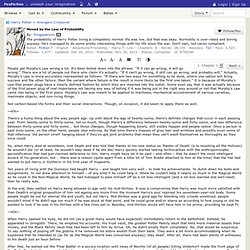 It's been boiled down into the phrase: "If it can go wrong, it will go wrong. " There are a lot of people out there who claim it's actually: "If it can't go wrong, it still can go wrong, and probably will. " Actually, Murphy's Law is more accurately represented as follows: "If there are two ways for something to be done, where one option will bring success and the other failure, then the variant where failure is the result is more likely be the first one taken. " It is because of Murphy's Law that power plugs have a clearly defined fashion by which they are inserted into the outlet. Some even say that it was actually because of the first power plug of real importance not having any way of telling if it was being put in the right way around or not that Murphy's Law came into being in the first place. The Madman and the Trickster - NessunDorma345 - Doctor Who, Marvel Cinematic Universe, The Avengers (2012.

Beat of a Treasure Chapter 1, a Hobbit + Sherlock Crossover fanfic. Disclaimer: I don't own the Hobbit (book or movie) or the BBC's TV series of Sherlock Holmes. 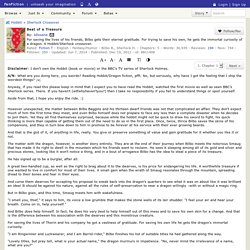 A/N: What are you doing here, you weirdo? Reading Hobbit/Dragon fiction, pfft. No, but seriously, why have I got the feeling that I ship the weirdest things? ;u; Anyway, if you read this please keep in mind that I expect you to have read the Hobbit, watched the first movie as well as seen BBC's Sherlock series. Aside from that, I hope you enjoy the ride. :) However unexpected, the matter between Bilbo Baggins and his thirteen dwarf friends was not that complicated an affair.

And in the Darkness Chapter 1: The beginning, a hobbit fanfic. Disclaimer: I don't own the Hobbit. 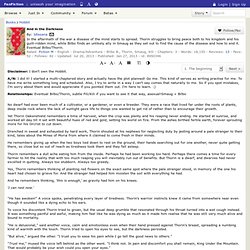 A/N: I did it! I started a multi-chaptered story and actually have the plot planned! Go me. This kind of serves as writing practise for me. To have me write something long and scheduled. Visited by a Doctor Chapter 1, a Doctor Who + Harry Potter Crossover fanfic. Disclaimer: All characters, names, settings etc belong to their respective copyright holders. 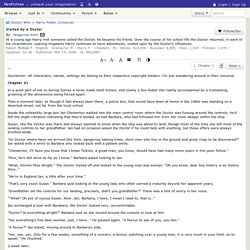 I'm just wandering around in their universe. Chapter 01. Harry Potter: The Dalek Who Lived Chapter 1: The Dalek Asylum, a Doctor Who + Harry Potter Crossover fanfic. Our world is full of stories. 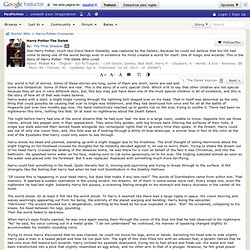 Some of these stories are long, some of them are short, some are sad and some are fantastical. Some of them are real. This is the story of a very special child. Which is'nt to say that other children are not special because they all are in very different days, but, this boy may just have been one of the most special children in all of existence, and this is the story of how all of that was make believe.Harry woke with a start, a slight tingle running through the lightning bolt shaped scar on his head.

That in itself was abnormal as the only thing that could possibly be causing that scar to tingle was Voldemort, and they had destroyed him once and for all at the battle of Hogwarts just over two months ago now. The night before Harry had one of the worst dreams that he had ever had. Harry shook his head and yawned, standing up with a slight stagger due to his tiredness. Harry could feel something in his head. The world shook. The Lonely God, a Sherlock Holmes + Avengers Crossover fanfic.

This hit me upside the head at about 100 mph and refused to let me go until I wrote it out. 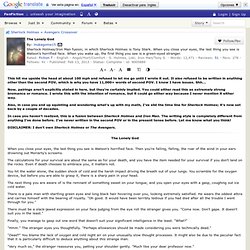 It also refused to be written in anything other than the second POV, which is why you have 11,000+ words of second POV. I know I have issues. Shh... Now, pairings aren't explicitly stated in here, but they're certainly implied. You could either read this as extremely strong bromance or romance. Also, in case you end up squinting and wondering what's up with my math, I've slid the time line for Sherlock Holmes; it's now set back by a couple of decades. Please Take Me Home Chapter 1: Tony Stark, a Sherlock Holmes + Avengers Crossover fanfic. This chapter: Post-avengers, Pre-Iron Man 3 Please Take Me Home Chapter One: Tony Stark Mycroft was having a good day. 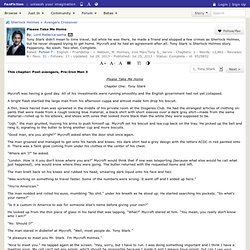 All of his investments were running smoothly and the English government had not yet collapsed. A bright flash startled the large man from his afternoon cuppa and almost made him drop his biscuit. A thin, black haired man was sprawled in the middle of his private room at the Diogenes Club. "Ugh," the man grunted, moving his arms to push himself up. "Good man, are you alright? " The man groaned and managed to get onto his hands and knees. "Where am I? " "London. All This Time Chapter 1, a Sherlock Holmes + Thor Crossover fanfic. It seems that the Tony/Loki disease has finally reached the Vegas area. 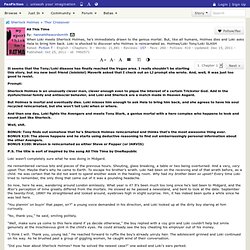 I really shouldn't be starting this story, but my new best friend (lolololol) Maverik asked that I check out an LJ prompt she wrote. And, well, it was just too good to resist. Prompt: Sherlock Holmes is an unusually clever man, clever enough even to pique the interest of a certain Trickster God. Add in the dysfunctional family and antisocial behavior, and Loki and Sherlock are a match made in Heaven Asgard. But Holmes is mortal and eventually dies. And then one day, Loki fights the Avengers and meets Tony Stark, a genius mortal with a hero complex who happens to look and sound just like Sherlock. Well, shit. P.S. Loki wasn't completely sure what he was doing in Midgard. He remembered various bits and pieces of the previous hours.