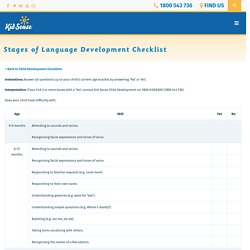 Interpretation: If you tick 2 or more boxes with a ‘Yes’ contact Kid Sense Child Development on 1800 KIDSENSE (1800 543 736). Does your child have difficulty with: This checklist was designed to serve as a functional screening of developmental skills per age group. It does not constitute an assessment nor reflect strictly standardised research. The information in this checklist was compiled over many years from a variety of sources.

PreschoolandKindergartenLanguageChecklist. InformalSpeechandLanguageAssessmentGuide. Self Scoring Rubric (2) Words Their Way – Explorations in Literacy. Since my first year teaching in 2012, we have used Words Their Way to teach spelling. 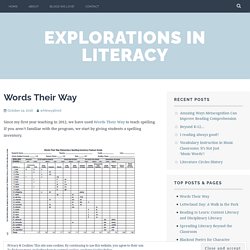 If you aren’t familiar with the program, we start by giving students a spelling inventory. This assessment places them in a spelling stage, and we begin giving them word lists based on their level. We have really improved our practices over the years with the program. We used to give our students different word lists in our own classroom and give a traditional spelling test on their 20 words at the end of the week. Now, we focus a lot more on the sort so they really learn and can apply the pattern. After we give the assessment, we make spelling groups based on the students’ levels.

On the first day of the week, students cut their words for the week into little cards. On Wednesdays, we play games with our word sorts. On Friday, we give the spelling test. We all give the same homework to avoid confusion about assignments. Monday- Word Sort Practice. Tuesday- Rainbow Words. Wednesday- 10 sentences. Child Language Doctoral Program. The University of Kansas prohibits discrimination on the basis of race, color, ethnicity, religion, sex, national origin, age, ancestry, disability, status as a veteran, sexual orientation, marital status, parental status, gender identity, gender expression, and genetic information in the university's programs and activities. 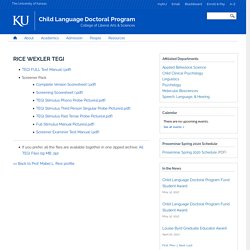 PEARL – A Universal Kindergarten Screener for Dyslexia – Language Dynamics Group. The PEARL is a dyslexia screener that accurately identify future decoding and comprehension difficulty in minutes! 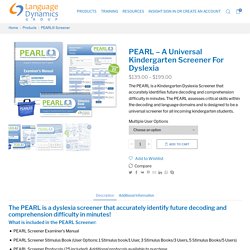 What is included in the PEARL Screener: PEARL Screener Examiner’s ManualPEARL Screener Stimulus Book (User Options: 1 Stimulus book/1 User, 3 Stimulus Books/3 Users, 5 Stimulus Books/5 Users) PEARL Screener Protocols (25 included) Additional protocols available to purchase PEARL Carrying Bag Highlights of the PEARL Screener Only takes 5-15 minutes to administer (in majority of cases)Accurately predicts future decoding and comprehension difficulty with 80% (or higher) sensitivity and specificityReduces cultural and linguistic bias with 80% (or higher) sensitivity and specificityInforms present level of decoding and academically related language abilityThe PEARL can be administered by anyone who can read and understand the test manual and has knowledge of standardized assessment procedures An introduction to the PEARL.

Language Rubrics. Self Scoring Storyboard Rubric. MISL Rubric (2) MISL Scoring Sheet (1) PragmaticScreener. Summary chart for five stages of spelling development NZ. FiveParagraphRubric BY SA. FreeStudentpragmaticsselfassessmentforgroupactivitiessocialskills. Reading Strategies Self Assessment F16. Untitled. Untitled. Downloads — SUGAR Language. Brown's Stages of Syntactic and Morphological Development. Brown's Stages of Syntactic and Morphological Development Details Created: Wednesday, 09 November 2011 08:53 Updated on Thursday, 07 November 2019 17:13 Typical expressive language development "Brown's Stages" were identified by Roger Brown 1925-1997, and described in his classic book (Brown,1973). A structural analysis does not include a measure of a child's development in the area of the clarity of pronunciation of speech sounds. Morphology In Linguistics, morphology is the branch of grammar devoted to the study of the structure or forms of words, primarily through the use of the morpheme construct.

Syntax In Linguistics, syntax is a traditional term for the study the rules governing the combination of words to form sentences. Morpheme A morpheme is a unit of meaning. Happy 'Happy’ is ONE WORD, it has TWO SYLLABLES (ha-ppy), and because it contains only one unit of meaning it is ONE MORPHEME. Stage I Sentence Types Brown's Stage I Brown's Stages ("Brown's Morphemes") I to IV Reference Link.