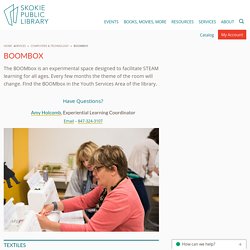 Aligning Common Core in a Makerspace. Creating Makerspaces in Schools. Two weekends ago, I attended EdCamp NYC at The School at Columbia, an independent school on Manhattan's Upper West Side. 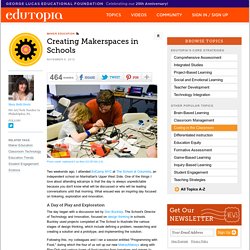 One of the things I love about attending edcamps is that the day is always unpredictable because you don't know what will be discussed or who will be leading conversations until that morning. What ensued was an inspiring day focused on tinkering, exploration and innovation. A Day of Play and Exploration The day began with a discussion led by Don Buckley, The School's Director of Technology and Innovation, focused on design thinking in schools. Makerspaces in Schools: Creating STEAM Connections.

Educators have discovered the power of makerspaces in schools to build students’ competencies and interest in science, technology, engineering and math. 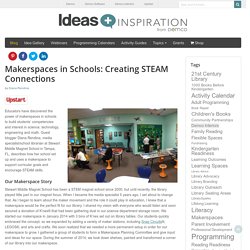 Guest blogger Diana Rendina, media specialist/school librarian at Stewart Middle Magnet School in Tampa, FL, describes how her school set up and uses a makerspace to support curricular goals and encourage STEAM skills. Our Makerspace Story Stewart Middle Magnet School has been a STEM magnet school since 2000, but until recently, the library played little part in our magnet focus. When I became the media specialist 5 years ago, I set about to change that. As I began to learn about the maker movement and the role it could play in education, I knew that a makerspace would be the perfect fit for our library.

Our Makerspace Today Students building on the Epic Lego Wall. Our makerspace consists of an open area that takes up one corner of our library, as well as a storage room. Passive Programs Collaborations with Teachers STEAM Club. Popular 'Maker Movement' Incompatible With Common Core, Authors Contend. The Common Core Meets the Maker Movement. How do maker projects jibe with the requirements of the new Common Core? 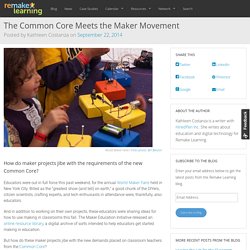 Educators were out in full force this past weekend, for the annual World Maker Faire held in New York City. Billed as the “greatest show (and tell) on earth,” a good chunk of the DIYers, citizen scientists, crafting experts, and tech enthusiasts in attendance were, thankfully, also educators. And in addition to working on their own projects, these educators were sharing ideas for how to use making in classrooms this fall. The Maker Education Initiative released an online resource library, a digital archive of sorts intended to help educators get started making in education.

But how do these maker projects jibe with the new demands placed on classroom teachers from the Common Core? Why the Maker Movement Is Important to America’s Future. I grew up in the age of Tinker Toys and Erector Sets. 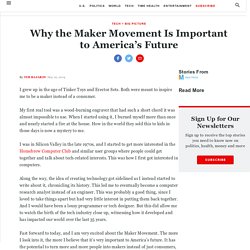 Both were meant to inspire me to be a maker instead of a consumer. My first real tool was a wood-burning engraver that had such a short chord it was almost impossible to use. When I started using it, I burned myself more than once and nearly started a fire at the house. How in the world they sold this to kids in those days is now a mystery to me. I was in Silicon Valley in the late 1970s, and I started to get more interested in the Homebrew Computer Club and similar user groups where people could get together and talk about tech-related interests. Along the way, the idea of creating technology got sidelined as I instead started to write about it, chronicling its history. There's a Maker Faire in That iPad! 10 Ways to Create Student Makers With Apps - Getting Smart by Alison Anderson - edapps, iPad, maker, maker fair, makerchat, makered. Too often the word on the street is “my school or class has new iPads but we don’t know what to do with them.” 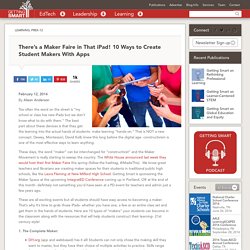 The best part about these devices is that they get the learning into the actual hands of students- make learning “hands-on.” That is NOT a new concept. Dewey, Montessori, David Kolb knew this long before the digital age- constructivism is one of the most effective ways to learn anything. These days, the word “maker” can be interchanged for “constructivist” and the Maker Movement is really starting to sweep the country. The White House announced last week they would host their first Maker Faire this spring (follow the hashtag, #IMadeThis). These are all exciting events but all students should have easy access to becoming a maker. 1. DIY.org (app and webbased) has it all! 2. Play-i Bots: coming soon – these little bots will take the code written on the ipad and make it come to life in the real world. 3. Thing 23: Makerspaces.

“Creating is becoming a new digital competency, and libraries are building and expanding their programs and services to meet these changing community needs.” 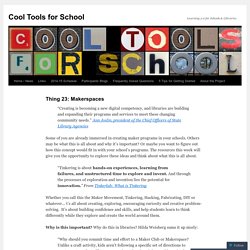 Ann Joslin, president of the Chief Officers of State Library Agencies Some of you are already immersed in creating maker programs in your schools. Others may be what this is all about and why it’s important? Or maybe you want to figure out how this concept would fit in with your school’s programs. The resources this week will give you the opportunity to explore these ideas and think about what this is all about. Apps & More for Makerspaces. Whether your library or school has a dedicated makerspace, you are experimenting with maker and STEM programming, or looking for inspiration to get started, this inaugural installment of “Mix It Up” offers a broad selection of free or low-cost apps, websites, and tools for engaging kids and teens in creative maker projects. 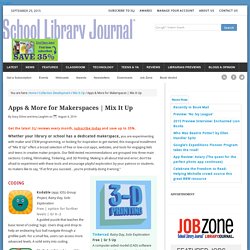 Our field-tested recommendations are grouped into three main sections: Coding, Filmmaking, Tinkering, and 3D Printing. Making is all about trial and error; don’t be afraid to experiment with these tools and encourage playful exploration by your patrons or students. As makers like to say, “If at first you succeed…you’re probably doing it wrong.” 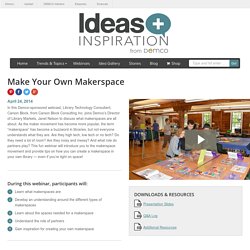 He has been called "a geek who speaks English" and enjoys acting as a bridge between the worlds of librarians and hard-core technologists. He has a passion to de-mystify technology for the uninitiated, and to help IT professionals understand and support the goals of libraries. Creating Makerspaces in Schools. A Librarian's Guide to Makerspaces: 16 Resources. Makerspaces, sometimes also referred to as hackerspaces, hackspaces, and fablabs are creative, DIY spaces where people can gather to create, invent, and learn.

In libraries they often have 3D printers, software, electronics, craft and hardware supplies and tools, and more. Here are some excellent resources for anyone thinking about setting up a makerspace in their organization. Articles & Blog Posts Libraries, Hackspaces and E-waste: how libraries can be the hub of a young maker revolution “…there’s another gang of information-literate people out there, a gang who are a natural ally of libraries and librarians: the maker movement.

Clustered in co-operative workshops called “makerspaces” or “hack(er)spaces,” makers build physical stuff. What is a Makerspace? From Stacks to Hacks: Makerspaces and LibraryBox The makerspace movement is gaining momentum in the library world. Events Maker Faire Events The Maker Faire is a festival of invention and celebration of the Maker movement. Eli7095.pdf.