Pinterest: Games and Learning. Four Inventive Games That Show Us the Future of Learning. By Tanner Higgin, Graphite I think of contemporary art as a kind of futurism. 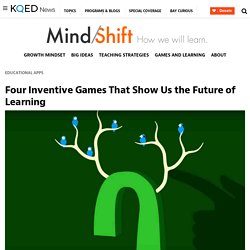 Artists tinker away in their studios like engineers, making challenging (often weird) things that reframe what’s possible. In the process, they pioneer new ideas and technologies that sometimes get realized on a mass scale years later. Look no further than Drake’s “Hotline Bling,” which borrowed heavily from James Turrell’s work, or Kit Galloway and Sherrie Rabinowitz’s “Hole in Space,” which staged a New York to Los Angeles Skype-like video chat in 1980. Art is nothing if not ahead of its time. As contemporary artists, game designers can show us what’s to come. We’re now seeing some of these artists experimenting in the learning space, and it’s time we started listening to what they have to say. Earth Primer Designed by Chaim Gingold, a Ph.D. student at UC Santa Cruz, indie developer and designer of Spore’s creature creator, “Earth Primer” is a reinvention of the textbook. Metamorphabet Extrasolar Twine. Classcraft – Make learning an adventure. 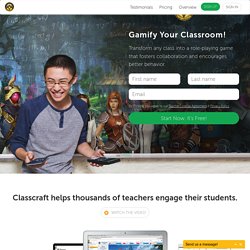 My class immediately changed behaviorally and academically after implementing it in my courses.“ — Roy Rodriguez, Public Speaking, Theatre & Debate, Grades 9-12, College Station, Texas. The MindShift Guide to Digital Games and Learning. Some Struggles Teachers Face Using Games in the Classroom Lack of time and administrative support are just some of the obstacles to using games in the classroom. 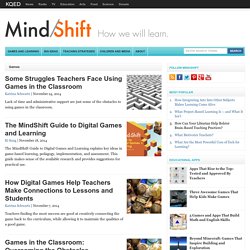 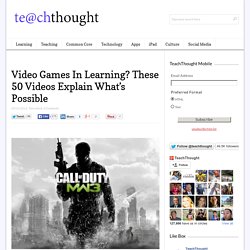 Board games, video games, even active outdoor games all have an important place in education, and these videos share more about their role in learning. Check out our list of 50 awesome videos for gaming teachers to discover what experts, teachers, and even students have to say about using games for education. The 23 Best Game-Based Education Resources for 2014. Edudemic has covered game-based learning and gamification in the classroom on numerous occasions in the past. 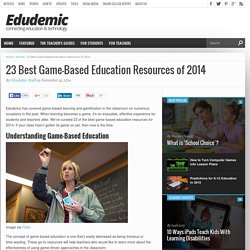 When learning becomes a game, it’s an enjoyable, effective experience for students and teachers alike. We’ve curated 23 of the best game-based education resources for 2014. If your class hasn’t gotten its game on yet, then now is the time. Understanding Game-Based Education Image via Flickr The concept of game-based education is one that’s easily dismissed as being frivolous or time-wasting. The Institute of Play explains how games nurture the higher-order thinking skills kids will need in their futures, including the ability to analyze and solve problems using media resources.

Resources for Getting Started Even if you’re sold on the idea of game-based learning, you might be at a loss on where to begin. Tools You Can Use Once you’ve developed an understanding of game-based learning and decided how to get started, it’s time to move forward with deciding on the games you want to use. Journalism and video games come together as a new form of storytelling in Brazil. Picture this: In order to understand how the mafia works, you take on the role of an undercover cop posing as a globe-trotting drug trafficker. 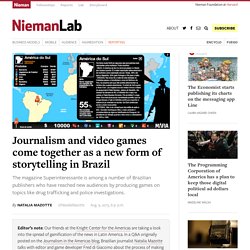 You answer questions about sex education to continue a strip tease performed by a model. To better understand the teachings of major philosophers, you engage in a battle of theories with them. Though it may sound like a joke, video games are gaining traction as a new way to deliver information on news and current events. Newsgames are a relatively new format for storytelling, spanning the divide between reporting and video games, and gaining more credibility in the journalism world. Media outlets like The New York Times, CNN and El Pais have experimented with stories where readers become players in a simulated world.

One of those responsible for its success is Fred di Giacomo, who until July of this year was Núcleo Jovem’s editor and is now pursuing an independent career. Fred di Giacomo: I worked seven and half years at Abril.