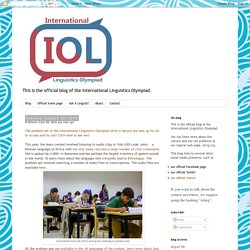 The problem set of the International Linguistics Olympiad 2016 in Mysore are now up for all to access and try out! Click here to see 'em! This year, the team contest involved listening to audio clips in ! Xóõ (ISO-code: nmn) – a Khoisan language of Africa with not only tones, but also a large number of click consonants. Laurence Anthony's Software. FireAnt (Filter, Identify, Report, and Export Analysis Toolkit) is a freeware social media and data analysis toolkit with built-in visualization tools including time-series, geo-position (map), and network (graph) plotting. 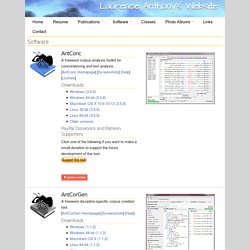 [FireAnt Homepage] [Screenshots] [Help] PayPal Donations and Patreon Supporters: Click one of the following if you want to make a small donation to support the future development of this tool. ABCD Wordie Analyzes Text and Creates Vocabulary Lists. BlaBlaMeter - Bullshit detection tool. What is the value of languages in the UK? — Cambridge Language Sciences. The role and contribution of language to the UK economy and society is both rich and varied. 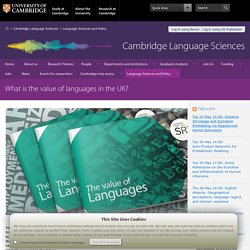 It stretches from enabling economic growth and prosperity through the language and communication skills required to enable UK business to participate in the global market place; to the ‘soft power’ and diplomatic skills through which the UK’s role and authority in foreign policy is manifested; to enhancing the cultural capital, educational attainment and social cohesion within England and the devolved communities of the UK both now and in the future. A new report by Cambridge Public Policy draws on discussions held at a workshop in Cambridge in October 2015 to discuss strategic issues in which languages play a part: national security, diplomacy and conflict resolution, community and social cohesion, migration and identity. Jęz.polski. IPA Online - Newcastle University. These resources have been designed to provide a range of materials to support students who are studying practical phonetics on programmes in Linguistics and Speech and Language Pathology. 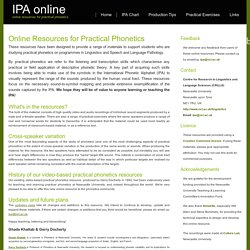 By practical phonetics we refer to the listening and transcription skills which characterise any practical or field application of descriptive phonetic theory. A key part of acquiring such skills involves being able to make use of the symbols in the International Phonetic Alphabet (IPA) to visually represent the range of the sounds produced by the human vocal tract. These resources focus on the necessary sound-to-symbol mapping and provide extensive exemplification of the sounds captured by the IPA. We hope they will be of value to anyone learning or teaching the IPA! What's in the resources? International Phonetic Alphabet Sounds. データベース・データ集. Campus-electronique.tm. 東京言語研究所 - 理論言語学講座 セミナーなど、ことばに関心のある方へ. Magic Search: multiple dictionary lookup. Compleat Lexical Tutor. Documentation. 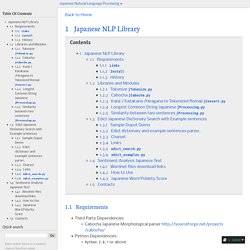 Or download from our account at Dropbox The Proto-Indo-European Etymology (8.41 Mb), which offers derivatives and relatives of the reconstructed PIE words in the different branches. Linguistic Evolution. Languages & Linguistics. Linguistics. Find the Meanings and Definitions of Words at Dictionary.com.

Linguistics. Semiotics for Beginners by Daniel Chandler. Semiotics. Is your Brand using the right Symbols? 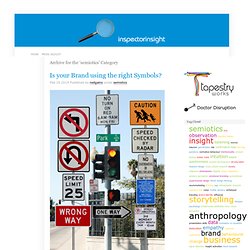 Our world is full of symbols, and we are all surrounded by symbols and signs every hour of every day. Our brains constantly use signs and symbols to access mental shortcuts. These shortcuts allow us to simplify and manage the world in all its complexity. Cognitive Linguistics. Neurolinguistics: Language and biology. Neurolinguistics: Language and biology Central Nervous System Peripheral Nervous System basic cellular unit (chemical transmission, neurotransmitters dopamine, serotonin, acetylcholine) 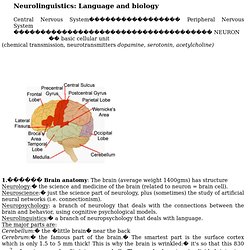 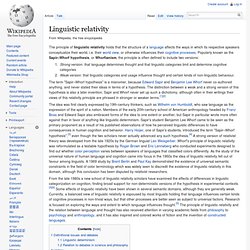 LANGUAGES ON THE WEB - THE ONE AND ONLY WEB SITE TO LEARN FOREIGN LANGUAGES ONLINE. Language electives pathway : Modern languages electives : ... : Sussex Centre for Language Studies. Language pathways are open to undergraduates studying for a single honours degree course. 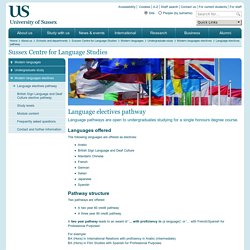 Languages offered The following languages are offered as electives: Language resources. Language Files: Materials for an Introduction to Language and Linguistics, 11th Edition (9780814251799): Vedrana Mihalicek, Christin Wilson: Books. Corpora. Symbols, Signs, Metaphors and Meanings. “Culture is the collective programming of the mind.” - Geert Hofstede A world of symbols What makes us all so interesting to researchers and marketers is our enquiring mind, and nothing shows this more vividly than the web of beliefs and ideas that we have created to make meaning from the complexity of the world around us.

A very important part of this framework is the vocabulary of signs and symbols that help remind us of our link to the world and each other. Signs are quite straightforward in their function of providing a visual language to help us understand the dangers ahead on the road, the feelings of a friend or the key benefits of a brand (signs are mainly but not always visual and may also be communicated through other senses). Symbols are more complex as they may represent a more abstract idea. Zoltán Dörnyei’s Personal Website.