The History of Softball

History. Softball was invented inside the Farragut Boat Club on a blustery, winter day in November, 1887, in Chicago, IL. 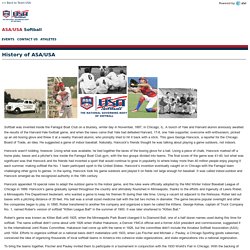 A bunch of Yale and Harvard alumni anxiously awaited the results of the Harvard-Yale football game, and when the news came that Yale had defeated Harvard, 17-8, one Yale supporter, overcome with enthusiasm, picked up an old boxing glove and threw it at a nearby Harvard alumni, who promptly tried to hit it back with a stick. This gave George Hancock, a reporter for the Chicago Board of Trade, an idea.

He suggested a game of indoor baseball. Naturally, Hancock's friends thought he was talking about playing a game outdoors, not indoors. Hancock wasn't kidding, however. Hancock appended 19 special rules to adapt the outdoor game to the indoor game, and the rules were officially adopted by the Mid Winter Indoor Baseball League of Chicago in 1889. "The promotional activities of the ASA played an important part in stimulating the interest that has been developing for many years. 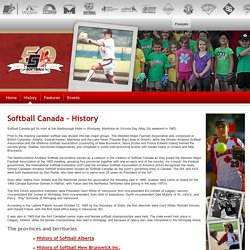 Prior to the meeting Canadian softball was divided into two major groups. The Western Major Fastball Association was composed of British Columbia, Alberta, Saskatchewan, Manitoba and the Lake Head (Thunder Bay) area of Ontario, while the Ontario Amateur Softball Association and the Maritime Softball Association (consisting of New Brunswick, Nova Scotia and Prince Edward Island) formed the second group. Quebec functioned independently and competed in some inter-provincial events with border towns in Ontario and New Brunswick. History of Softball Saskatchewan - Softball Canada. Softball Saskatchewan – The Beginning As softball sped across the province, it became clear that a provincial body was needed, to standardize rules and organize and supervise province-wide competition. 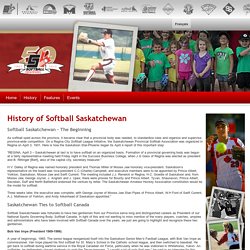 On a Regina City Softball League initiative, the Saskatchewan Provincial Softball Association was organized in Regina on April 3, 1931. Here is how the Saskatoon Star-Phoenix began its April 4 report of this important step: “REGINA, April 3 – Saskatchewan at last is to have softball on an organized basis. Formation of a provincial governing body was begun at a fairly representative meeting held Friday night in the Success Business College, when J.G Gass of Regina was elected as president and B.

H.V. Three weeks later, the executive was complete, with George Joyner of Moose Jaw Stan Pipes of Prince Albert, W.H Ford of Swift Current, A.J. Saskatchewan Ties to Softball Canada Bob Van Impe (President 1969-1986) The History Of Softball. Who Invented Softball? Although many people assume that softball was derived from baseball, the sport’s first game actually came about because of a football game. 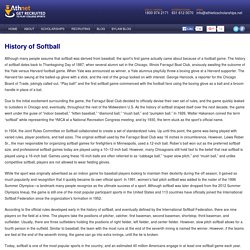 History of Softball. The game that started in Chicago and Milwaukee became very popular and spread through the upper Midwest and Canada. 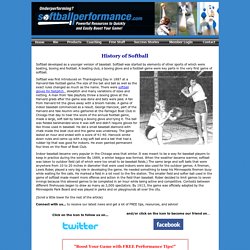 The first softball league outside the United States was organized in Toronto in 1897. The game had many different names. It was known as a different game (popular names were cabbage ball, mush ball, or pumpkin ball,) depending on the area in which it was being played. History of Softball. Softball is often referred to as baseball for girls, with a larger ball and a smaller diamond. 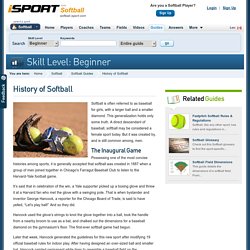 This generalization holds only some truth. A direct descendant of baseball, softball may be considered a female sport today. But it was created by, and is still common among, men. The Inaugural Game Possessing one of the most concise histories among sports, it is generally accepted that softball was created in 1887 when a group of men joined together in Chicago's Farragut Baseball Club to listen to the Harvard-Yale football game. It’s said that in celebration of the win, a Yale supporter picked up a boxing glove and threw it at a Harvard fan who met the glove with a swinging pole.

Hancock used the glove’s strings to knot the glove together into a ball, took the handle from a nearby broom to use as a bat, and chalked out the dimensions for a baseball diamond on the gymnasium's floor. The prevalence of indoor baseball spread rapidly until 1889, when Chicago teams brought the sport outdoors. International Softball Federation - The ISF. Related Link: Historical Timeline for the ISF The sport that we know today as 'softball' is said to have begun - indoors, actually - in 1887 on Thanksgiving Day in Chicago. 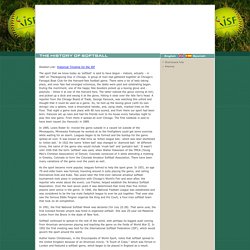 A group of men had gathered together at Chicago's Farragut Boat Club for the Harvard-Yale football game. There were a lot of bets taking place, and once Yale had emerged victorious, the debts were paid and celebrating began.