Olmec Facts, information, pictures. The Olmec Civilization and the Use of Bitumen. Geoarchaeological research has identified origin sources of bitumen used by the great Olmec civilization of the tropical lowlands of central America, 3000 years ago. 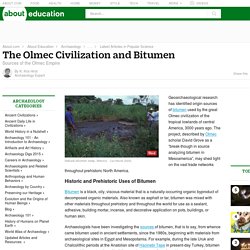 The project, described by Olmec scholar David Grove as a “break-though in source analyzing bitumen in Mesoamerica”, may shed light on the vast trade networks throughout prehistoric North America. Historic and Prehistoric Uses of Bitumen Bitumen is a black, oily, viscous material that is a naturally-occurring organic byproduct of decomposed organic materials. Also known as asphalt or tar, bitumen was mixed with other materials throughout prehistory and throughout the world for use as a sealant, adhesive, building mortar, incense, and decorative application on pots, buildings, or human skin. The Enigma of the Olmecs - Softpedia. San Lorenzo - Olmec Civilization in Veracruz.

San Lorenzo is an Olmec period site located in the state of Veracruz, Mexico. 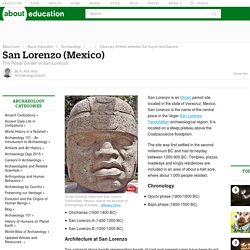 San Lorenzo is the name of the central place in the larger San Lorenzo Tenochtitlan archaeological region. It is located on a steep plateau above the Coatzacoalcos floodplain. The site was first settled in the second millennium BC and had its heyday between 1200-900 BC. Temples, plazas, roadways and kingly residences are included in an area of about a half acre, where about 1,000 people resided. Chronology Ojochi phase (1800-1600 BC)Bajio phase (1600-1500 BC)Chicharras (1500-1400 BC)San Lorenzo A (1400-1200 BC)San Lorenzo B (1000-1200 BC) Architecture at San Lorenzo Ten colossal stone heads representing heads of past and present rulers have been found at San Lorenzo. The New York Times > Science > Mother Culture, or Only a Sister? Published: March 15, 2005 n a coastal flood plain etched by rivers flowing through swamps and alongside fields of maize and beans, the people archaeologists call the Olmecs lived in a society of emergent complexity. 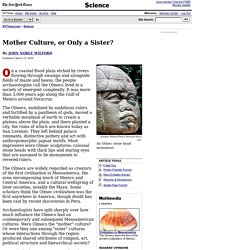 It was more than 3,000 years ago along the Gulf of Mexico around Veracruz. The Olmecs, mobilized by ambitious rulers and fortified by a pantheon of gods, moved a veritable mountain of earth to create a plateau above the plain, and there planted a city, the ruins of which are known today as San Lorenzo. They left behind palace remnants, distinctive pottery and art with anthropomorphic jaguar motifs. Most impressive were Olmec sculptures: colossal stone heads with thick lips and staring eyes that are assumed to be monuments to revered rulers. Ancient City Found in Mexico; Shows Olmec Influence. Two statues and architectural details at the site indicate that the inhabitants of Zazacatla adopted Olmec styles when they changed from a simple, egalitarian society to a more complex, hierarchical one, archaeologist Giselle Canto told the Associated Press. 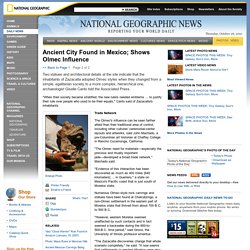 "When their society became stratified, the new rulers needed emblems … to justify their rule over people who used to be their equals," Canto said of Zazacatla's inhabitants. Trade Network The Olmec's influence can be seen farther afield than their traditional area of control, including other cultures' ceremonial-center layouts and artworks, said John Machado, a pre-Columbian art historian at Chaffey College in Rancho Cucamonga, California. 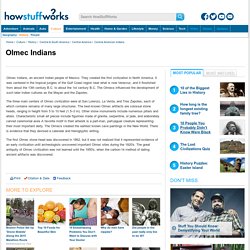 They created the first civilization in North America. It was centered in the tropical jungles of the Gulf Coast region near what is now Veracruz, and it flourished from about the 13th century B.C. to about the 1st century B.C. Olmec Civilization - Timeline and Definition. People. Olmec, the first elaborate pre-Columbian civilization of Mesoamerica (c. 1200–400 bce) and one that is thought to have set many of the fundamental patterns evinced by later American Indian cultures of Mexico and Central America, notably the Maya and the Aztec. 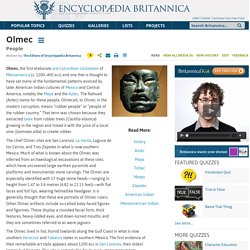 The Nahuatl (Aztec) name for these people, Olmecatl, or Olmec in the modern corruption, means “rubber people” or “people of the rubber country.” That term was chosen because they extracted latex from rubber trees (Castilla elastica) growing in the region and mixed it with the juice of a local vine (Ipomoea alba) to create rubber. The chief Olmec sites are San Lorenzo, La Venta, Laguna de los Cerros, and Tres Zapotes in what is now southern Mexico. Much of what is known about the Olmec was inferred from archaeological excavations at these sites, which have uncovered large earthen pyramids and platforms and monumental stone carvings. Olmec stylistic influence disappeared after about 400 bce. Oldest Writing in New World Discovered, Scientists Say.

September 14, 2006 A writing system lost for 3,000 years has been rediscovered on an ancient stone tablet in Mexico, archaeologists say (map of Mexico). 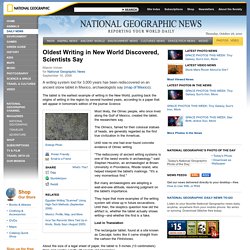 The Olmec: Precusors to Mesoamerican History. The Olmec, which translated via the Aztecs, means “rubber people”, were the inspiration behind the other four great main Mesoamerican civilizations namely the Toltec, the Aztecs, the Maya and the Inca, with a decided leaning toward the Maya, who may have been an outgrowth of the Olmec for reasons s we shall explore. 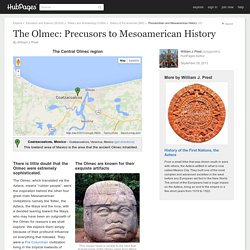 We explore them simply because of their profound influence on everything that followed. They were a Pre-Columbian civilization living in the tropical lowlands of south-central Mexico, near the modern-day cities of Veracruz and Tabasco close to the coast before it turns east in the Yucatan peninsula. The Olmec flourished during Mesoamerica's formative period, dating approximately from as early as 1500 BCE to about 400 BCE. The ancient Olmec Civilization. The ancient Olmec civilization is now considered to be one of the earliest great civilizations in Mesoamerica. 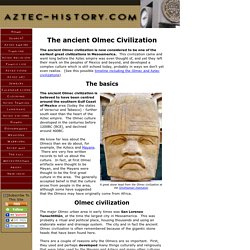 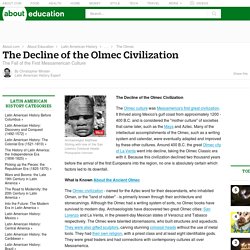 It thrived along Mexico's gulf coast from approximately 1200 - 400 B.C. and is considered the "mother culture" of societies that came later, such as the Maya and Aztec. Ancient Olmec Trade and Economy. Ancient Olmec Trade and Economy: The Olmec culture thrived in the humid lowlands of Mexico's gulf coast from about 1200-400 B.C. They were great artists and talented engineers who had a complex religion and worldview. Although much information about the Olmecs has been lost to time, archaeologists have succeeded in learning much about their culture from several excavations in and around the Olmec homeland. History and Details on Olmec Art and Sculpture. Olmec Art and Sculpture: The Olmec culture was the first great Mesoamerican civilization, developing along Mexico's gulf coast from about 1200-400 B.C. before going into a mysterious decline. The Olmec were very talented artists and sculptors who are today best remembered for their monumental stonework and cave paintings.

Although relatively few pieces of Olmec art survive today, they are quite striking and show that, artistically speaking, the Olmec were far ahead of their time. The massive colossal heads found at four Olmec sites are a good example. Most surviving Olmec art seems to have had a religious or political significance, i.e. the pieces show gods or rulers. The Gods of the Olmec.

The Gods of the Olmec The mysterious Olmec Civilization flourished between roughly 1200 and 400 B.C. on Mexico's gulf coast. Although there are still more mysteries than answers about this ancient culture, modern researchers have determined that religion was of great importance to the Olmec. Several supernatural beings appear and re-appear in the few examples of Olmec art that survive today. This has led archaeologists and ethnographers to tentatively identify a handful of Olmec gods. 10 Facts About the Ancient Olmec in Mesoamerica. 9. They were extremely influential.