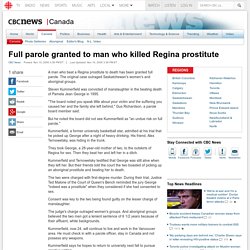 The original case outraged Saskatchewan's women's and aboriginal groups. Steven Kummerfield was convicted of manslaughter in the beating death of Pamela Jean George in 1995. "The board noted you speak little about your victim and the suffering you caused her and the family she left behind," Gus Richardson, a parole board member said. But he noted the board did not see Kummerfield as "an undue risk on full parole. " Kummerfield, a former university basketball star, admitted at his trial that he picked up George after a night of heavy drinking. They took George, a 28-year-old mother of two, to the outskirts of Regina for sex. Kummerfield and Ternowetsky testified that George was still alive when they left her. The two were charged with first-degree murder. Update on the Pamela Jean George Case – National Association of Women and the Law. 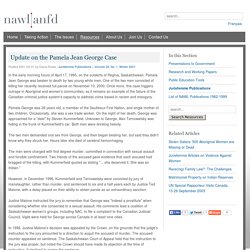 One of the two men convicted of killing her recently received full parole on November 10, 2000. Once more, this case triggers outrage in Aboriginal and women's communities, as it remains an example of the failure of the Canadian criminal justice system's capacity to address crime based in racism and misogyny. Aboriginal Justice, Pamela George Case. Saskatchewan Justice On Trial: The Pamela George Case Albert Angus SASKATCHEWAN INDIAN APRIL 1997 v27 n01 p05. 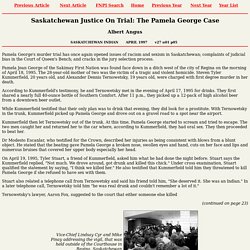 Watch the Film - Highway of Tears. "Highway of Tears" is about the missing or murdered women along a 724 kilometer stretch of highway in northern British Columbia. 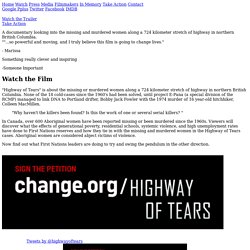 None of the 18 cold-cases since the 1960's had been solved, until project E-Pana (a special division of the RCMP) managed to link DNA to Portland drifter, Bobby Jack Fowler with the 1974 murder of 16 year-old hitchhiker, Colleen MacMillen. "Why haven't the killers been found? Is this the work of one or several serial killers?

" In Canada, over 600 Aboriginal women have been reported missing or been murdered since the 1960s. Now find out what First Nations leaders are doing to try and swing the pendulum in the other direction. Four things to know about Highway of Tears scandal, and the documents B.C. government allegedly deleted. It’s a scandal that has the potential to rock Christy Clark’s supremacy in B.C. 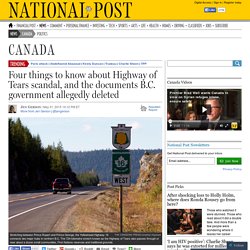 A former legislative staffer claims the Liberal government routinely circumvents Freedom of Information laws by deleting sensitive documents and emails. When Tim Duncan questioned the practice, he said he was told: “It’s like in the West Wing. You do whatever it takes to win.” Duncan, who used to work for the province’s Transportation Minister, Todd Stone, came forward last week. In a letter to the province’s privacy commissioner, he claims his colleagues deleted emails pertaining to the infamous Highway of Tears. What’s the Highway of Tears? Stretching between Prince Rupert and Prince George, the Yellowhead Highway 16 connects two major hubs in northern B.C. Has anything been done about it?

Posters and pamphlets warn hitchhikers — girls especially —from hitchhiking. So what happened with Tim Duncan? Highway Of Tears: Pictures, Videos, Breaking News. B.C. government ‘triple deleted’ e-mails related to the Highway of Tears. What does the British Columbia government have to hide about the Highway of Tears? 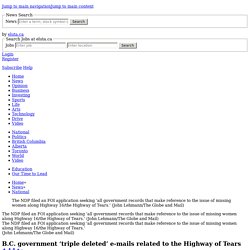 That question was left hanging last week when Elizabeth Denham, the Information and Privacy Commissioner for the province, issued a scathing report that found the government had “triple deleted” e-mails related to the topic. Ms. Denham found the government had violated the Freedom of Information and Protection of Privacy Act by deleting files, and asked the RCMP to investigate one official for his “failure to tell the truth under oath.” On the weekend, Premier Christy Clark called on government ministers and political staff to stop deleting e-mails, and promised to make the changes recommended in Ms. Denham’s report. Who triggered the investigation? In May, Ms. Mr. What motivated the complaint?

Mr. Who filed the FOI application that Mr. Why did the NDP suspect there were such government records? Canada's Highway of Tears and the Women We Forgot. Highway Of Tears Victims List. VANCOUVER - A list of the 18 women and girls whose deaths and disappearances are part of the RCMP's investigation of the Highway of Tears in British Columbia. 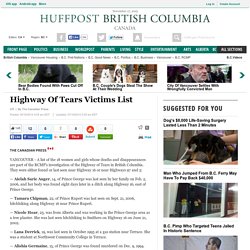