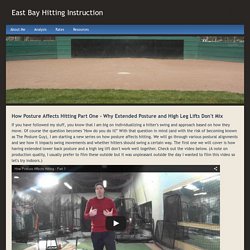 Of course the question becomes "How do you do it? " With that question in mind (and with the risk of becoming known as The Posture Guy), I am starting a new series on how posture affects hitting. We will go through various postural alignments and see how it impacts swing movements and whether hitters should swing a certain way. The first one we will cover is how having extended lower back posture and a high leg lift don't work well together. Check out the video below. For reference, here is someone I would be nervous implementing a high leg lift gather. Photo credit: compare this to a couple guys who do a leg lift correctly. Swing Plane Part One - East Bay Hitting Instruction. This is the first of what I believe will be a three-part series on the swing plane. 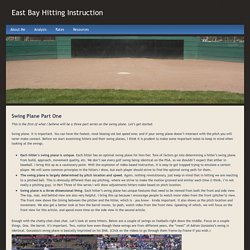 Let’s get started. Swing plane. It is important. You can have the fastest, most blazing-est bat speed ever, and if your swing plane doesn’t intersect with the pitch you will never make contact. Before we start examining hitters and their swing planes, l think it is prudent to make some important notes to keep in mind when looking at the swings.

Alright, allow me to describe Gonzalez’s barrel path. Let’s highlight a couple frames just a few clicks apart in the swing. Now Gonzalez two frames before contact. Watch the video again to see Gonzalez’s movements. Contact deserves some special attention. Pareto Optimal - East Bay Hitting Instruction. You may not know this, but my background is in engineering. 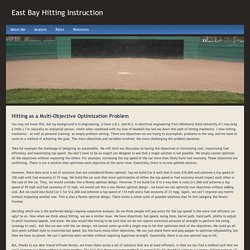 (I have a B.S. and M.S. in electrical engineering from Oklahoma State University if I may brag a little.) I’m naturally an analytical person, which when combined with my love of baseball has led me down this path of hitting mechanics. I view hitting mechanics – as well as personal training- as simply problem solving. There are objectives we are trying to accomplish, problems in the way, and we have to come to a method of achieving the goal. The more objectives and variables involved, the more challenging the problem becomes. GIFs & Pics. Skip navigation Current Section GIFs & Pics. 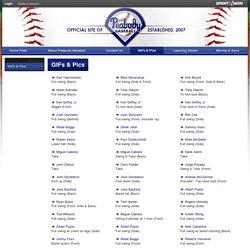 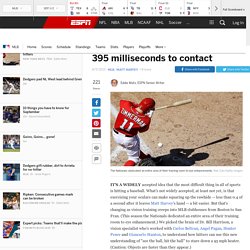 He's been writing for ESPN since 2002, and is a graduate of the University of Pennsylvania. IT'S A WIDELY accepted idea that the most difficult thing in all of sports is hitting a baseball. What's not widely accepted, at least not yet, is that exercising your oculars can make squaring up the rawhide -- less than 0.4 of a second after it leaves Matt Harvey's hand -- a bit easier. But that's changing as vision training creeps into MLB clubhouses from Boston to San Fran. (This season the Nationals dedicated an entire area of their training room to eye enhancement.) The new science of "see the ball" Fire up your foveae Analyze pitch paths all you want, but if a batter can't tell what is coming until the ball is halfway home, he's too late. Best 10 Hitters in Pro Softball Over the Past 5 Years. Hitting - Mike Candrea. Mike Trout Swing Analysis. Rips and Reps: A Drill That Works All Angles.

From GameChanger and Tom Robinson, a freelance reporter for Red Line Editorial, Inc. 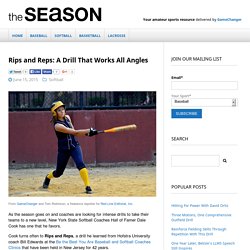 As the season goes on and coaches are looking for intense drills to take their teams to a new level, New York State Softball Coaches Hall of Famer Dale Cook has one that he favors. Cook turns often to Rips and Reps, a drill he learned from Hofstra University coach Bill Edwards at the Be the Best You Are Baseball and Softball Coaches Clinics that have been held in New Jersey for 42 years. Cook has been president of the Conklin Raiders, a girls’ travel softball team with five finishes in the national top 16, since 1989. He currently coaches the Raiders U-18 team and has also coached the Susquehanna Valley Sabers to five New York state high school titles. ● What It's All AboutRips and Reps pairs two players together as a batter and base runner to work on situational hitting and running, but Cook likes the drill because it also keeps defensive players involved.

Cook often starts the runner at first base. Coach Lisle Hitting. After the hitter has taken their stride their foot should land like a normal walking step. 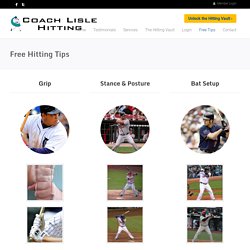 Not on their toes. As the front heel drops; “SINK” down into the back half of feet and into your legs. Albert Pujols says, “Should feel like there are 25 lb weights in your pockets and sit”. Ted Williams used to say that, “should feel like wet concrete” Their front foot should land at a 45 degree angle or more closed position. We want to make sure that the hands are even or behind the back elbow. We should see the knob of the bat pointing in the direction of the catcher and the barrel of the bat should be in front of the head or over it or over the shoulder, with very minimal wrapping behind the head.

Very importantly, we want to see that the front arm creates an L with the front elbow, shoulders and hands and maintain that L for as long as possible.