Journalists must build a personal brand: 10 tips. This post was inspired by one written by Joe Grimm, the longtime journalism jobs adviser. 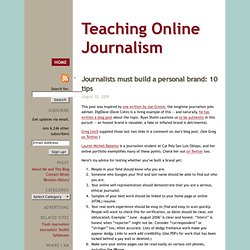 DigiDave (Dave Cohn) is a living example of this — and naturally, he has written a blog post about the topic. It is NOT personal branding – it’s Just living your life online. If you're new here, you may want to subscribe to my RSS feed. 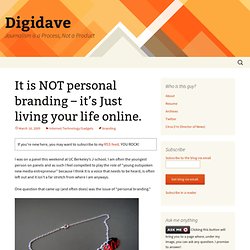 YOU ROCK! I was on a panel this weekend at UC Berkeley’s J-school. I am often the youngest person on panels and as such I feel compelled to play the role of “young outspoken new media entrepreneur” because I think it is a voice that needs to be heard, is often left out and it isn’t a far stretch from where I am anyways. One question that came up (and often does) was the issue of “personal branding.” Twitter tips for journalists. Twitter tips for journalists July 9, 2009 by Steve Buttry Update: These tips are more than two years old. 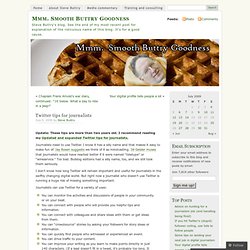 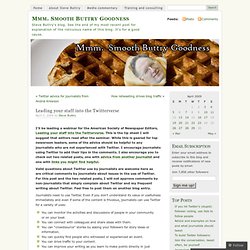 This is the tip sheet I will suggest that editors read after the seminar. Resources for journalists using Twitter. March 3, 2010 by Steve Buttry Journalism professor Julie Posetti has compiled a helpful analysis of the use of Twitter by political journalists in Australia, The #Spill Effect: Twitter Hashtags and Australian Political Journalism. 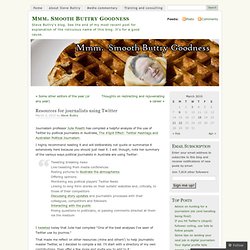 I highly recommend reading it and will deliberately not quote or summarize it extensively here because you should just read it. I will. though, note her summary of the various ways political journalists in Australia are using Twitter: Tweeting breaking news Live-tweeting from media conferences Posting pictures to illustrate the atmospherics Offering opinions Monitoring key political players’ Twitter feeds Linking to long-form stories on their outlets’ websites and, critically, to those of their competitorsDiscussing story updates and journalistic processes with their colleagues, competitors and followersInteracting with the public Posing questions to politicians, or passing comments directed at them via the medium. Engagement in reporting. HOW TO: Make the Most of Your Twitter Profile Page. Whether you're new to Twitter or are a veteran Tweeter, chances are you give more thought to the content of your Tweets than your profile page. 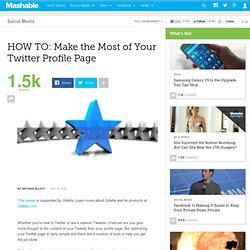 But optimizing your Twitter page is fairly simple and there are a number of tools to help you get the job done. We've showed you how to create a better profile picture and how to organize your Twitter account, and now we're going to show you how to make the most of your Twitter profile page. Add your own favorite tips and tools in the comments. Tips on crowdsourcing news, feature and investigative stories. I’ll be leading a crowdsourcing workshop this afternoon at the Register Citizen in Torrington, Conn., the first of 18 Journal Register Co. newsrooms I will be visiting in June and July. 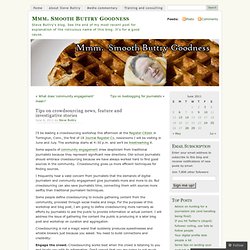 The workshop starts at 4:30 p.m. and we’ll be livestreaming it. Some aspects of community engagement draw skepticism from traditional journalists because they represent significant new directions. Old-school journalists should embrace crowdsourcing because we have always worked hard to find good sources in the community. Crowdsourcing gives us more efficient techniques for finding sources. Doing journalism in 2010 is an act of community organizing. Nothing frustrates me more than watching journalists who’ve lost their newsroom jobs entering the blogosphere… with no clue as to what they should be doing online. 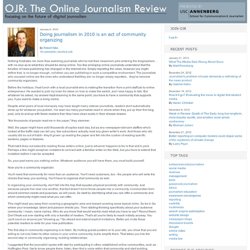 Too few emerging online journalists understand that the function of news publishing has changed in the Internet era. Simply reporting the news, however you might define that, is no longer enough, not when you are publishing in such a competitive environment. The journalists who succeed online are the ones who understand that they are no longer simply reporters… they’ve become community organizers. Before the holidays, I had lunch with a local journalist who is making the transition from a print staff job to online entrepreneur.

He wanted to pick my brain for ideas on how to make the switch, and I was happy to talk. Despite what years of local monopoly may have taught many veteran journalists, readers don’t automatically show up for whatever you publish. “But thousands of people read me in the paper,” they stammer. Mayer Engagement Intro.pdf. What does ‘community engagement’ mean? When you tell the family you have a new job, the initial response, of course, is to congratulate you. 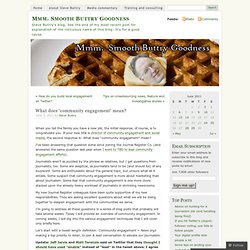 If your new title is director of community engagement and social media, the second response is: What does “community engagement” mean? I’ve been answering that question some since joining the Journal Register Co. (and answered the same question last year when I went to TBD to lead community engagement efforts). Journalists aren’t as puzzled by the phrase as relatives, but I get questions from journalists, too. S Social Media Guide for Journalists. Navigating the journalistic seas this past year has been a particularly challenging/exciting task. 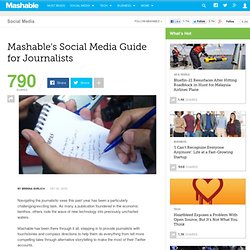 As many a publication foundered in the economic benthos, others rode the wave of new technology into previously uncharted waters. Steve buttry, Director of community engagement & social media at Digital first media.