Lies, deceit and bad driving in 'The Great Gatsby' Transcript MICHAEL CATHCARTLet's move on and look at some of the other characters. 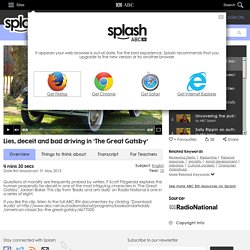 One of the most enigmatic characters in the book is Jordan Baker. So, Jordan Baker is a new kind of woman. She is a woman made possible, really, by the '20s, she's a golf champion, and she's also a liar and a cheat. Jane Gleeson-White, what do you make of Jordan? Is the Great Gatsby 'tilting at windmills'? Overview Date first broadcast: 31 May 2013 Intertextuality is about the process of making connections, either consciously or subconsciously, and can shape the way we interpret a text. 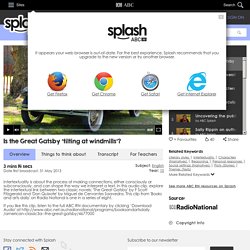 In this audio clip, explore the intertextual link between two classic novels: 'The Great Gatsby' by F Scott Fitzgerald and 'Don Quixote' by Miguel de Cervantes Saavedra. This clip from 'Books and arts daily' on Radio National is one in a series of eight. If you like this clip, listen to the full ABC RN documentary by clicking ‘Download Audio' at. Tragic love triangle in 'The Great Gatsby' Overview Date first broadcast: 31 May 2013 Who will Daisy Buchanan choose when she finds herself torn between the love of two men in F Scott Fitzgerald's 1925 classic novel, 'The Great Gatsby'? 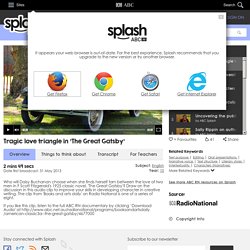 Draw on the discussion in this audio clip to improve your skills in developing character in creative writing. The clip from 'Books and arts daily' on Radio National is one of a series of eight. If you like this clip, listen to the full ABC RN documentary by clicking ‘Download Audio' at Transcript MICHAEL CATHCARTWhy do you think Daisy stays, Jane? 'The Great Gatsby' and all that jazz. Transcript MICHAEL CATHCARTWell, 1925 was the year that young American author F Scott Fitzgerald published what was to become his classic novel, or one of them, The Great Gatsby. 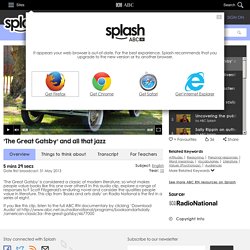 He set his story in the exclusive world of the upper-class Long Islanders. You've got Tom and Daisy Buchanan, and the immensely wealthy and mysterious bachelor, Jay Gatsby. Gatsby is still in love with Daisy, who is his former sweetheart, and he's come back to win her affections with his new-found wealth. 'The Great Gatsby': dream or nightmare? - English (10) Transcript MICHAEL CATHCARTJane, if Scott's reading is right, then surely Gatsby is a hollow man. 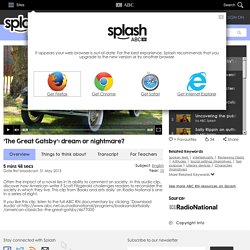 Because he's pursuing her for a very trivial and ultimately egotistical reason, that is, to complete his picture of himself.JANE GLEESON-WHITEWell, I'm not sure that he's... See, I think there's a really telling quote that Scott Fitzgerald says about himself and Zelda. He says, 'Sometimes I don't know whether Zelda and I are real or whether we are characters in one of my novels.' And I think Gatsby has that same, you know...

Skip Reske - ESL-BITS.NET - ESL English Listening - Audiobooks - Listen to a Book and Read Along - fast and slow listening speeds. The Great Gatsby and the American dream. In the New York Times earlier this year, Paul Krugman wrote of an economic effect called "The Great Gatsby curve," a graph that measures fiscal inequality against social mobility and shows that America's marked economic inequality means it has correlatively low social mobility. 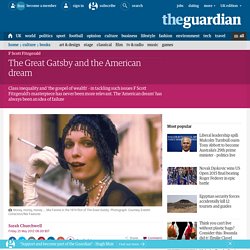 In one sense this hardly seems newsworthy, but it is telling that even economists think that F Scott Fitzgerald's masterpiece offers the most resonant (and economical) shorthand for the problems of social mobility, economic inequality and class antagonism that we face today. Nietzsche – whose Genealogy of Morals Fitzgerald greatly admired – called the transformation of class resentment into a moral system "ressentiment"; in America, it is increasingly called the failure of the American dream, a failure now mapped by the "Gatsby curve". "How would you place them? " she exclaimed. "Great ladies, bourgeoises, adventuresses - they are all the same. Suddenly she pointed to an American girl going into the water: The Great Gatsby - The Books - The Book Club - ABC TV. Penguin Book Club Presents: The Great Gatsby. The Great Gatsby.

Introduction to the Book F. 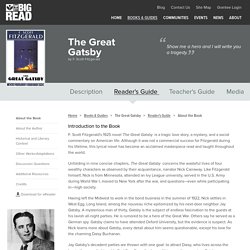 Scott Fitzgerald's 1925 novel The Great Gatsby is a tragic love story, a mystery, and a social commentary on American life. Although it was not a commercial success for Fitzgerald during his lifetime, this lyrical novel has become an acclaimed masterpiece read and taught throughout the world.