Wall in the Head - BBC radio documentary. Anna Funder's World of Stasiland seems impossible today. Stasiland, by Anna Funder It's difficult, almost impossible, for us to place ourselves in the world that is Stasiland. 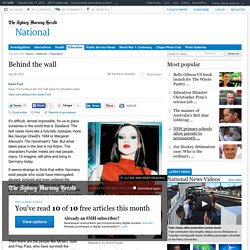 The text reads more like a futuristic dystopia; more like George Orwell's 1984 or Margaret Atwood's The Handmaid's Tale. But what takes place in the text is not fiction. The characters Funder meets are real people; many, I'd imagine, still alive and living in Germany today. It seems strange to think that within Germany exist people who could have interrogated, abused, tortured and even ordered the execution of others. Stasiland - Reading Australia. Publisher's synopsis Truth can be stranger – and more fascinating – than fiction. 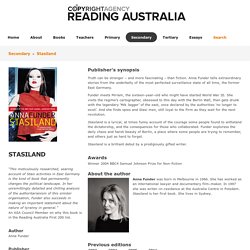 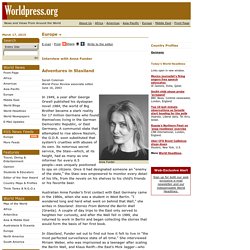 A communist state that attempted to rise above Nazism, the G.D.R. soon substituted that system’s cruelties with abuses of its own. Its notorious secret service, the Stasi—which, at its height, had as many as one informer for every 6.5 people—was uniquely positioned to spy on citizens. Once it had designated someone an “enemy of the state,” the Stasi was empowered to monitor every detail of his life, from the novels on his shelves to his child’s friends or his favorite beer.

Australian Anna Funder’s first contact with East Germany came in the 1980s, when she was a student in West Berlin. Article Continues I think it helped enormously. It varied. Well, it’s an interesting issue. Anna Funder, author of Stasiland, on life since Berlin Wall collapsed. Terry Lane interviews Anna Funder - Big Ideas. Terry Lane: This is Terry Lane with you on Radio National and Radio Australia, with the second of six conversations with some very special guests, in fact my producer and I have been given carte blanche to choose the people we would like to talk to, and you can't get a greater privilege than that. 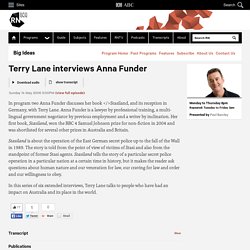 And among the people with interesting experiences and insights we have on our list, Anna Funder. Ms Funder is a lawyer by professional training, a multilingual government negotiator by previous employment, and a writer, currently by inclination. Anna Funder's first book, Stasiland, won the BBC-4 Samuel Johnson Prize for non-fiction in 2004. Stasiland was also shortlisted for several other prizes in Australia and in Britain. Stasiland is about the operation of the East German secret police up to the fall of the Wall in 1989. Podcast talk with Anna Funder on East Germany. Click on the player below to listen to the podcast talk with Anna Funder on East Germany. 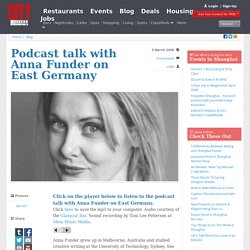 Click here to save the mp3 to your computer. Audio courtesy of the Glamour Bar. Sound recording by Tom Lee Pettersen at Meta Music Media. Anna Funder grew up in Melbourne, Australia and studied creative writing at the University of Technology, Sydney. She first moved to Germany as the recipient of a DAAD Scholarship (German Government Academic Exchange Service Award), later returning on a fellowship from the Australian German Association. Stasiland by Anna Funder: VCE Sunday School with Libbi Gorr - ABC Melbourne - Australian Broadcasting Corporation. This contemporary novel tells stories from the world's most sophisticated surveillance state, East Germany. 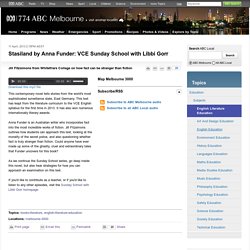 This text has leapt from the literature curriculum to the VCE English syllabus for the first time in 2013. It has also won numerous internationally literary awards. Anna Funder is an Australian writer who incorporates fact into the most incredible works of fiction. Jill Fitzsimons outlines how students can approach this text, looking at the morality of the secret police, and also questioning whether fact is truly stranger than fiction. Could anyone have ever made up some of the ghastly, cruel and extraordinary tales that Funder uncovers for this book? As we continue the Sunday School series, go deep inside this novel, but also hear strategies for how you can approach an examination on this text. If you'd like to contribute as a teacher, or if you'd like to listen to any other episodes, visit the Sunday School with Libbi Gorr homepage.

Anna Funder - ABC Conversations with Richard Fidler. Anna Funder is the author of the award-winning "Stasiland" and a novel "All That I Am". 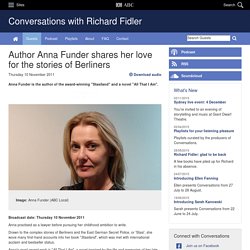 Broadcast date: Thursday 10 November 2011 Anna practised as a lawyer before pursuing her childhood ambition to write. Drawn to the complex stories of Berliners and the East German Secret Police, or 'Stasi', she wove many first-hand accounts into her book "Stasiland", which was met with international acclaim and bestseller status. Anna's most recent work is "All That I Am", a novel inspired by the life and memories of her late friend, Ruth Blatt. Ruth was a courageous German Jew who before migrating to Melbourne, had belonged to a group of dissidents against Hitler's rise. All That I Am is published by Penguin.

Texts in the City: Stasiland — The Wheeler Centre. Anna Funder » Stasiland. ‘Anna Funder explores, in the most humane and sensitive way, lives blighted by the East German Stasi. 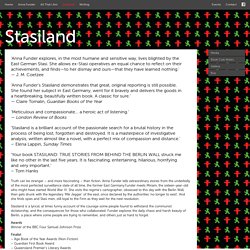 She allows ex-Stasi operatives an equal chance to reflect on their achievements, and finds—to her dismay and ours—that they have learned nothing.’ — J. M. Coetzee ‘Anna Funder’s Stasiland demonstrates that great, original reporting is still possible. She found her subject in East Germany, went for it bravely and delivers the goods in a heartbreaking, beautifully written book.

‘Meticulous and compassionate… a heroic act of listening.’— London Review of Books ‘Stasiland is a brilliant account of the passionate search for a brutal history in the process of being lost, forgotten and destroyed. ‘Your book STASILAND: TRUE STORIES FROM BEHIND THE BERLIN WALL struck me like no other in the last five years. Truth can be stranger – and more fascinating – than fiction. Awards Winner of the BBC Four Samuel Johnson Prize.