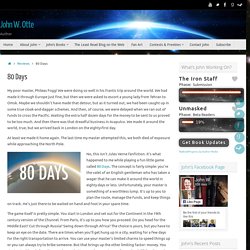 We were doing so well in his frantic trip around the world. We had made it through Europe just fine, but then we were asked to escort a young lady from Tehran to Omsk. Maybe we shouldn’t have made that detour, but as it turned out, we had been caught up in some true cloak-and-dagger schemes. And then, of course, we were delayed when we ran out of funds to cross the Pacific.

Waiting the extra half dozen days for the money to be sent to us proved to be too much. At least we made it home again. No, this isn’t Jules Verne fanfiction. The game itself is pretty simple. What really makes this game interesting, though, is the story. What’s more, you can play your character to your liking. But unfortunately, there is a fly in the ointment: the game does get a bit repetitious in the early going. Don’t get me wrong. 80 Days is a fun (if a bit repetitious) video game you should check out! Like this: Like Loading... Cheat Happens PC Game Trainers. Options: Infinite Health Unlimited Money March 14, 2016 Game Version: 1.11s+ Distribution(s): Compatibility: Windows 7 and above (may be compatible with additional versions) Contributor: Downloaded: 330 times Rating: Virus Scan: This cheat has been scanned and is virus and adware free. 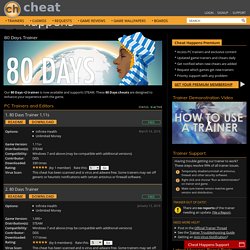 A storm has pushed the ship Phileas Fogg and I are travelling on off course, and the captain has decided to head for Honolulu instead of San Francisco. We don't have time for such a diversion. We are, after all, trying to circumnavigate the globe in under 80 days. It's not going well though. I keep saying the wrong thing, turning possible allies against me as I try to drum up enough support to overthrow the ship and make sure it goes to its intended destination. We're already short of money, short on time, and short on pretty much everything apart from shaving cream and wool trousers.

Travel log The game is essentially a choose your own adventure book, albeit presented with the sort of swagger and literacy that some examples of the genre can't muster. The story is set in a steampunk world filled with incredible contraptions and fantastic characters. You play Fogg's manservant, Passepartout. Lost in a good way. Tips and Tricks - 80 Days Wiki Guide. Since 80 Days launched, players have discovered a number of Tips, Tricks, and Easter Eggs at obscure locations along the game’s branching pathways. 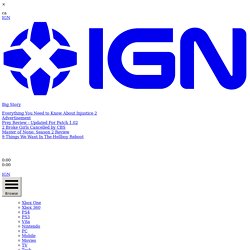 We’ve secured hints to a number of well-hidden scenarios and outcomes and how to reach them. 80 Days is a game filled with people to meet; some real, some famous, some fictional. One is Verne’s own Captain Nemo who can be found piloting the Nautilus in the waters off the coast of Africa. But be warned, he plans to travel a lot further than 20,000 leagues. Found by 1.479 players. Each time you complete the game, new routes open up.

On an airship in Europe you can catch the eye of one Elsa Ekéus, who is very keen to get married and will not take no for an answer. War is coming to Europe, and the city of Belgrade is the first casualty. But once there, perhaps you can change the fate of the rag-tag Serbian resistance? 80 Days (2014 video game) - Wikipedia. In 80 Days, players have to make choices that impact the direction the story takes. 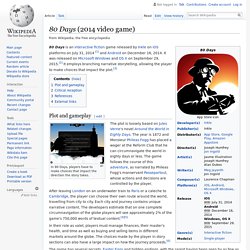 The plot is loosely based on Jules Verne's novel Around the World in Eighty Days. The year is 1872 and Monsieur Phileas Fogg has placed a wager at the Reform Club that he can circumnavigate the world in eighty days or less. The game follows the course of this adventure, as narrated by Phileas Fogg's manservant Passepartout, whose actions and decisions are controlled by the player. Official website. 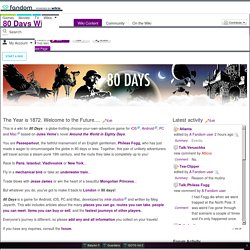 Welcome to the Future.... Edit This is a wiki for 80 Days - a globe-trotting choose-your-own-adventure game for iOS, Android, PC and Mac based on Jules Verne's novel Around the World in Eighty Days. You are Passepartout, the faithful manservant of an English gentleman, Phileas Fogg, who has just made a wager to circumnavigate the globe in 80 days or less.

Together, this pair of unlikely adventurers will travel across a steam-punk 19th century, and the route they take is completely up to you! Race to Paris, Istanbul, Vladivostok or New York... Fly in a mechanical bird or take an underwater train... Trade blows with Jesse James or win the heart of a beautiful Mongolian Princess... Let's Play 80 Days - Ep1: And We're Off! Review: 80 Days (Steam) 80 Days launch trailer.