So you want to be an artist? Then let the pros show you how it's done. ‘I went home mortified, crying my eyes out. 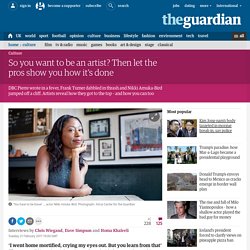 But you learn from that’ The actor: Nikki Amuka-Bird, 40, has performed with the RSC and starred in Luther, NW and Denial. So you want to be an artist? Then let the pros show you how it's done. You Can Produce a Staged Reading of Your Screenplay – Here’s How. Actors (from left) Ross Buran, Madeline Zima, Betsy Sodaro and Abbey McBride read through a feature length screenplay in front of a live audience. 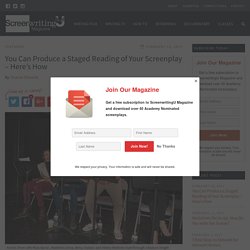 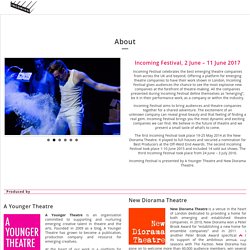 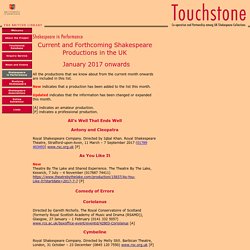 New indicates that a production has been added to the list this month. Updated indicates that the information has been changed or expanded this month. The Two Angry Women of Abington. Christopher Marlowe credited as one of Shakespeare's co-writers. The long-held suggestion that Christopher Marlowe was William Shakespeare is now widely dismissed, along with other authorship theories. 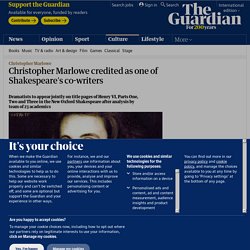 But Marlowe is enjoying the next best thing – taking centre stage alongside his great Elizabethan rival with a credit as co-writer of the three Henry VI plays. The two dramatists will appear jointly on each of the three title pages of the plays within the New Oxford Shakespeare, a landmark project to be published by Oxford University Press this month. MEET THE READER: What I Look For. Ray Morton is a writer, senior contributor to Script Magazine and script consultant. 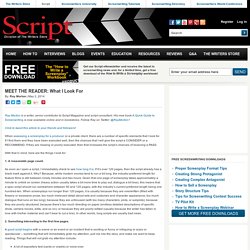 His new book A Quick Guide to Screenwriting is now available online and in bookstores. Follow Ray on Twitter: @RayMorton1 Click to tweet this article to your friends and followers! 38 Reasons Why Your Screenplay Isn't Getting Recommended by a Script Reader. The first audience for your screenplay (besides yourself) is a reader. 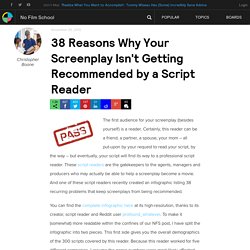 Certainly, this reader can be a friend, a partner, a spouse, your mom -- all put-upon by your request to read your script, by the way -- but eventually, your script will find its way to a professional script reader. These script readers are the gatekeepers to the agents, managers and producers who may actually be able to help a screenplay become a movie. And one of these script readers recently created an infographic listing 38 recurring problems that keep screenplays from being recommended. All Your Characters Talk The Same — And They're Not A Hivemind! "He Said, She Said": Is There Any Cooler Way To Show Dialog In Fiction? Great Opening Sentences From Science Fiction Novels.

William Gibson On the Apocalypse, America, and The Peripheral’s Ending. 33 Sci-Fi Stories by Philip K. Dick as Free Audio Books & Free eBooks. 20 Screenwriting Tricks And Tropes We Never Need To See Again. 10 Tips And Tricks For Creating Memorable Characters. The Key To Better Work? E-mail Less, Flow More. Have you ever felt like all you do is check your e-mail? 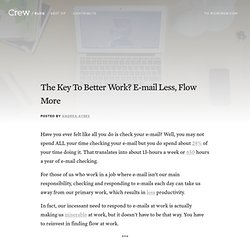 Well, you may not spend ALL your time checking your e-mail but you do spend about 28% of your time doing it. That translates into about 13-hours a week or 650 hours a year of e-mail checking. You Are Not a Storyteller. A video has been making the rounds that seems to have quite a few people riled up. 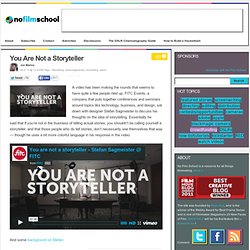 FITC Events, a company that puts together conferences and seminars around topics like technology, business, and design, sat down with designer Stefan Sagmeister to discuss his thoughts on the idea of storytelling. Essentially he said that if you’re not in the business of telling actual stories, you shouldn’t be calling yourself a storyteller, and that those people who do tell stories, don’t necessarily see themselves that way — though he uses a bit more colorful language in his response in the video: And some background on Stefan: Stefan Sagmeister formed the New York based Sagmeister Inc. in 1993 and has since designed for clients as diverse as the Rolling Stones, HBO and the Guggenheim Museum. Having been nominated eight times, he finally won two Grammy Awards for the Talking Heads and Brian Eno & David Byrne package designs.

What Makes a Character Sympathetic? This Video Essay from Screentakes Explains. One of the most challenging aspects of screenwriting is creating multidimensional characters that your audience can identify with, relate to, and be entertained by. 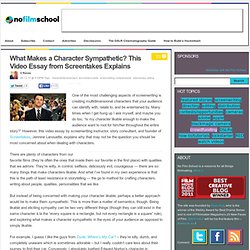 Many times when I get hung up I ask myself, and maybe you do too, “Is my character likable enough to make the audience want to root for him/her throughout the entire story?” However, this video essay by screenwriting instructor, story consultant, and founder of Screentakes, Jennine Lanouette, explains why that may not be the question you should be most concerned about when dealing with characters. There are plenty of characters from our favorite films (they’re often the ones that made them our favorite in the first place) with qualities that we admire.

They’re witty, in control, selfless, deliciously evil, courageous — there are so many things that make characters likable. But instead of being concerned with making your character likable, perhaps a better approach would be to make them sympathetic. Martin Scorsese Breaks Down the Difference Between Story & Plot. What is story? What is plot? Strategies to Make Sure You Actually Finish That Novel.