NYC FLOW. GitHub - manuelruder/artistic-videos: Torch implementation for the paper "Artistic style transfer for videos" ɷHigh dynamic range digital photography by QUIASMA. CeroNoice - HDR tool inspired from ZeroNoise. After having some trouble getting ZeroNoise working, I coded my own version of the algorithm (well, only the part I understood) and ran a little experiment to check whether you should really take as many brackets as you can, or whether you can get away with just 2 or 3 pictures spaced at 4 EV or more. 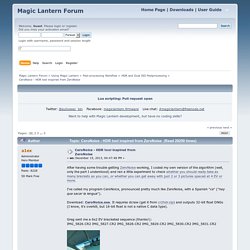 I've been talking a lot about offline/online workflows lately -- how they have, in principle, been used for ages, and still play today, tape or no tape. 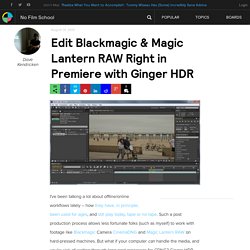 Such a post production process allows less fortunate folks (such as myself) to work with footage like Blackmagic Camera CinemaDNG and Magic Lantern RAW on hard-pressed machines. But what if your computer can handle the media, and you're sick of waiting through long post processes for CDNG? Ginger HDR may be the solution for you. The plugin allows native editing of CinemaDNG, and now, even ML .RAW files directly, in Adobe Premiere Pro and After Effects.

One user has also devised a work-around for developing CDNG with the powerful Adobe Camera RAW interface, after native Premiere editing. Ginger HDR isn't a new plugin, but it's worth posting about here for those who haven't heard of it yet -- I'm pretty late to the party myself. First, here's a video by John Hable of 19lights, creators of Ginger HDR, explaining basic CinemaDNG support. RAWMagic. RAWMagic Lite. An Image Sharpening Trick You Must Try. Facebook24 Twitter20 Google+2 Pinterest3 Using Topaz DeNoise to sharpen an image? 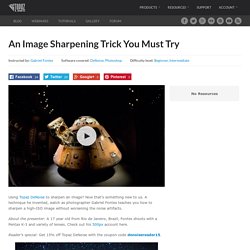 Now that’s something new to us. About the presenter: A 17 year old from Rio de Janeiro, Brazil, Fontes shoots with a Pentax K-3 and variety of lenses. Reader’s special: Get 15% off Topaz DeNoise with the coupon code denoisereader15. Was this tutorial helpful to you? (26 votes, average: 4.69 out of 5) Loading ... Share this No Resources 2 Comments نور ابو ديبReply ↓ Gord Marshall Very well done, definitely going to give this a try….Thanks GabrielReply ↓ Know-How Transfer’s Videos on Vimeo. The Basics Of Luminosity Masks In Digital Blending. Jimmy McIntyre is travel photographer. 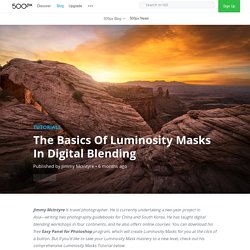 He is currently undertaking a two-year project in Asia—writing two photography guidebooks for China and South Korea. He has taught digital blending workshops in four continents, and he also offers online courses. You can download his free Easy Panel for Photoshop program, which will create Luminosity Masks for you at the click of a button. But if you’d like to take your Luminosity Mask mastery to a new level, check out his comprehensive Luminosity Masks Tutorial below. by Jimmy McIntyre One day, in the hopefully not-too-distant future, we will carry with us a camera so light and compact that younger generations will laugh at the way we once lugged huge bricks across vast distances to capture a timeless moment. Modern cameras aren’t too far from that now. Magic Lantern HDR RAW - Canon 550D - Set on Fire. 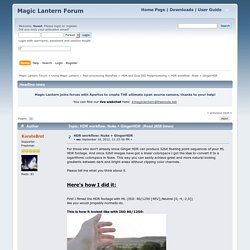 And since 32bit images have got a linear colorspace I got the idea to convert it to a logarithmic colorspace in Nuke. This way you can easily achieve great and more natural looking gradients between dark and bright areas without clipping color channels. Okada Shares HDRI Discoveries - Parallax View. A scene from the HDRI test film Emma. 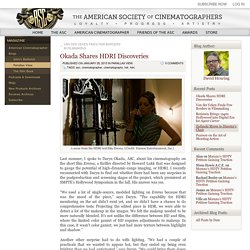 (Credit: Pannon Entertainment, Inc.) Last summer, I spoke to Daryn Okada, ASC, about his cinematography on the short film Emma, a thriller directed by Howard Lukk that was designed to gauge the potential of high-dynamic-range imaging, or HDRI. I recently reconnected with Daryn to find out whether there had been any surprises in the postproduction and screening stages of the project, which premiered at SMPTE’s Hollywood Symposium in the fall. His answer was yes. “We used a lot of single-source, modeled lighting on Emma because that was the mood of the piece,” says Daryn. Magic Lantern Ginger HDR Workflow.